Perhaps the only vaguely surprising thing about Yolande Knell’s promotion of the tried and trusted theme of a shortage of medical supplies in Gaza in her July 8th filmed report for BBC television news was the fact that she did not wait longer than a few hours after Operation Protective Edge commenced before producing it.
The report was also publicised on the BBC News website’s Middle East page under the title “Gaza doctors ‘running out of medicine’ to treat civilians” and the same topic was also promoted in another report by Knell for BBC television news. 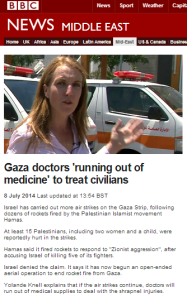 “In the past few hours here in the Gaza Strip we’ve heard the loud thuds of a lot of Israeli airstrikes. And what you see afterwards is the ambulances that come whizzing by. Many of them come here – to the Shifa hospital in Gaza City – and we’ve been speaking to the doctors in the hospital. They tell us the kinds of injuries they’re seeing are of civilians who have bad shrapnel injuries. And what they’re worried about at the moment is if this crisis continues, they say they’re going to run out of medical supplies very quickly. That’s because already there are tight border restrictions imposed by Israel and Egypt. They say they don’t have enough medicines and that their fuel is running low to run the generators. Already they’ve full occupancy in the hospital. So these are very tense times here. It’s a real hive of activity as they try to prepare for whatever happens next.” [emphasis added]

The situation is further exacerbated by the fact that medical suppliers are often reluctant to sell supplies to Gaza due to issues of non-payment.

COGAT works to facilitate the transfer of medication and medical supplies both through the international community and the private sector, however shortages remain.”

Further, BBC Watch inquired on July 9th regarding the entry of goods into the Gaza Strip during Operation Protective Edge and was informed by a Ministry of Defence official that: [emphasis added]

“Border crossings into Gaza are open but for limited use.  Kerem Shalom and Erez crossings are open for emergency medical assistance and the transfer of humanitarian aid (i.e. televisions, appliances etc. are not being let in, but food, medicine etc. is).  Yesterday alone [the day of Knell’s report – Ed.] more than 180 trucks crossed into the Gaza Strip via the border crossings.  Red Cross workers can pass when necessary, but access for reporters is conditional on the security situation and must be coordinated a few hours beforehand.”

Notably, that same theme of a shortage of medical supplies is being promoted in other Western media sources too; a fact which of course should have prompted Yolande Knell to do some more serious fact checking before she repeated the information she was given by staff at a Hamas-linked hospital.
And what of Knell’s other topic – a shortage of fuel? Well, as has frequently been documented here in the past, that problem too is due to Fatah-Hamas infighting and has absolutely nothing to do with “tight border restrictions”.
Clearly millions of BBC viewers and website visitors have been misled by this report by Yolande Knell. A prominent public correction is therefore in order.
Related Articles:
The BBC’s unhealthy reliance on information from medics in Gaza
BBC gives one-dimensional view of shortages in Gaza hospitals