On the evening of July 15th the BBC’s Middle East editor Jeremy Bowen sat on a roof in Gaza and witnessed just one of the many instances (around 10 -15%) in which missiles fired by terrorist organisations in the Gaza Strip fall short of their target and land inside the territory.

The IDF informs us that since the start of Operation Protective Edge, some 100 missiles fired by terrorist groups have fallen short, landing inside the Gaza Strip. 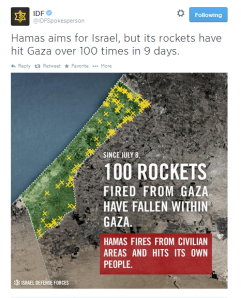 As recently as June 24th a three year-old girl was killed and other members of her family injured when a shortfall missile fired by terrorists hit their home in Beit Lahiya. That incident (along with others) was not reported by the BBC at the time.
The BBC does however know from previous experience that misfired and shortfall missiles cause the deaths of civilians in the Gaza Strip.
Despite that, in all the BBC’s extensive reporting of Operation Protective Edge that we have seen so far, no attempt has been made to inform BBC audiences of the factor of shortfall missiles and to clarify to them that the casualty figures it quotes will – according to the source of its figures – include civilian deaths caused by missiles fired by terrorist organisations in the Gaza Strip.
Neither has the BBC told its audiences about the interest of Hamas (including of course its health ministry, which the BBC regularly quotes on the issue of casualty figures) in promoting as many civilian casualties as possible to the watching world, as chillingly demonstrated in this July 13th Al Aqsa TV interview with Hamas spokesman Sami Abu Zuhri.

0 replies on “Why doesn't the BBC tell audiences about Gaza's shortfall missiles?”