On September 15th a big feature titled “Gaza: Life amid the rubble” by Yolande Knell and no fewer than eight additional contributors appeared on the BBC News website’s main homepage and on its Middle East page, with the item being heavily promoted on various BBC Twitter accounts.

Almost two months on – and long after clarification of the circumstances of the battles in Shuja’iya – the BBC continues to misrepresent the events as partially as it did at the time, promoting many of the same themes which were evident in its initial reporting from the district. 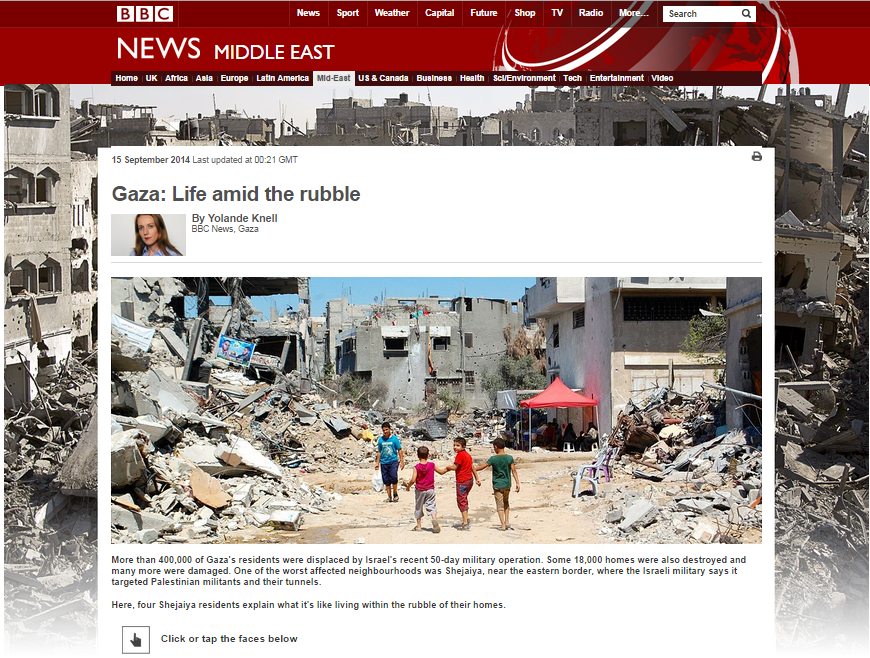 The feature – which includes text, video and photographs – opens:

“More than 400,000 of Gaza’s residents were displaced by Israel’s recent 50-day military operation. Some 18,000 homes were also destroyed and many more were damaged. One of the worst affected neighbourhoods was Shejaiya, near the eastern border, where the Israeli military says it targeted Palestinian militants and their tunnels.”

Note how this conflict has been turned into “Israel’s recent 50-day military operation” with all mention of the missile attacks on the civilian population of Israel – which not only sparked the conflict but persisted until its final minutes – erased from the picture presented to BBC audiences. Notably, another article appearing on the BBC News website the previous day similarly referred to “Israel’s bombardment of Gaza in July” – suggesting that such framing is not coincidental.

As has been the case in all of its reporting from the Gaza Strip since July 8th, the BBC continues in this item to conceal from audience view the issue of buildings deliberately booby-trapped by Hamas and other terrorist organisations or those hit by missiles misfired by terrorists or destroyed as a result of their being used to store explosives. BBC audiences are hence led towards the mistaken belief that every single structure damaged or destroyed in the Gaza Strip during the seven weeks of conflict was the result of Israeli actions.

Once again, the BBC fails to adequately inform audiences of the true scale of Hamas operations in Shuja’iya, opting instead for its usual “Israel says” formulation. The fact is of course that the only reason fighting – and the resulting damage – occurred in Shuja’iya was because Hamas had turned it into a neighbourhood replete with military targets, including entrances to some ten cross-border attack tunnels, ammunition and weapons stores, missile launching sites and command and control centres.

“The crowded eastern district of Shejaiya in the Gaza Strip saw one of the bloodiest days of the recent conflict. Israel told the 80,000 residents to leave before it targeted the area. However, many did not believe the assault would be so serious and remained in their homes.”

Indeed, Israel did advise the residents of Shuja’iya to leave their homes four days before the operation there commenced and even delayed it in order to give people additional opportunity to relocate. This BBC report, however, deliberately misrepresents the reason why some residents failed to heed that advice, claiming that “many did not believe the assault would be so serious” and thereby concealing from BBC audiences the fact that Hamas ordered civilians to stay put. This deliberate distortion of the facts dovetails with the BBC’s policy – evident throughout coverage of the conflict – of downplaying and even denying Hamas’ use of human shields.

The feature goes on:

“On the night of Saturday 19 July, Shejaiya was pounded with heavy artillery, mortars and air strikes sending up columns of thick, black smoke. Within 24 hours, dozens of Palestinians and at least 13 Israeli soldiers were killed.

From early on Sunday morning there were chaotic scenes as thousands of local people tried to flee. They headed to Gaza City, searching for shelter at United Nations’ schools and at the main Shifa hospital, which was overwhelmed with casualties.

Battles erupted between Israeli troops and Hamas militants in the streets. Israel’s officials say the residential neighbourhood contained a fortified network of tunnels used for attacks and to produce and store rockets. The Palestinian government has described the killing of civilians as a “heinous massacre”.”

Details of the events in Shuja’iya on the night of July 19th and the day of July 20th have been in the public domain for many weeks now and so there is no excuse whatsoever for the BBC’s above incoherent account which misrepresents the sequence of events, downplays Hamas’ actions and yet again misleadingly presents the crucial issue of Hamas’ deliberate location of military assets in the Shuja’iya district in terms of “Israel says”.

Knell’s report goes on to show a graphic illustrating the locations of the houses of the four people later interviewed. 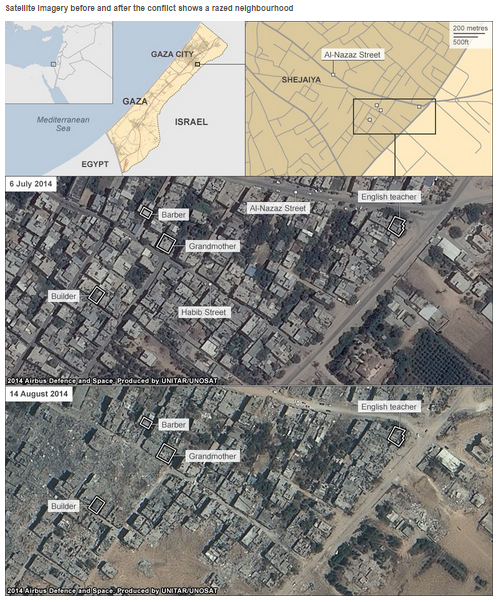 What that graphic of course does not show is the context of Hamas activity such as missile launching or the locations of the entrances to any of the cross-border tunnels found in the same area. Of the four houses showcased on that graphic, one is described as belonging to a “Grandmother” who, readers are later told, “lost one of her sons, Ismail, in the latest conflict”.

The photographs accompanying the section on the Grandmother include one of what the BBC describes as “a poster in his memory”. As sharp-eyed readers will be able to see, that poster includes the logo of Hamas’ Izz a Din Al Qassam Brigades, which could go a long way towards explaining what Ismail was doing “on the top floor of their four-storey building” and why “it came under heavy bombardment”, although Yolande Knell does not trouble her readers with such inconvenient details which would distract them from her story.

“Now the battered district stands as a reminder of the ferocity of the latest fighting and Gaza’s unsolved political problems. Locals, like the four featured below, long to rebuild their homes but are unable to do so while tight border restrictions imposed by Israel and Egypt remain in place. Israel says these are for security reasons. It is worried militants will use construction supplies to rebuild tunnels and it currently allows very limited imports for international projects.”

As was noted here only recently:

“If there is one thing which should have become perfectly clear to foreign journalists since the beginning of July it is that the entry of building supplies into the Gaza Strip – which was increased in recent years due to intense pressure from assorted international bodies and aid agencies – was abused by Hamas to construct cross-border attack tunnels rather than for the advancement of projects which would have improved the lives of the people of Gaza.

However, not only has the BBC shown no interest whatsoever in discussing Hamas’ misappropriation of those building supplies or the very serious subject of the accountability of the aid agencies and international bodies which were supposed to be supervising and guaranteeing the construction projects for which those materials were destined; it continues to present the issue in terms of “Israel says”.”

Rather than investing the work of the nine BBC staff members it took to produce this feature in an in-depth investigation of how considerable sums of European tax-payers’ money has been misappropriated by Hamas over the years, the BBC has instead produced a feature designed solely to feed BBC audiences with yet more out of context images of rubble and damage in the Gaza Strip and to continue the campaign being promoted by the BBC in general – and Yolande Knell in particular – with regard to the border restrictions made necessary by the very terrorism which also brought about those images.

Themes in BBC reporting on events in Shuja’iya

BBC’s Reynolds in Shuja’iya: still no reporting on what really happened

Reporter in the rubble: what is missing from BBC presentation of structural damage in Gaza?