Several readers have brought to our attention instances of the BBC’s recent employment of what is known as the Expedited Complaints Procedure. According to that BBC protocol (introduced in June 2012 – see Annex B): 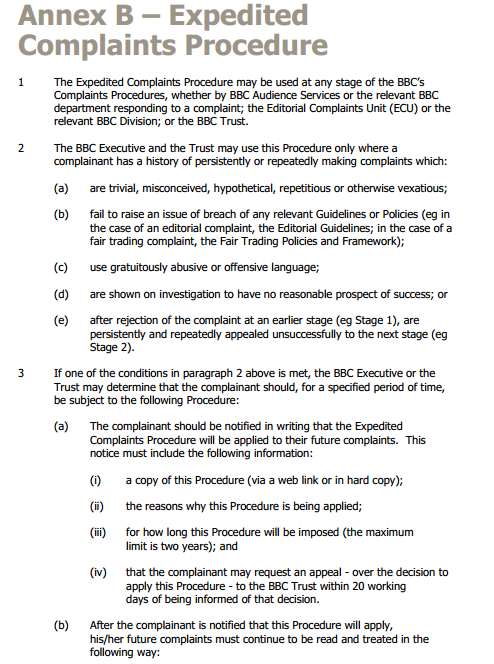 In one case a correspondent has had his access to the BBC complaints system limited until September 2016 and in another case a reader has been informed by the BBC that the Expedited Complaints Procedure will be applied to his complaints in the coming two years on the basis of clauses (d) and (e) in the above protocol.

“(d) are shown on investigation to have no reasonable prospect of success; or

Of course the body which rules whether or not a complaint has a “reasonable prospect of success” and which rejects or accepts an appeal is none other than the self-regulating BBC itself.

The concept of stakeholders in an organisation they are obliged to fund by law being subjected to limitations on complaints on the basis of arbitrary decisions made by that same self-regulating organisation is surely one which is worthy of public debate ahead of the renewal of the BBC’s Royal Charter in 2016.