The BBC has given quite a lot of column space and airtime to the topic of the closure of Temple Mount to visitors in order to reduce the likelihood of violence in Jerusalem after the attempted murder of Rabbi Yehuda Glick on October 29th and we will be addressing aspects of that coverage in due course. However, one particularly egregious inaccuracy deliberately promoted on a variety of BBC platforms deserves separate discussion.

On October 30th a filmed report for BBC television news by the BBC Jerusalem Bureau’s Quentin Sommerville was published on the BBC News website under the title “Abbas: Mosque closure a ‘declaration of war’“. Sommerville opens his report as follows:

“Tear gas on the streets of East Jerusalem. These young men – few, but angry – rioted after the killing this morning of their neighbour. The trouble in Abu Tor continued as the body of Mua’taz Hijaz [sic] was taken away. He was killed by police on the roof of his home. They blame him for the attempted killing of a Right-wing Jewish activist. His cousin Maram was in the building when he was killed.”

The report then cuts to footage of Maram Hijazi saying:

“They took him and they take…took him upstairs and then they shot him. They killed him. No, we don’t know if there anything…any attack between them…by guns.”

No effort is made by Sommerville to present viewers with an official Israeli reply to those allegations.

Also on October 30th the BBC World Service programme ‘Newshour’ included an item on the same topic (available from 00:40 here). In that report presenter James Menendez introduces an interviewee as follows:

“Jawad Siam is a resident of Silwan neighbourhood where Mua’taz Hijazi – the Palestinian suspect – was killed.”

Siam: “Very early in the morning today we heard shooting – a lot of shooting. And then some people started calling, telling someone is killed by the Israeli forces. We move to the house where we saw the body laying down and the soldiers started to close the street of the village of Silwan. The guy was attacked by many Israeli forces and was killed. For us and for people here it was very clear that Mua’taz Hijai who was killed could have been arrested. He could be arrested.”

What Menendez – in clear breach of BBC editorial guidelines on impartiality – does not bother to tell the millions of people listening to his programme is that Jawad Siam (who has been interviewed by the BBC before) is a political activist.

Next listeners hear an audio report from Quentin Sommerville who, in response to a request from Menendez for more information about Mua’taz Hijazi, says:

“Spoke to some of his family members earlier this morning. He’d been in prison for a number of years. His family say that he was…that it was around 5:30 this morning that Israeli security forces entered the home, that they grabbed him, they took him to the roof – or he went to the roof – and it was there….and we’ve seen the spot where he was shot dead. There were a number of bullet holes. The blood on the ground had just been cleared up. Neighbours we spoke to say that he was unarmed. They said they didn’t see him possessing a weapon at the time. However, the Israeli security forces say that there was a gunfight and that he was killed in that gun-battle.”

On October 31st an article appeared on the BBC News website under the title “Israel promises to reopen Jerusalem holy site amid tension”. The report underwent numerous changes throughout the day and now appears with the headline “Jerusalem holy site is reopened amid tension“. A passage appearing in versions one and two of the report read as follows:

However, his cousin alleges that he was shot by police after being detained in the house.”

In versions three to six inclusive the wording was changed to read: 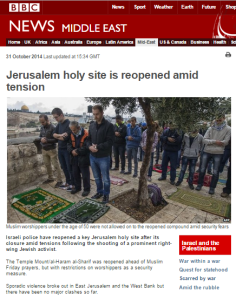 “Mr Hejazi’s cousin alleges that he was shot by police after being detained within his house. Israeli police say Mr Hejazi was killed after he began shooting at police who then opened fire in response.”

So let’s recap on what BBC audiences have been told in these reports. They have been led to believe that Hijazi may not have been armed and that – rather than arresting him – the Israeli security forces took him up to the roof of the house and there shot and killed him. Whilst some – but not all – of the reports present the Israeli police force’s statement on the incident, the BBC affords much more airtime to the promotion of what is ultimately an allegation that a possibly unarmed man was summarily executed. That very serious accusation is enthusiastically amplified by the BBC to millions on multiple platforms despite the fact that it has not independently verified the accounts provided by interested parties including family members, anonymous neighbours and a known anti-Israel political activist who stood trial a few years ago for assaulting a man he suspected of selling property to Jews.

BBC Watch contacted the spokesman for the Israeli police force with regard to the claims made in these BBC reports and was informed that Hijazi was indeed armed and that when the police force surrounded the building with the intent of making an arrest, he opened fire at them. Counter terrorism police responded by shooting the suspect.

It is the officially defined task of the BBC to enable audiences to reach an “understanding of international issues”. In order to do that, it is obviously necessary for the BBC to filter out the rumours, myths, conspiracy theories and gossip surrounding any story and to present audiences with only the verified facts.

If instead the BBC elects indulge its own political predilections and to jettison its obligations to accuracy and impartiality by uncritically amplifying any and every hearsay and propaganda of the genre which members of its funding public could easily find for themselves on a plethora of websites of one type or another without paying £145.50 a year for the pleasure, then – quite frankly – it renders itself irrelevant.