War On Want is one of Britain's most respected charities but it is, sadly, now being run by people determined to import the Israeli-Palestinian conflict onto the streets of Britain.


With Jews being murdered in France, Belgium and Denmark there’s an ominous feeling that British Jews are awaiting their own round. With that in mind a group of concerned British Jews from Jewish Human Rights Watch protested this morning outside the offices of War On Want in central London (see above).
War On Want is one of Britain’s most respected charities but it is, sadly, now being run by people determined to import the Israeli-Palestinian conflict onto the streets of Britain.
Quite unbelievably, after what has happened this weekend and in Belgium and Paris, War On Want’s current campaign includes handing out fake guns to students to help mark what is sickeningly termed “Israeli Apartheid Week” which begins next week on British university campuses. See the last line from WOW’s website below: 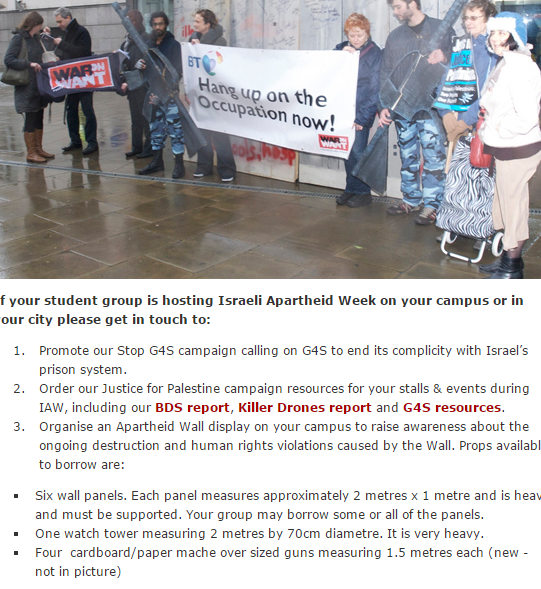 Many British Jews are feeling insecure and accuse WOW of helping to spread propaganda and hate against the Jewish State which could well lead to the events of Paris, Belgium and Denmark being repeated in the UK. They are asking: Is War on Want helping to promote a War On Jews?
I questioned John Hilary (see below), WOW’s executive director, about this and other issues as he approached his offices. As you can see Hilary refused to answer my questions about WOW handing out guns to British students, a two-state solution, Israel’s future or the bombing of innocent Israeli civilians by Hamas.

Instead he had the nerve to accuse me of “using the current attacks on Jews in Europe for political purposes to support the Zionist dream”.
Admittedly, my interviews skills need brushing up but it is infuriating when someone refuses to answer very simple questions when there is so much at stake.
[youtube https://www.youtube.com/watch?v=PoKDI6RWaYU]