In part one of this post we looked at the messaging concerning the JCPOA deal between the P5+1 and Iran as presented by the BBC’s Middle East editor on the day the agreement was finalised. In this post we will look at the portrayal of the same issue on the same day by another senior BBC journalist – chief international correspondent Lyse Doucet. 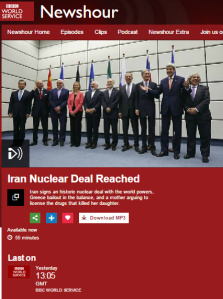 The July 14th edition of the BBC World Service radio programme ‘Newshour’ included an audio report by Doucet (from 05:00 here) which was presented by host Razia Iqbal as follows:

After that signposting, listeners would of course have expected to hear exactly that: the details of the deal. Instead, they actually heard a very superficial and uncritical account which appears to be based more on PR statements from the various parties involved than on objective examination of the document concerned.

Lyse Doucet: “Well, I think everyone on all sides, Razia, has emphasised the political sensitivity of this deal and a deal which runs up to nearly 100 pages with five annexes with lots of very, very [inaudible] technical details. It’s also studded through with very sensitive and highly political decisions.

And everything about Iran’s nuclear programme is very sensitive and it has committed itself to very significant restrictions. Reducing its centrifuges by two-thirds, reducing its breakout time as it’s called – its ability to produce the elements necessary for a bomb if it decided to do so – and it hasn’t – from two months to a year, submitting itself to rigorous inspections of its nuclear sites but also its non-nuclear sites as part of the additional protocol.”

Beyond the obvious grammatical point that breakout time has not been ‘reduced’, as Doucet claimed, but extended, one must wonder about the sourcing of her unequivocal claim that Iran has not “decided” to “produce the elements necessary for a bomb”. Equally notable is the fact that Doucet did not clarify to listeners that under the terms of the agreement limitations on centrifuges, enrichment work and other factors are subject to time limits.

“The concessions involving Iran’s development of advanced centrifuges starting in year eight are particularly alarming. Blaise Misztal, the director of the national security program for the Bipartisan Policy Center, told me this constituted a “step back.” Such advanced centrifuges can enrich a greater amount of uranium more rapidly than Iran’s antiquated IR-1 model centrifuges by orders of magnitude.

David Albright, a former weapons inspector who is now president of the Institute for Science & International Security, also told me the centrifuge concession was a surprise: “It seems to open a way for Iran to expand their advanced centrifuges earlier than I expected or wanted.” He predicted that the advanced IR-6 and IR-8 centrifuges Iran would be allowed to install by year 13, “would allow Iran to lower its break-out times down to days or a few weeks.””

“In exchange it [Iran] will get a lot. It will get a release of the punishing sanctions. We heard from Hassan Rouhani saying as Iran always says that the sanctions did not succeed but he conceded that they did have an impact on the everyday lives of Iranians. There’s an estimate that some $100 billion will, over time, once Iran carries out its implementation of this agreement, will be released into the Iranian economy.”

Doucet refrained from raising the question of how that cash injection will be used and whether the Iranian people will be the real beneficiaries of sanctions relief.  She went on:

“And there’s something else which is absolutely crucial for Iran. It’s summarized by one word that Javad Zarif has used time and time again. It’s called dignity. Iran wants the United Nations Security Council resolutions lifted which essentially paint it in the same corner as North Korea; as a pariah state. Iran wants to resume what it sees as its legitimate place in the region and in the international community. That’s why it was so important that the sanctions like the arms embargo will be lifted. Now Hassan Rouhani’s said it would be lifted but we understand under the terms of this deal – an issue that was very sensitive, particularly for the Western negotiators – that that arms embargo will not be lifted for another five to eight years.”

Doucet avoided any discussion of the potential effects of the lifting of the arms and missile embargoes on Iran’s role in destabilizing the region, including its support for terrorist organisations and the repressive Syrian regime. She went on to produce some very transparent uncritical messaging which clearly ignores the existence of any dissenting opinions.

“So this is meant to be a deal which is good for all sides and for all the players involved in this deal we heard from today that it’s not just a deal but a good deal and a deal that all sides have committed to implement.”

Further messaging was reinforced by means of a ‘question’ from Razia Iqbal:

“Lyse, it’s very interesting to hear President Obama very clearly say that this is not a deal that’s based on trust but it’s based on verification – which also goes to the heart of the dignity issue that Mr Zarif was talking about – because the verification is going to be a giving up of sovereignty to a certain extent by Iran or not?”

Doucet: “This is not an agreement based on trust. President Obama has said that repeatedly. This is an agreement based on verification. There is still deep distrust between two sides. This is not a rapprochement. This is not diplomatic…a new diplomatic moment for Iran and the United States in the sense of restoring diplomatic relations. This is a nuclear deal which allows them to deal with each other in a different way. Iran would say…we heard as Hassan Rouhani went through Iran’s nuclear sites centre by centre telling Iranians what Iran had agreed to and not agreed to. Iran has agreed to…they would say not a relinquishing of sovereignty but what is….what is actually set out is its commitments under the non-proliferation treaty with the IAEA and also the additional protocol which says that if there are legitimate grounds for suspicion that inspectors can get what – the phrase is managed access – to non-nuclear sites, be it a research laboratory, be it a military site, if they have grounds for suspicion, to check that there is not any covert activity taking place.”

Doucet failed to clarify to BBC audiences what ‘managed access’ actually means or that it requires 24-day notification in advance.

“The verification regime was meant to be the solid anchor of any nuclear deal. But what started out as a clear understanding that when facing a violator of the Non-Proliferation Treaty, the order of the day was “any time, any place” inspections, the negotiators ended up acquiescing to “managed access” that would be discussed in a committee including Iranian representation.”

“For example, let’s assume that there is an installation which is undeclared and the IAEA receives information based on intelligence that there are certain types of activities and equipment, and it wants to see them. I’m not so sure that it’s so clever to tell in advance what you know because the counterpart (Iran) can either mitigate the situation by removing the equipment – which is a concern – or sanitize the place, or prepare a cover story based on the information which is there. So this will undermine the credibility of some types of these inspections.”

“This was one of the most difficult issues in the negotiations. Including a demand to interview nuclear scientists in Iran to establish what Iran did in the past and the suspicions that Iran had, at a certain moment in time, pursued the development of a nuclear weapon. Iran has rejected that but the world wants to know what did you do in the past so we have a guide to what you may know in the future.”

“Just by listening to the presidents today – obviously they have to emphasise certain aspects of the deal for their populations. There could be some conflicts in the future but this deal is so detailed – to use the phrase one Iranian analyst said that it’s air-tight, water-tight and bullet-proof – that they have worked on all the details that if a problem arises they have something in the deal and with the IAEA in order to deal with it.”

Apparently in her rush to get out her enthusiastic message of this JCPOA agreement as the panacea for Middle East ills, Doucet forgot that she had used the same quote from an “Iranian analyst” in an article published nearly two weeks earlier and that the phrase was used not to describe the terms of the actual final agreement but in relation to his opinion of what it should be.

“”The deal must be air tight, water tight and bullet proof,” says Ali Vaez, a senior Iran analyst at the International Crisis Group who has followed the process from the start.” (BBC News website, 2/7/2015)

Obviously listeners did not get to hear “the detail” of the JCPOA agreement as they were promised in the introduction to this item. Doucet’s superficial and uncritical report failed to give a comprehensive and accurate summary of the deal and overlooked some of its important features and implications whilst clearly herding BBC audiences towards a very specific view of the topic which does little to enhance their “understanding of international issues“.