Yesterday, we posted about a Nov. 4th Times of London review by David Aaronovitch of a new exhibit at the Jewish Museum in London titled Blood: Uniting and Dividing.

We paid particular attention to this passage in Aaronovitch’s review.

To its credit the exhibition also reminds visitors that in the 1990s the Israeli blood donation services took blood from Ethiopian immigrants, then routinely discarded it for no other good reason apparently than the race of the donors

We demonstrated that Aaronovitch misrepresented the reason why, in the 90s, Ethiopian blood was discarded.  The blood wasn’t, as he claimed, discarded for “no other reason than the race of the donors”. Rather, it was based on a failure by the blood services to update an earlier (medically sound) directive from 1984 which related to the fear of spreading Hepatitis B, Tuberculosis and Malaria.

However, though it doesn’t appear as if Aaronovitch researched the issue before reaching his conclusions, we wondered if he was merely communicating what he saw at the Jewish Museum. Did the exhibit portray the Israeli row in the 90s as a case of racism against Ethiopian immigrants?

We subsequently obtained the following email correspondence between the curator of the Jewish Museum and a follower of our blog, which helps to answer this question. 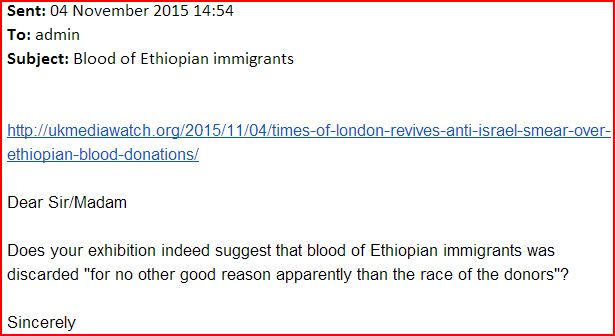 So, it seems like the Times of London journalist’s claim that racism explains the decision to discard Ethiopian blood wasn’t based on his own research into the case or the museum exhibit he ostensibly reviewed.

At the very least, Mr. Aaronovitch clearly owes readers an explanation as to how exactly he reached his original erroneous conclusion.