The Mail’s suggestion that Israel was knowingly treating people who hate her is false, and the more serious accusation than Israel was using Sunni jihadists against Iran and its proxies in Syria is likewise unfounded. “Israel didn’t give one shekel or one bullet to al-Nusra members,” as the IDF officer underscored.

Cross posted from the blog of Kyle Orton

Last night The Daily Mail reported, after embedding with Israeli commandos, on Jerusalem’s ongoing effort to treat casualties of Syria’s horrific war. The Mail, however, put a spin on this story that not only reflected badly on the Jewish State, but feeds into a narrative cast by Iran and its allies to the effect that Israel is supporting Salafi militancy in Syria, specifically al-Qaeda, a propaganda campaign that has already had deadly consequences.

First the facts The Mail presents on what Israel has done in southern Syria:

In the three years that Israel has been running these operations, it has saved the lives of more than 2,000 Syrians—at least 80 per cent of whom are male and of fighting age—at a cost of 50 million shekels (£8.7 million).

The Mail then adds:

Almost every night, Israeli troops run secret missions to save the lives of Syrian fighters, all of whom are sworn enemies of the Jewish state. … Israel insists that these treacherous nightly rescues are purely humanitarian, and that it can only hope to ‘win hearts and minds’ in Syria. But analysts suggest the Jewish state has in fact struck a deadly ‘deal with the devil’—offering support to the Sunni militants who fight the Syrian ruler Assad in the hope of containing its arch enemies Hezbollah and Iran. … Many of the casualties rescued by Israel belong to Salafist groups who harbour a deep-seated hatred of the Jewish State. It has also been reported that some may be members of [the Syrian branch of al-Qaeda,] Jabhat al-Nusra … It is unclear how the two enemies arrange the rescue. All that has been disclosed is that word reaches Israeli forces that casualties have been dumped at the border, intelligence establishes that it is not a trap, and the commandos are sent in. … Israel says it either does not gather, or does not disclose, [which faction the fighters she treats are from].

The Mail provides literally no evidence for any of these claims: that “all” Syrians treated by Israel are her “sworn enemies”; that Israel is “support[ing] … Sunni militants” to blunt Iran’s power in Syria; that “many” of the treated casualties “belong to Salafist groups who harbour a deep-seated hatred of the Jewish State”; and especially not for the incendiary accusation that Israel has any relations with Nusra. To the contrary, the actual evidence in The Mail article contradicts many of these wild statements.

For example, The Mail ups the rhetorical ante by saying that “some” of the people Israel treats “openly admit that they intend to kill Israelis.” This could be true, but that is not the evidence presented here. Instead, The Mail finds Syrians in Israeli hospitals who say things like, “Thanks to Israel for letting me in,” and, “The butcher Assad is my enemy. Israel is not my enemy.” One man even testified to changing a negative assessment of the Jewish State because of the treatment offered. The nearest The Mail gets to evidence of any kind for its statement is that while most medical staff are pleased to see this reaction, “Other medical staff … believe that the militants were lying” about being grateful to Israel, and one “Christian Israeli Arab social worker said that many hospital staff resented having to treat them.”

The accusation that “many” of the people Israel treats are “Sunni militants” or “Salafist[s]” is especially unbelievable because those forces are weak in the areas Israel provides treatment. Israel actually does have contacts with the rebellion, namely the sections that have been vetted by the Islamist-averse Central Intelligence Agency, if only for logistics reasons—as Israel does now with Russia for “deconfliction” purposes. The rebels run the area and to move in without coordination opens up all kinds of hazards. The rebels in this zone are part of al-Jabhat al-Janubiya (The Southern Front), an alliance of Free Syrian Army (FSA)-branded nationalist rebels that receive support from the Jordan-based, U.S.-supported Military Operations Centre (MOC).

It has been said that Israel’s relationship with the rebels goes further. In July 2014, Nusra kidnapped Sharif as-Safouri, the commander of the FSA-branded Liwa al-Haramayn al-Shureefayn in Deraa. In a video “confession,” as-Safouri testified that in exchange for his men keeping the border secure—preventing fire on Israel by either the jihadi-Salafist insurgents or the Shi’a jihadists Iran has flooded into Syria to protect the regime—Israel had provided medical supplies, clothes, and weapons, including rifles, ammunition, and rocket-propelled grenade launchers. While subsequent reporting verified that as-Safouri had been Israel’s point of contact in coordinating medical supplies in southern Syria, it was never confirmed that Israel had transferred weapons to Syrian rebels. Assuming Israel had, however, it only makes the point in a different way: Israel has a fairly good picture of the military landscape in southern Syria and is deliberately not doing anything to help hardline insurgent forces.

It has to be said that had Israel treated Nusra fighters in southern Syria, it would not be as simple as saying, “Israel supports al-Qaeda.” First because Israel is providing medical help—quite different from “support”—to everyone in this area, working from medical ethics to treat people according to need not to allegiance. Secondly because Nusra in southern Syria (and in Qalamoun) is a largely tribal construct, as Hussain AbdulHussain has explained. The ideological part of Nusra tied into al-Qaeda “central” is based in Idlib. But everyone knows the insinuation—which is made more directly here by The Mail and some of the analysts it calls on—that Israel is using al-Qaeda against Iran and Assad. And that accusation has already had lethal consequences.

In June, an Israeli ambulance in the Golan Heights was set upon by a Druze mob, the two injured Syrians it was transporting were attacked, and one of them killed. Earlier in the month, Nusra had massacred Druzi inhabitants of Jibal al-Summaq. With the Druze community, spanning the Syria-Israel border, in an understandable state of agitation, Iran took the chance to raise it to fever pitch with a relentless campaign of disinformation among the Druze, some of it through Samir Kuntar, a terrorist of Lebanese Druze extraction who had been imprisoned in Israel for, inter alia, crushing the skull of a four-year-old Israeli girl with the butt of his rifle.

Iran’s message was an intensification of a theme it has been playing for years (‘Israel supports Nusra’), but Iran now added: ‘Nusra just massacred your kinsmen and is planning to do it again—so stop Israel’s support to Nusra and you’ll stop the massacre.’ As well as poisoning the relations between the Israeli State and its loyal Druze citizens, this Active Measure was meant to create domestic pressure on Israel to alter Israeli policy away from a modus vivendi with the rebellion on the border and a determination to keep Iran’s proxies out of southern Syria, and toward an antagonism to rebel advances in the area.

So this is not a low-stakes business, making it doubly disgraceful that The Mail refers to the two Syrians attacked by the mob as “jihadis,” for which there is no evidence**, and says, in a piece of weasel phrasing that makes the accusation without being willing to state it, “It emerged that the militants were suspected members of Jabhat al-Nusra”. This makes The Mail wrong twice: this suspicion didn’t “emerge” afterward but was the cause of the incident, and indeed didn’t “emerge” at all because it was part of an orchestrated strategic messaging campaign. But it is worse than that: The Mail is wholly intellectually dishonest. Having admitted that Israel does not document the allegiance of those it treats, The Mail is allowed to speak to one patient on condition that they do not ask which faction he belongs to, so the entire edifice of insinuation is axiomatically built on pure speculation.

The Assad regime, assisted and increasingly directed by Iran and Russia as they have taken over Syria, has waged an extensive media war to present itself as beset by terrorists supported by the Gulf States, “Zionists,” and the West. The Daily Mail, in reporting as if the Syrian rebels are all Islamist extremists and attributing to Israel a connection with an al-Qaeda affiliate, has regurgitated the propaganda of a hostile dictatorship that only a few years ago was helping Islamist militants to murder British troops.

[*] Update: A report in Haaretz from July 20, 2015, quoted a “senior Israel Defence Forces officer” saying that he believed several Nusra fighters had “infiltrated [Israel] to receive treatment” during the time that Israel was not engaged in thorough background checks of those she was treating. (“We don’t ask who they are, we don’t do any screening … Once the treatment is done, we take them back to the border and they go on their way,” as an Israeli military official told The Wall Street Journalin March 2015.) But that policy had been changed, the identity of all Syrian treated by Israel was now being verified, and Nusrawis were being excluded.

There is some confusion in the Haaretz report about when this change of policy happened: Haaretz says at one point that it changed “a month after” the Druze mob lynched the injured Syrian on June 22, but the officer is directly quoted stating the non-identification policy “ceased a month-and-a-half ago,” which would be before the lynching.

The IDF officer confirmed that an injured Syrian of any affiliation that arrived at Israel’s border would be treated, but unless it could be verified that they were not connected to a terrorist group they would be prevented from coming into Israel.

This does not fundamentally change any of the points made above. The Mail’s suggestion that Israel was knowingly treating people who hate her is false, and the more serious accusation than Israel was using Sunni jihadists against Iran and its proxies in Syria is likewise unfounded. “Israel didn’t give one shekel or one bullet to al-Nusra members,” as the IDF officer underscored. 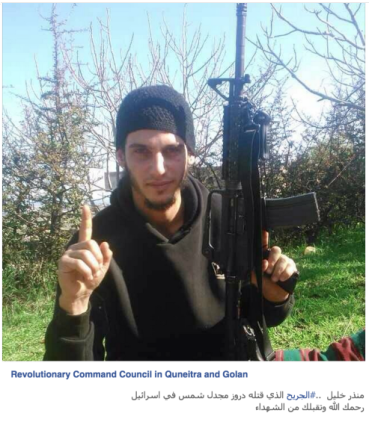 [**] Update 2: The Syrian who was killed by the Druzi crowd was Munther Khalil, who was indeed a rebel fighter, for the Revolutionary Command Council of Quneitra and the Golan, a mainstream FSA-style group.

Update 3: It transpires that a report from May 2015 by Ron Ben-Yishai is relied upon by many who have looked at this issue. Before The Mail’s piece, Ben-Yishai was the only person to have embedded with the Israeli commandos transporting Syrians into Israel for medical treatment. Written for Ynet, perhaps the most popular website in Israel owned by tabloid mogul Yedioth Ahronoth, the key line from Ben-Yishai was: “It is likely that most if not all of these [Syrian] nationals [treated in Israeli hospitals] are rebels from the rival jihadist [groups] Islamic State and al-Nusra Front.” There is simply no reason to believe this, however. Knowing the composition of the insurgents in the border zone, it is one thing to say, as Ben-Yishai does, that the fighters in the area are “mainly Islamists”; quite another to say they’re Nusra (al-Qaeda), let alone IS, which operates in a few tiny pockets in southern Syria, well away from Israel’s border, besieged and attacked by the rebels.