A report today by Will Worley on the latest Palestinian terror attack in Hebron in The Independent (Teenage girl wielding knife shot by Israeli security forces in West Bank, Feb. 14) concluded with context on the recent violence.

There has been an increase in violent attacks on Israelis since October last year. Twenty-seven Israelis have been reported killed in stabbings, shootings and after being rammed by vehicles.

At least 157 Palestinians have been killed by Israeli security forces in the same time.

Worley of course fails to note that most of the 157 Palestinians in question were killed while carrying out or attempting to carry out terror attacks against Israelis – a fact that other reporters writing for The Independent have been careful to note.

Here’s the relevant passage in a Jan. 23rd Indy report by Lizzie Dearden.

Since the start of that month, 27 Israelis have died in stabbings, shootings and car rammings, while at least 155 Palestinians have been killed by security forces, including 95 said to be attempting or carrying out attacks.

Since the unrest started at the beginning of October,  24 Israelis and one US citizen have died in a series of stabbings, car rammings and shootings. At least 148 Palestinians have died, 98 of whom were behind attacks, according to Israel.

In an effort to expedite a correction, we contacted Indy editors and tweeted the Indy journalist thusly: 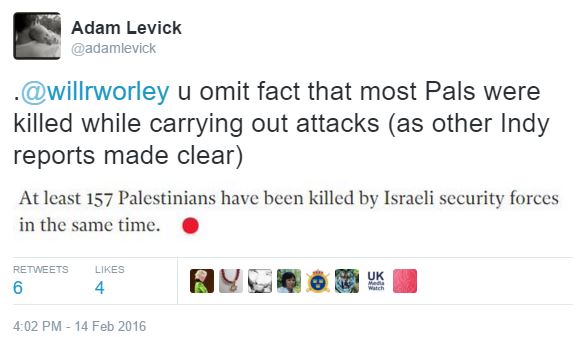 0 replies on “The Independent reports on recent terror attack – one sentence; one glaring omission”