As regular readers will be aware, since the end of the summer 2014 conflict between Israel and terrorist groups in the Gaza Strip, the BBC has consistently under-reported the topic of Hamas’ efforts to rebuild the network of cross-border attack tunnels destroyed during that conflict and has avoided carrying out any serious reporting on the subject of the terrorist organisation’s misappropriation for that purpose of construction materials intended for the rebuilding and repair of civilian dwellings.

On April 18th, however, a story broke that even the BBC could not ignore.

“Security forces discovered a “terror tunnel” inside Israeli territory coming out of the southern Gaza Strip just over a week and a half ago, the Israel Defense Forces revealed on Monday morning.[…]

The tunnel was located approximately 100 feet (30 to 40 meters) below ground and extended “tens of meters into Israel.” It had been fortified with concrete slabs and featured electrical lines and a rail system, IDF spokesperson Lt. Col. Peter Lerner said.”

So did BBC News use this opportunity to bring its audiences worldwide up to speed on the topic of Hamas’ rehabilitation of its attack tunnel network and the related diversion of construction materials and funds away from projects which could improve the welfare of civilians in the Gaza Strip? Were audiences told what the intention behind that tunnel and others is and did the BBC finally get round to sending a journalist to talk to the Israeli civilians living adjacent to the border with the Gaza Strip  who are under threat from such cross-border tunnels?

The bizarre focus of the BBC’s report on the subject was reflected in its interestingly punctuated headline: “Israeli troops uncover ‘new’ tunnel leading from Gaza“. In the body of the article readers were told that: 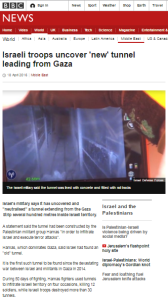 “He [the IDF Spokesman] said the construction was new, lined with concrete, and fitted with an electricity supply, ventilation and rail tracks, but did not have an exit.

However, Hamas claimed that the Israeli military had announced “the finding of an old tunnel in order to gain continued US support for its anti-tunnels project”. […]

The Hamas-affiliated website, al-Majd, reported that the tunnel had been used two years ago.”

After all that, readers were left to make up their own minds on the decidedly unimportant question of whether the tunnel is “old” or “new”.

The far more pertinent subject of Hamas’ long known efforts to rehabilitate the tunnels received minimalist treatment in the article:

“Following the war, the Israeli military said it was developing technology aimed at countering efforts by Hamas to rebuild its tunnel network.”

On the topic of the misappropriation of construction materials the article mentioned a story the BBC ignored at the time, using the “Israel says” formula but avoiding informing audiences on that subject in its own words.

“Earlier this month, Israel suspended deliveries of cement for private projects in Gaza, saying Hamas was diverting the material for its own purposes in violation of a UN-backed agreement following the 2014 war.”

The BBC similarly avoided informing readers on the topic of the cost of the tunnels in its own words:

“”The ugly truth is that Hamas continues to invest millions of dollars to build tunnels of terror and death,” spokesman Lt Col Peter Lerner said.”

With regard to the intended purpose of the tunnel, the article again uses the “Israel says” formula – although the IDF statement paraphrased by the BBC did not of course use the term “militant group” to describe Hamas and the words “against southern Israeli communities” were chopped off the end of the sentence.

“A [IDF] statement said the tunnel had been constructed by the Palestinian militant group Hamas “in order to infiltrate Israel and execute terror attacks”.”

The BBC’s article did not include any comment from the residents of the communities near the border with the Gaza Strip who have for months reported hearing noises they suspected were connected to Hamas’ underground digging.

Additionally, the report once again amplified problematic casualty figures supplied by a compromised UN body and its affiliated political NGOs.

Yet again we see that the BBC is not committed to reporting the story of Hamas’ cross-border attack tunnels in a manner which is conducive to meeting its remit of enhancing audience “awareness and understanding of international issues” and enabling them to understand Israeli counter-terrorism measures.

More enablement of Hamas propaganda from BBC’s ME editor