Turkey’s recent diplomatic moves – including the agreement signed with Israel – were the subject of an article by the BBC’s diplomatic correspondent Jonathan Marcus which appeared in the ‘Features’ section of the BBC News website’s Middle East page on June 29th under the headline “Turkey plays diplomatic chess in Middle East“.

Explaining the former nature of ties between Turkey and Israel and what caused the six-year-long rift, Marcus told readers that:

In fact, in May 2010 the Mavi Marmara was not “Turkish-flagged” but was registered in Comoros and flew that flag of convenience at the time.

Neither was the Mavi Marmara an “aid vessel”: it was a passenger ship (carrying 546 passengers) which formed part of a flotilla of six vessels, only three of which were carrying ‘aid’, as the Palmer report noted (p 47): 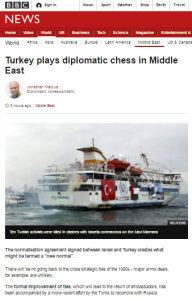 “If the flotilla had been a purely humanitarian mission it is hard to see why so many passengers were embarked and with what purpose. Furthermore, the quality and value of many of the humanitarian goods on board the vessels is questionable. There were large quantities of humanitarian and construction supplies on board the Gazze 1, Eleftheri Mesogeio and Defne-Y. There were some foodstuffs and medical goods on board the Mavi Marmara, although it seems that these were intended for the voyage itself.  Any “humanitarian supplies” were limited to foodstuffs and toys carried in passengers’ personal baggage. The same situation appears to be the case for two other of the vessels: the Sfendoni, and the Challenger I. There was little need to organize a flotilla of six ships to deliver humanitarian assistance if only three were required to carry the available humanitarian supplies. The number of journalists embarked on the ships gives further power to the conclusion that the flotilla’s primary purpose was to generate publicity.”

The BBC has previously corrected or amended reports which included the inaccurate description of the Mavi Marmara as an “aid ship” and clearly this article requires the same treatment.

BBC recognizes that the Mavi Marmara was not an “aid ship”