The summer season is upon us and with it come the annual ‘summer camps’ organised by Hamas and the Palestinian Islamic Jihad in the Gaza Strip. The Tower reports:

“Hamas has opened three-week-long training camps in Gaza for over 50,000 elementary, middle, and high school students, the Gaza-based terror organization said in a press release Sunday.

Hamas official Ismail Radwan explained that the theme of the camps is the “Jerusalem Intifada,” and that the goal is “to raise a generation of Palestinians who love the resistance and the liberation of Palestine and the Al-Aqsa Mosque.” The camps also include scouting and religious educational programming.”

In previous years the BBC has completely ignored these ‘youth camps’ but last year it made a minor exception: BBC audiences got a full fifty-two seconds of coverage of that topic in a programme made by Lyse Doucet. So far this year, the corporation appears to have reverted to form. 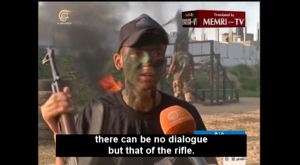 “The declared goal of the camps to is to “prepare a new generation of Palestinian youths spiritually, mentally and physically for the battle to liberate Palestine.” When Hamas talks about the “liberation of Palestine,” it is not referring to the West Bank and Gaza Strip only, but to the whole of Israel. In other words, these Palestinian children are being educated and trained to prepare for joining the war aimed at destroying Israel.

The children are being taught that their role models are Hamas suicide bombers and terrorists responsible for the death of hundreds of Israelis over the past few decades. […]

Hamas’s religious education is aimed at teaching the children about Islam and its sharia laws. The children are being told that the whole of the land of Palestine (including Israel) is Muslim-owned land that can’t be given away to non-Muslims. They are also being taught that making peace with the “infidels” is prohibited under the teachings of Islam.”

The BBC is of course notoriously reluctant to provide its audiences with information on the issues of Palestinian incitement and glorification of terrorism and its portrayal of what it likes to term ‘obstacles to peace’ is hence perennially one-sided. It therefore comes as no surprise to see the corporation once again ignore the mass indoctrination of children with terror lauding ideology – even as it continues to promote a politicised narrative on the ‘reasons’ for the failure to resolve the Palestinian-Israeli conflict.

BBC silent on British link to incitement of Palestinian children