The BBC News website’s coverage of the pretentiously titled “Conference pour la Paix au Proche-Orient” which was held in Paris on January 15th included two items produced before the event took place and one report published after it concluded.

Several noteworthy themes were apparent in those reports.

a) In the synopsis to the second (filmed) report, audiences were told that:

“The two sides have not spoken directly since the last round of peace talks broke down in 2014.”

The report itself stated:

“The last round [of talks] collapsed in April 2014 and they haven’t met since then”.

In the third report, audiences were told that:

“The last round of direct peace talks collapsed amid acrimony in April 2014.”

BBC audiences have seen that mantra of equivalence promoted on numerous occasions in the past and the BBC’s framing of the story at the time did not provide audiences with the full range of information and background necessary for full understanding of the reasons for the breakdown of that round of talks. Thus we see that almost three years on, the BBC continues to promote a version of events which conceals from audience view the fact that the Palestinian Authority made three important choices between March 17th and April 23rd 2014 (not to accept the American framework, to join international agencies in breach of existing commitments and to opt for reconciliation with Hamas) which had a crucial effect on the fate of those negotiations.

b) The reports continued the long-standing practice of careless wording which leads BBC audiences to mistakenly believe that Israel is constructing new communities rather than – as is actually the case – building homes in existing towns and villages, most of which would under any reasonable scenario remain under Israeli control in the event of an agreement.

In the second report, viewers were told that before talks can resume:

And that the chances of renewed talks are “slim” because:

“The meeting also comes at a time of tension between Israel and the international community after the UN passed a resolution last month denouncing Israel’s settlement activity on occupied land. […]

Palestinians fiercely object to Israeli settlement activity in the occupied West Bank and East Jerusalem, territory it wants for a future state.”

Obviously the use of such inaccurate language does not enhance audience understanding of the subject and none of the reports mentioned the 2009 freeze of construction in communities in Judea & Samaria and the fact that the Palestinians refused to negotiate during most of that ten-month freeze. Likewise, all three reports refrained from informing audiences of the fact that the existing agreements between Israel and the Palestinians – the Oslo Accords – place no limitations whatsoever on construction in Area C or Jerusalem.

c) As ever, audiences were provided with a partial portrayal of ‘international law’ in all these reports. None of the reports provided any relevant historical background on the subject of the 1948 Jordanian occupation of Judea & Samaria and parts of Jerusalem or the 1967 Jordanian attack which subsequently left Israel in control of those areas.

“Over 600,000 Israelis live in these areas which were captured in the 1967 Middle East war. They are seen as illegal under international law, but Israel disagrees.”

In report two viewers were told that:

“The settlements are considered illegal under international law, though Israel disputes this.”

The third report informed readers that:

“The settlements, home to about 600,000 Israelis, are considered illegal under international law, though Israel disputes this.”

d) Contrasting with the promotion of the well-worn BBC theme of ‘settlements as an obstacle to peace’, the presentation of issues on the other side of the divide was minimal and qualified, using the ‘Israel says’ formula. In the first report readers found the following:

“They [Israeli officials] argue that the very Palestinian leaders with whom they are supposed to be seeking peace have incited an upsurge in attacks, mostly stabbings, since October 2015.”

That, however, was ‘balanced’ with a statement straight out of the PLO’s media guidance:

“Palestinian leaders blame the violence on a younger generation’s anger at the failure of talks to end Israel’s occupation and deliver on promises of an independent state.”

In report two, viewers were told that:

“Israel does not want pre-conditions [to talks]. It says Palestinian violence and incitement is the big problem”.

Only in report three did BBC audiences find a brief reference to the very relevant issue of the PA’s refusal to recognise Israel as the Jewish state.

“Israel says Palestinian incitement and violence, and a refusal to accept Israel as a Jewish state, are key obstacles to peace.”

e) All three reports included portrayals of Jerusalem which failed to mention that it is one of the issues to be resolved in final status negotiations under the terms of the Oslo Accords. 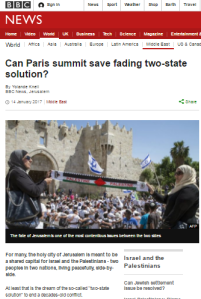 In the first report, Yolande Knell told readers that:

“For many, the holy city of Jerusalem is meant to be a shared capital for Israel and the Palestinians – two peoples in two nations, living peacefully, side-by-side.

At least that is the dream of the so-called “two-state solution” to end a decades-old conflict.”

In the second report viewers were told that:

“They also disagree over Jerusalem. Israel says the city is its capital, but Palestinians want their own capital in the east”.

“The status of Jerusalem is one of the most sensitive and complex issues of the entire conflict. The Palestinians view East Jerusalem as the capital of their future state but Israel proclaim the entire city as its capital.”

f) The first and third reports included generous amplification of Palestinian statements concerning the proposed relocation of the US embassy to Jerusalem – once again without any clarification as to why there should be objection to the transfer of a foreign embassy to a location to which the BBC repeatedly tells its audiences the PA does not lay claim.

Report one told readers that:

“The timing of the talks in Paris – just days before Donald Trump moves into the White House – appear very deliberate.

He has not yet spelt out his vision for the Middle East but has shown strong backing for the Israeli far-right.

He has nominated a lawyer, David Friedman, who is an outspoken critic of the two-state solution and supporter of settlements, to be his ambassador to Israel.

Mr Trump has also promised to move the US embassy to Jerusalem.

Like other countries, the US currently keeps its embassy in Tel Aviv, as it does not recognise Israeli sovereignty over Jerusalem.

“This is very dangerous what President-elect Trump wants to do,” Palestinian official, Mohammed Shtayyeh tells me. “It is American recognition that Jerusalem is part of the State of Israel.”

“We would consider this American move as an end to the peace process, an end to the two states and really putting the whole region into chaos.””

In report three readers were told:

“But they [the conference delegates] shied away from criticising President-elect Donald Trump’s suggested US embassy move to Jerusalem. […]

The conference comes at a time of rising tension in the region, and there are fears President-elect Trump’s plans to move the US embassy from Tel Aviv to Jerusalem could stoke it further.

There was deep alarm among participants at the conference that if President Trump does break with decades of US policy and move the embassy to Jerusalem, then conditions will be set for another upsurge in violence in the region, says the BBC’s Hugh Schofield in Paris. […]

French Foreign Minister Jean-Marc Ayrault told France 3 TV on Sunday he thought Mr Trump would not be able to make the move, but if he did, it would have “extremely serious consequences”.

On Saturday, Palestinian leader Mahmoud Abbas warned such a move could “bury the hopes for a two-state solution”.”

“The Palestinians want international involvement, but Israel says a settlement cannot be imposed. And Israel has the backing of Donald Trump”.

Once again the BBC failed to provide its audiences with the full range of information necessary for proper understanding of the background to this story – and not least the decidedly relevant fact that various Palestinian factions, including Hamas, completely reject the concept of the two-state solution – while promoting some of its regular framing of the topic.