Radio 4's Hugh Sykes contributes to the BBC's 'it's all because of the occupation' messaging.

The first of those reports was broadcast on the “World at One’ programme (from 14:30 here). Presenter Mark Mardell gave an introduction devoid of any context concerning the reasons for the outbreak of the Six Day War. 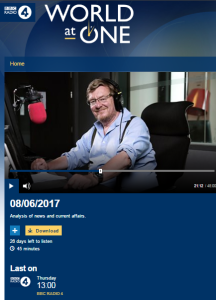 Mardell: “Now it’s…in Israel it’s 50 years since two major events which changed the history of the region. On the 5th of June 1967 a war began between Israel and Syria, Jordan and Egypt. Six days later Israel emerged victorious. At the end of that war a half a century ago, Israel’s occupation and settlement of Gaza and the Palestinian West Bank began.”

The 19 year-long Jordanian occupation of what Mardell terms “the Palestinian West Bank” is clearly not deemed relevant to the story. Mardell continues:

“The Gaza settlers were evacuated in 2005. Those in the West Bank – more than half a million now – are still there. Our correspondent Hugh Sykes is in Jerusalem for the World at One.”

After a recording of music playing, Hugh Sykes begins his item. Curiously (but, given BBC editorial policy, predictably) Sykes’ descriptions of the second Intifada do not include any mention of the word ‘terror’. [all emphasis in italics in the original]

Sykes: “A saxophone player on Jaffa Street [sic – Jaffa Road]. People sitting at café tables under parasols on a sunny spring day here in Jerusalem. The first time I walked here 15 years ago the shops had security guards with automatic rifles checking your bags. There was a wave of almost routine suicide bombings, many of them killing dozens of people on buses here in Jerusalem. Between 1989 and 2008 across Israel altogether 800 people were killed by Palestinian suicide bombers.”

Sykes’ information – apparently gleaned from Wikipedia – of course does not tell the whole story. In just five of the 19 years cited by Sykes – 2000 to 2005 – 1,100 Israelis were murdered in terror attacks that included – but were not limited to – the suicide bombings on which he has chosen to focus. He continues:

“Since then the security barrier – the walls and the fences and the extensive checkpoints –have been put up, cutting off the West Bank; the main source of the suicide bombings. Though the counter argument is that the bombings have stopped because the Palestinians have largely stopped trying to send suicide bombers here, partly because it led to the security barrier being put up and their lives being made much more difficult. So, it’s calm here now. But this is an illusion Daniel Seidemann tells me. He’s an Israeli lawyer specialising in the geo-politics of Jerusalem.”

Of course BBC regular Daniel Seidemann is not just a “lawyer”: he is also the founder of two politicised campaigning groups – ‘Ir Amim’ and ‘Terrestrial Jerusalem’ – both of which receive foreign funding including, in the case of the latter, from the UK tax payers listening to this programme. Despite the existence of BBC editorial guidelines stating that the “particular viewpoint” of contributors should be made clear in advance to audiences, Hugh Sykes makes no effort to clarify Seidemann’s political agenda and links to politicised campaigning NGOs to listeners before they go on to hear that contributor’s cliché-ridden statements.

Seidemann: “I consider the greatest threat to the Jewish people in this generation to be perpetual occupation and Israelis are in a state of clinical denial.”

Sykes: “Why is occupation a threat to Israel?”

Seidemann: “We are sipping cappuccino on the edge of a volcano. Go to my friends in Tel Aviv and ask them about occupation. They’ll say ‘occupation – what occupation?’ We live in a bubble and bubbles burst. Israel has no future if we continue to occupy. It may take 50 years, it may take a hundred years.”

Sykes: “What’s the mechanism that brings Israel to an end if you don’t disengage from occupation?”

Seidemann: “Both Israelis and Palestinians are deeply traumatised people and we’re living something on an emotional overdraft. I am not telling you what will happen tomorrow morning. Look out the window, OK? In that city there are 850,000 people. 37% of them are Palestinians. This is a bi-national city and in this bi-national city one national collective has all the power and the other is politically disempowered.”

Of course even those Arab residents of Jerusalem who chose not to exercise their right to apply for Israeli citizenship (and hence the right to vote in legislative elections) are entitled to both run and vote in municipal elections in the city. Hugh Sykes however does not bother to clarify those facts relating to people who have just been inaccurately described as “politically disempowered” before continuing:

Sykes: “And more than half a million settlers now live in the West Bank. If there’s ever going to be any progress towards agreeing two nations here, a plan that’s often been discussed is land swaps, allowing more than 400,000 Jewish settlers to remain in what are now substantial high-density suburbs of Jerusalem. But this would leave 156,000 settlers in settlements which would have to be evacuated, as all the settlements in Gaza were 12 years ago but that was just 8,000 people.”

Seidemann: “It can be done. If Israel has the will and the capability to relocate 156,000 settlers, the two-state solution is alive. If we don’t – it’s dead. Israel needs and deserves recognition in order to assume our rightful place among the family of nations. And that will happen when a Palestinian embassy opens down the street here in West Jerusalem and an Israeli embassy opens in East Jerusalem. That provides as much security as another brigade of tanks.”

Obviously any serious examination of this topic would at this point go on to address the issue of what happened after those 8,000 Israelis were uprooted from their homes and livelihoods in the Gaza Strip (along with residents of four communities in northern Shomron which Sykes and his guest appear to have forgotten) twelve years ago. Such a discussion would have to address the fact that the move did not advance peace and in fact the number of terrorist missile attacks on Israeli civilians increased. It would also have to address the fact that international bodies and nations which lauded the Gaza disengagement, promising understanding should Israel subsequently have to act against terrorism in Gaza, quickly swapped that pledge with condemnation.

Sykes, however, chooses to ignore those inconvenient facts, opting instead to reinforce his messaging.

Sykes: “Daniel Seidemann. And the recent retired director of the Mossad – Israel’s equivalent of MI6 and the CIA – Tamir Pardo, said last month that the occupation and conflict with the Palestinians was – as he put it – Israel’s one existential threat; a ticking time-bomb. But there are non-negotiable absolutists on both sides here. Palestine is Palestine from the River Jordan to the sea. And this is Jewish land: God gave it to us.”

Remarkably, only the Jewish “absolutists” in Sykes’ portrayal are religiously motivated.

Sykes: “Does the compromise include having Jerusalem as the capital of Palestine and of Israel?”

Asa-El: “I can envisage splitting it, which I’m told is simpler to do than to share.”

Nevertheless, at the end of the item Sykes inaccurately sums up that response as follows:

Sykes: “Amotz Asa-El raising the possibility that Jerusalem could be the shared capital of Israel and of a new state of Palestine.”

Obviously this report is yet another contribution to the campaign of opportunistic politicised messaging already seen on the BBC News website. It too advances a narrative according to which the modern-day conflict is exclusively rooted in the outcome of the inadequately explained Six Day War – in particular the ‘occupation’ and ‘settlements’ – while erasing from audience view the underlying and far older refusal of Arab states and Palestinian leaders to accept and recognise the existence of the Jewish state.

Sykes’ second report of the day will be discussed in a future post.