How many of the BBC's recent reports on events relating to Temple Mount adequately explained the 'status quo' there?

For anyone trying to understand the events ostensibly related to new security measures at entrances to Temple Mount in the latter half of July, familiarity with the history and terms of the ‘status quo’ operating at that site is obviously of prime importance. Without that information, it is impossible to make sense of Palestinian and Israeli claims or to reach informed conclusions about the story.

The history of that ‘status quo’ of course began in June 1967 when Jordan’s 19-year occupation of parts of Jerusalem ended after it lost the war it had launched together with Egypt and Syria. 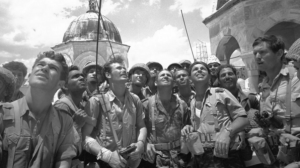 “Within hours of Israel’s victory in Six-Day War and the unification of Jerusalem, the Minister of Defense at the time, Moshe Dayan, arrived on the Temple Mount and began to formulate the arrangements that would eventually be labeled “the status quo on the Temple Mount.” Dayan ordered the Israeli flag that had been raised at the site to be lowered and Israeli forces on the Temple Mount to be withdrawn to a position in the northern sector of the compound. […]

The new order that Dayan formulated on the Temple Mount was crystallized on the basis of Dayan’s belief that this was the correct formula of action to prevent the national-territorial conflict from spilling over into a religious one, since a religious war would be much more dangerous.

The historical status quo on the Temple Mount included the following key components:

While some of those components have changed over time (for example, visiting hours for non-Muslims have been reduced and Muslim prayer areas have been expanded), the basic division of responsibility between Israel and the Waqf remains unchanged – as summed up concisely by the Times of Israel (which also has some good background on the history of the Waqf here):

“The Temple Mount is the holiest site in Judaism and is revered as the site of the biblical temples. It is also the third-holiest site in Islam, after Mecca and Medina, and is known to Muslims as the Haram al-Sharif. Under an arrangement in place since Israel emerged victorious in the Six Day War in 1967, non-Muslims are allowed access to the site but are forbidden to pray there. Under this status quo, Israel is responsible for security at the site while the Jordanian trust — the Waqf — is in charge of administrative duties.”

So how well was that crucial background communicated to BBC News website audiences during the last two weeks of July? In all, eighteen reports (16 written and two filmed) relating to stories connected to the tensions surrounding security measures installed after the terror attack on July 14th were published on the website in the fifteen days between that date and July 28th.

Only just over half (55.5%) of those reports included any sort of mention of the issue of the ‘status quo’.

Four reports cited the ‘status quo’ – or “arrangements” – without bothering to explain it.

“In the wake of the killing of the police last Friday, Israel installed metal detectors at entrances to the holy site. The move, however, drew an angry reaction from Palestinian and Islamic leaders who say it is a violation of the status quo. […]

Israel has repeatedly pledged to maintain the status quo – a delicate set of arrangements in place at the site for the past 50 years. Any changes there are often regarded by Palestinians, who claim East Jerusalem as the capital of a sought-after state, as a violation of these arrangements.”

“But Palestinians strongly object to the installation of metal detectors. They see it as a move by Israel to assert more control over the sacred site and as a violation of longstanding access arrangements. […]

Meanwhile, the Muslim authorities overseeing the Al-Aqsa mosque say they reject any change to the status quo.

Israel insists the measure does not alter the delicate set of arrangements governing the site for the past 50 years.”

“But Palestinians strongly object to the installation of metal detectors. They see it as a move by Israel to assert more control over the sacred site and as a violation of longstanding access arrangements.”

“Jordan, which occupied East Jerusalem from 1949 [sic] to 1967, is the custodian of the site, which is known to Muslims as Haram al-Sharif and Jews as the Temple Mount.”

Israel and Jordan in diplomatic standoff after embassy deaths 24/7/17:

“The incident comes at a time of heightened tension in the region over a Jerusalem holy site, where Jordan has an historical role as custodian. […]

Jordan, which occupied East Jerusalem from 1949 [sic] to 1967, funds the upkeep of the site, which is known to Muslims as Haram al-Sharif and Jews as the Temple Mount, and runs the Waqf, the religious trust which administers the compound.”

“There were also protests against the security set-up in Jordan, which occupied East Jerusalem from 1949 [sic] to 1967, funds the compound’s upkeep and runs the Waqf, the religious trust which administers it.”

Only three (16.6%) of the total of eighteen reports actually made an effort to clarify the division of responsibility at the site.

“The site is administered by an Islamic authority (Waqf), though Israel is in charge of security there.”

“For Palestinians, their [metal detectors] installation symbolised what they saw as an attempt by Israel to assert further control over the site of their holy shrine in occupied East Jerusalem – the mosque that also acts as a powerful symbol of their national aspiration. […]

The site is hugely politically sensitive and has been subject to a delicate set of arrangements – commonly referred to as the “status quo” – governing access, security and administration, for the past 50 years.

Under the arrangement, Israel is responsible for security and a Jordanian-funded religious trust, or Waqf, looks after the day-to-day running of the site.

Palestinians said the placing of the metal detectors upset the status quo, which Israel has repeatedly pledged to maintain. Israel said Palestinians were using the issue as a pretext to spread hostility against the Jewish state.”

In other words, visitors to the BBC News website would have to have been lucky enough to stumble across one of three reports published on two separate days over a fifteen day period in order to get some inkling of what this story is really all about.

0 replies on “Did the BBC adequately explain the Temple Mount ‘status quo’?”