Though most articles which refer to the 2006 Gaza beach incident now refer to the cause as 'disputed', an article in The Independent written by Bethan McKernan published on August 1st reported that the girl, now 23, has graduated college, and provided background on the incident which takes practically as a given that Israel was to blame.

On June 9, 2006, amidst ongoing rocket attacks against Israel and IDF responses, eight Palestinian civilians (including 3 children) were killed by an explosion on a Gaza beach in disputed circumstances. Though there was no footage of the attack, a widely aired and truly heartbreaking video showing a young girl screaming in grief by her dead father was enough to convict Israel in eyes of many observers.

Palestinians immediately labeled it a “massacre”, a narrative of Israeli culpability accepted without scrutiny by many major media outlets and NGOs. The following photo of the young Palestinian girl, Huda Ali Ghalia, became iconic:

However, an IDF investigation concluded a week later that “that the incident did not result from fire by IDF forces that day.”  Their findings were based on an inconsistency between the shrapnel found in the one of the wounded babies and the metal used in IDF artillery, the absence of a crater at the explosion site and the fact that the IDF had stopped firing 15 minutes before the incident.

Though most current articles which refer to the 2006 incident note that the cause as ‘disputed’, an Aug. 1st article in The Independent, reporting that the girl has now graduated college, provided background on the explosion which takes as a given that Israel was to blame. 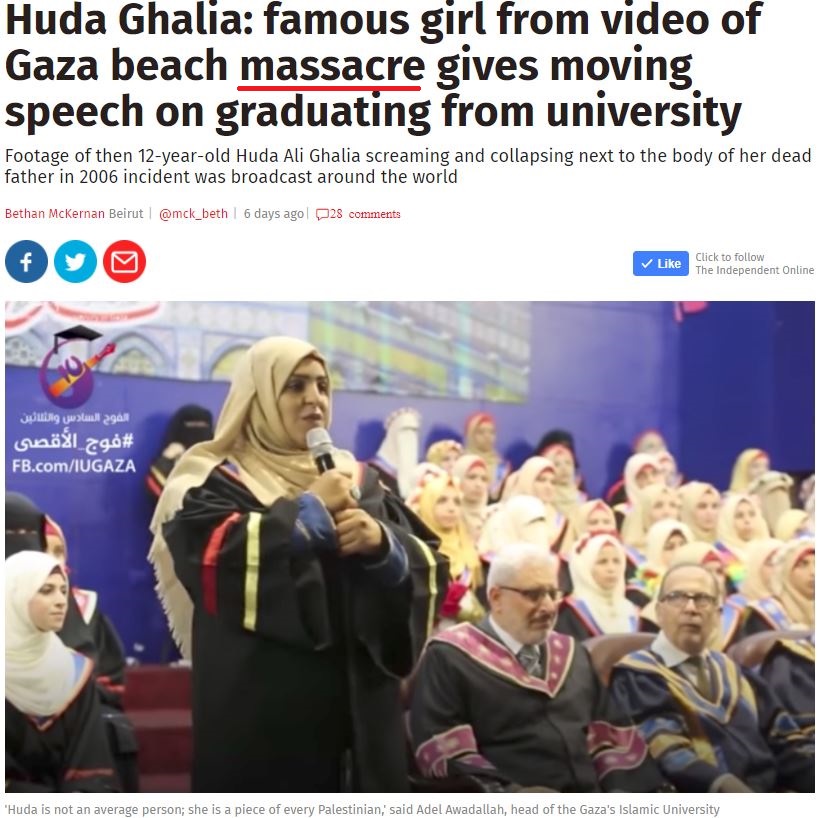 As you can see from the opening paragraph, the article, written by Bethan McKernan, suggests that there is no doubt over Israel’s guilt:

Huda Ali Ghalia was just 12 years old when her family was enjoying a day out at Sudaniya beach in northern Gaza in June 2006. What happened next was witnessed by the world: Israeli shells hit the beach killing several people, including her father, stepmother and five of her siblings. In the aftermath of the explosion a video showed a screaming Huda collapsing next to the body of her father, calling his name. The clip instantly became a symbol of the Palestinian struggle.

However, as we’ve noted, the world certainly did not witness “Israeli shells” hitting the beach and killing several people, as there were no such videos or photos of the blast.

The Indy doesn’t acknowledge the many discrepancies in the Palestinian account, and it isn’t until the penultimate paragraph that Israel’s claims of innocence are (perfunctorily) noted – and even this paragraph includes an erroneous claim:

While the Israeli military initially said it was responsible for the bombing, which killed eight civilians and wounded more than 30 during the 2006 summer war between Israel and Hamas, a subsequent Israel Defence Force (IDF) investigation found that the explosion had been caused by a Palestinian landmine.

However, Ehud Olmert, Israel’s prime minister at the time, did not take responsibility for the bombing. Rather, during a cabinet meeting two days after the incident, he merely expressed Israeli “regret” for the civilian deaths while awaiting the results of the investigation.  Army Chief Dan Halutz clarified the point, noting that ‘voicing regret does not imply we are claiming responsibility’.

We’ve contacted Indy editors requesting a correction to the false and misleading claims in McKernan’s article.