BBC News reported that an MK had given up his seat before that was the case.

As has been recorded here in the past, the BBC has something of a penchant for the ‘dark Israel’ genre and regularly promotes stories which – often with insufficient attention to accuracy – paint a caricature of a country parting ways with democracy that is rife with racism, sexism, xenophobia, homophobia, government censorship and suchlike. 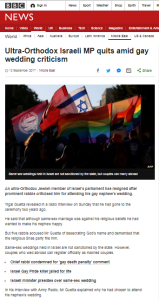 On September 13th a domestic Israeli story which is of little or no interest to foreign readers – but, crucially, belongs to that genre – appeared on the BBC News website under the headline “Ultra-Orthodox Israeli MP quits amid gay wedding criticism“.

Readers were told that Shas party MK Yigal Guetta had resigned from his post.

“An ultra-Orthodox Jewish member of Israel’s parliament has resigned after prominent rabbis criticised him for attending his gay nephew’s wedding. […]

Mr Guetta did not issue a statement after giving up his seat in the Knesset.”

However the story is not quite as cut and dried as BBC audiences were led to believe – as the Times of Israel reported.

“On Wednesday, Guetta wrote to party boss and Interior Minister Aryeh Deri that he would resign and give up his Knesset seat. […]

While Guetta sent a resignation letter to Deri, he did not send one to Knesset Speaker Yuli Edelstein, who must receive a formal resignation announcement from an MK in order for it to become official.

By law, Shas can kick Guetta — the party’s secretary-general — out of the party, but it cannot kick him out of the Knesset.

Once a Knesset member is elected, only a large majority of fellow lawmakers, backed by an Ethics Committee decision and a very serious breach of the law on his or her part, can force him or her from parliament.”

In fact, MK Guetta was only due to meet with the Deputy Knesset Speaker on the day after the BBC published its report.

“Mr. Guetta is now in negotiations with the Shas Party’s council of sages who are said to be less upset about his attendance at the wedding than his disclosure of that information in the radio interview.

A compromise appears to be emerging in which Mr. Guetta would apologize for giving the interview, though not for attending the wedding, and would retain his place in the party and his seat in the Knesset, Israel’s parliament.

To formally resign he would have to write to the Knesset chairman, a step he has not taken yet.”

Israel is of course far from the only country in which some religious figures take a conservative attitude towards gay marriage but in its apparent rush to publish yet another story promoting the ‘benighted’, ‘backward’ Israel theme, the BBC failed to check the accuracy of its claim that Mr Guetta had already ‘given up his seat’.