In June 2016 Jo Cox, MP for Batley and Spen, was brutally murdered by a far-right extremist. In 2015 Jo made her maiden speech to the House of Commons in which she said that while travelling around her constituency of Batley and Spen she found that despite all the different religions “we have far more in common than that which divides us”.

I noticed a news story by Shamoon Hafez in September 2017’s edition of The Cricketer magazine headlined “Yorkshire club forced to call off Israel match.” Cricket is the UK’s main summer sport.

Hafez wrote that Mount CC’s two senior teams in the Huddersfield Central League have all Muslim players and he described how Mount CC played a match in Rome in 2015 against the Catholic Vatican Club St Peter’s CC and then hosted a return match at Yorkshire’s Headingley ground last September. Both matches were covered by the BBC TV, radio and online.

Jo Cox was, Hafez wrote, patron to Mount Cricket Club which was her local club and that she was murdered not far from its ground.

In July this year, Hafez continues, representatives of Mount CC undertook “a ‘fact-finding’ mission to Israel and the Palestinian territories” with a view to arranging a friendly match against a team from the Israel Cricket Association later in the year. While in Israel they visited Al-Aqsa Mosque.

They returned to England and to a “a vicious social-media campaign” and a visit by Friends of Al Aqsa. (Here is Friends of Al Aqsa’s Ismail Patel showing his support for banned terrorist group Hamas and condemning “Jewish government what it is doing to the Palestinian people.”)

It seems the Muslim Public Affairs Committee ran their own hate campaign against Mount CC also (see photo above). It was MPAC’s Asghar Bukhari who once claimed ‘Zionists crept into my home and stole my shoe.’ Bukhari has called me a “filthy scumbag…because you think Muslim lives are less important than other peoples’ lives”.

Hafez writes that Muslim businessman pulled their support for Mount CC and rumours were circulated that Mount CC were only visiting Israel for financial gain as “the ICA were willing to help fund a new clubhouse at Mount’s ground.”

The photo circulated of Hanif Mayet, the club’s founder in 1976 and current Chairman, “posing outside the Peres Peace Centre in Tel Aviv fuelled more discontent” according to Hafez.

On August 8th a club statement announced the tour had been cancelled. The statement read (See Fig. 1 below):

“I would like to reassure everyone that we will always welcome and accommodate the feelings of our community, particularly in relation to the plight of our brothers and sisters in Palestine and take their concerns very seriously.”

In the statement Mount CC denied that there would have been any financial gain involved in the tour to Israel.

Hafez reports that a senior Mount CC club official said “What really upsets me is that no one spoke up for us. We were left to the slaughter.”

The reason I find this case so curious is that, apart from The Cricketer, I cannot find this story in any mainstream media be it British, British Jewish or Israeli. And no high-profile cricketer has stood up for Mount CC either.

But the story has taken further twists. According to Mount CC’s Twitter the club is now looking for donations to run two cricket training sessions for Palestinians in the West Bank and Jerusalem with the proviso that the Palestinians are:

“MUSLIM CHILDREN ONLY” (see Fig. 2 below)

And, finally, the cricket club burnt down at the end of last month due to a massive fire. (see Figs. 3, 4, 5 below)

Despite all this there seems to be no interest at all from the mainstream media, the cricketing authorities or any players.

Why? Am I missing something?

Credit to Shamoon Hafez and The Cricketer, though, for bringing the whole sad story to light. 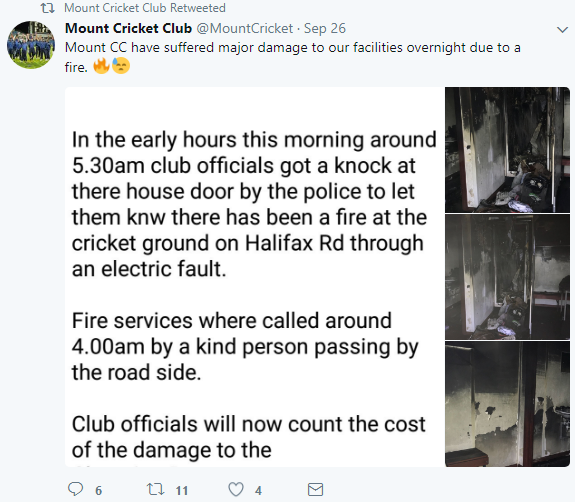 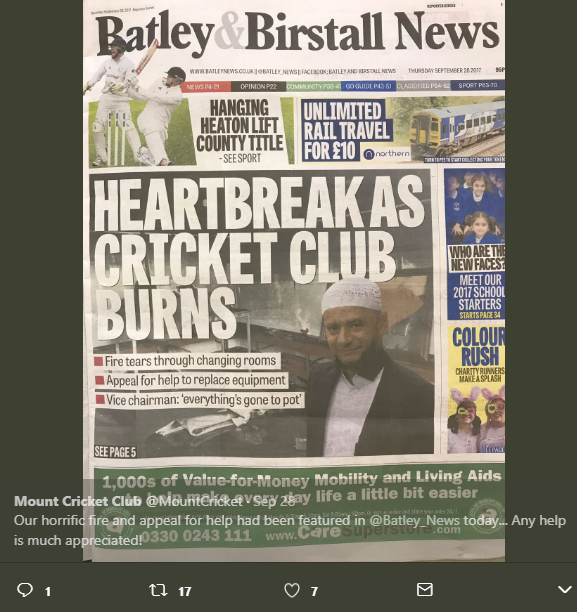 Like Loading...
Tags from the story
Category not assigned, Cricket, Hanif Mayet, Israel, Israel Cricket Association, Mount Cricket Club, Palestinians, Shamoon Hafez, The Cricketer
Written By
Guest/Cross Post
More from Guest/Cross Post
This is a cross-post by Mark Gardner at the blog of The...
Read More

0 replies on “The Curious Case of Mount CC’s Cancelled Cricket Tour to Israel.”