A Yolande Knell article from July 2016 was recycled by the BBC News website.

Those visiting the BBC News website’s Middle East page over the last few days may have noticed that an article by Yolande Knell first published in July 2016 has on two separate occasions been recycled as ‘related reading’.

On November 18th and 19th the article was promoted under its original title. 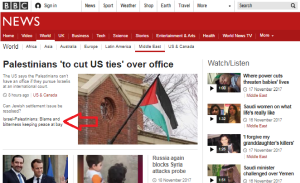 On November 19th and 20th it was promoted using the authoritative sounding heading “The issues preventing peace”. 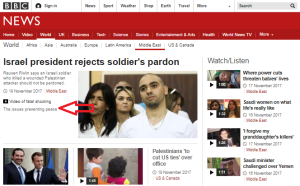 So what exactly are “the issues” that is the BBC telling its audiences are “preventing peace”?

Readers may recall that Knell’s article related to a June 2016 report put out by the Middle East Quartet which the BBC described at the time as “saying that hopes for peace between Israel and the Palestinians were being severely undermined by three “negative trends”. 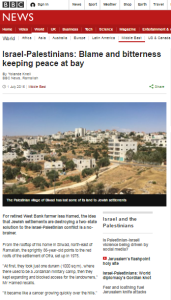 “Nickolay Mladenov told the UN Security Council that they were continuing violence, terrorism and incitement; Israeli settlement expansion in the West Bank; and a lack of control of the Gaza Strip by the Palestinian Authority.”

However, Knell’s nine hundred and sixteen-word report devoted a mere eighty-two words to discussion of the first and third issues highlighted by the Quartet, with the rest of her article focusing audience attentions on the topic of Israeli communities that were described in her opening paragraphs as being “like a cancer”.

“For retired West Bank farmer Issa Hamed, the idea that Jewish settlements are destroying a two-state solution to the Israel-Palestinian conflict is a no-brainer.

From the rooftop of his home in Silwad, north-east of Ramallah, the sprightly 86-year-old points to the red roofs of the settlement of Ofra, set up in 1975.

“At first, they took just one dunam (1000 sq m), where there used to be a Jordanian military camp, then they kept expanding and blocked access for the landowners,” Mr Hamed recalls.

“It became like a cancer growing quickly over the hills.”” [emphasis added]

The inaccuracies, omissions and bias – including amplification of the anti-peace BDS campaign – in Knell’s report were previously discussed on these pages at the time.

Once again, the steering of BBC audiences towards a politically partisan view of what – and who – is “destroying a two-state solution to the Israel-Palestinian conflict” and thus “preventing peace” is on display.