It's not just that the Guardian gives the erroneous impression that the movement is larger and more influential than it really is.  Their contributors, journalists and editors also continually downplay the true goals of BDS, misleadingly casting their leaders as 'progressives' who merely seek to end the occupation.

BDS is a movement with negligible support, made up of a relatively small number of radical, far-left Western activists who share a malign obsession towards the one and only Jewish state.

Though the actual ‘achievements’ of BDS are few, in the UK, their message is amplified and legitimised by friendly media outlets such as the Guardian, who rush to publish reports of every claimed BDS ‘success’ while failing to report the far more numerous instances of BDS fails. 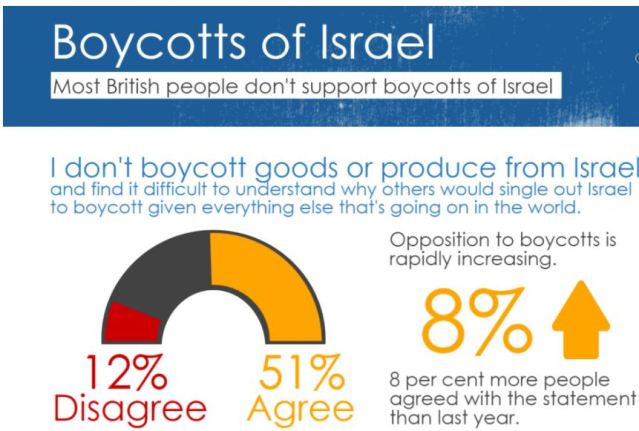 It’s not just that the Guardian gives the erroneous impression that the movement is larger and more influential than it really is.  Their contributors, journalists and editors also continually downplay the true goals of BDS, misleadingly casting their leaders as ‘progressives’ who merely seek to end the occupation.

Eno, Waters and Loach are among a group of artists who have joined the Boycott, Divestment and Sanctions movement, a global campaign that aims to increase pressure on Israel to end its occupation of Palestinian territories, and lobbies artists, academics and businesses to refrain from engaging with or touring in Israel.

In fact, BDS leader Omar Barghouti has been clear on two points:

Far from being ‘pro-peace’, he openly supports ‘armed Palestinian resistance’ against Israelis, and calls for the end of the Jewish state within any borders.

The Guardian also initially included, in the online and print editions of the article, the erroneous claim that the popular rock band U2 (and Bjork) are among the bands supporting BDS.

In fact, U2 performed in Tel Aviv in 1997, and their front man, Bono, visited the state (which included a trip to the Western Wall) with his family in 2012.

(Two more noteworthy facts: Bono was known for his friendship with the late Israeli leader Shimon Peres. Also, U2’s manager is an Israeli-American named Guy Oseary who has attended fundraisers for Friends of the IDF – a fact ‘noted‘ by the hate site, Electronic Intifada.)

The Guardian error was later corrected in the online edition and the following addendum added: