A BBC report amplifies condemnation of a statement that has not yet been made.

An article published on the BBC News website on December 4th devoted over 40% of its word count to amplification of condemnation of a statement that has not yet been made.

Promoted on the website’s main home page as well as its ‘World’ and ‘Middle East’ pages under the title “Jordan warns US over Jerusalem issue”, the article itself ran with the headline “Jordan urges US not to recognise Jerusalem as Israel capital“. 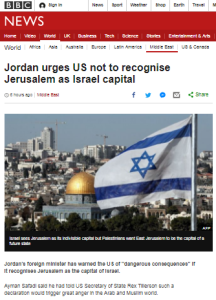 “Jordan’s foreign minister has warned the US of “dangerous consequences” if it recognises Jerusalem as the capital of Israel.

Ayman Safadi said he had told US Secretary of State Rex Tillerson such a declaration would trigger great anger in the Arab and Muslim world. […]

In a tweet, Mr Safadi said: “Spoke with #US Secretary of State Tillerson on dangerous consequences of recognising Jerusalem as capital of Israel. Such a decision would trigger anger across #Arab #Muslim worlds, fuel tension & jeopardise peace efforts.” […]

Palestinian President Mahmoud Abbas is trying to rally international support to persuade Mr Trump not to make the announcement.

His office said he made phone calls on Sunday to world leaders including French President Emmanuel Macron and Turkish President Recep Tayyip Erdogan.

He wanted to “explain the dangers of any decision to move the [US] embassy to Jerusalem or recognise (Jerusalem) as Israel’s capital”, Mr Abbas’s adviser Majdi al-Khalidi told the AFP news agency.

Palestinian leaders have previously warned the move would threaten a two-state solution.”

So what is the background to that furious rhetoric? The BBC’s explanation is as follows:

“Speculation is mounting that President Donald Trump will announce the move soon, fulfilling an election pledge.

Jared Kushner, Mr Trump’s son-in-law, said no decision had yet been made. […]

During last year’s election campaign, Mr Trump expressed strong support for Israel and promised to order the relocation of the US embassy from Tel Aviv to Jerusalem on his first day in office.

He has since delayed any such decision but speculation has mounted that he may make the declaration in a speech on Wednesday.”

However, the BBC made no effort to clarify to readers that the source of that unattributed “speculation” is apparently mostly anonymously sourced media reports  or that the White House has to date made no official comment confirming such speculations.

Whether or not the US President will make a statement on Wednesday that includes recognition of Jerusalem as Israel’s capital and/or announcement of the establishment of a US embassy in that city remains to be seen.  In the meantime, however, the BBC continues to promote an editorial line that has been in evidence throughout the past year: nowhere in this report were readers told of the existence of the US’s ‘Jerusalem Embassy Act of 1995’ and the related (and often misrepresented) bi-annual waivers signed by a succession of US presidents.

While that context is obviously important to understanding of the wider background to this story, the BBC did not provide it to readers. Neither did it bother to inform them that the current US president was by no means the first to have “promised to order the relocation of the US embassy from Tel Aviv to Jerusalem”: both Bill Clinton and George W Bush made the same pledge.

Another important part of the context to this story is of course Jerusalem’s historical background. As is more often than not the case in BBC content, the writer of this report would apparently have readers believe that the city’s history began in June 1967:

“Israel has occupied East Jerusalem since the 1967 Middle East war. It annexed the area in 1980 and sees it as its exclusive domain.

Israel is determined that Jerusalem be its eternal, indivisible capital. But Palestinians want East Jerusalem to be the capital of a future state.”

Similar wording was seen in a BBC report relating to similar subject matter published six months ago and then as now, no effort was made to inform audiences of the relevant fact that the city was divided for the first time in its long history when Jordan belligerently conquered parts of Jerusalem in 1948 and that the subsequent 19 year Jordanian occupation was not recognised by the international community.

Throughout the past year the BBC has repeatedly provided amplification for unchallenged PLO messaging to the effect that the opening of a US embassy in Jerusalem would bring an end to the chances of a solution to the Palestinian-Israeli conflict and spark regional violence. If the US administration does make a statement concerning Jerusalem later this week, BBC audiences will be badly placed to understand the background to that story due to having been consistently deprived of relevant context – as we once again see in this report.