What was BBC Audience Services' response to a complaint about anti-Israel slurs?

As readers may recall, viewers of the January 27th edition of ‘Dateline London‘ saw panellist Nabila Ramdani promote a host of politically motivated falsehoods intended to delegitimise Israel that went completely unchallenged by the programme’s presenter. 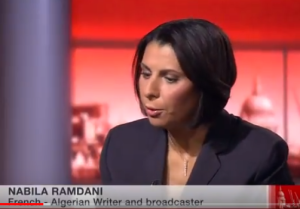 Ramdani: “I think the only group that Trump expressed his usual venal prejudice towards at Davos was the Palestinians. And of course at the time he was sitting next to his ideological ally and close friend Binyamin Netanyahu. And he effectively said that he wanted to stop millions of dollars of aid to Palestinians because the Palestinian Authority showed disrespect – as he put it – towards Mike Pence, his vice-president, during his recent visit to Israel. So essentially Donald Trump accuses the Palestinians of not being polite enough as their land is stolen, as they are routinely murdered in their thousands, imprisoned in their hundreds and undergo in all manners, all manners of human rights abuses. And there was of course no mention of the incredibly provocative decision to move the US embassy to Jerusalem while completely ignoring the Palestinian right to East Jerusalem as their capital. And what I found particularly disdainful was the way Trump threatened to wash his hands of the entire Israel peace process, making out that he’d had quite enough of the boorish Palestinians, again signalling that they should somehow accept their fate and also be polite towards the billions of dollars poured into Israel to ruin their lives.”

Just last year the BBC responded to a complaint concerning similarly inaccurate claims made by Nabila Ramdani on the same programme with the same presenter by saying that it had “spoken to the production team and presenter to remind them of the need to ensure that any contentious remarks are challenged and questioned, at whatever point they are made during the programme.”

However, when BBC Watch submitted a complaint concerning Ramdani’s latest remarks, the response received included the claim that such calumnies are part of a “legitimate debate”.

“Thank you for contacting us about ‘Dateline London’ broadcast 27 January.

We appreciate you raising this issue with us and bearing in mind that six months ago, a similar point was raised with the programme regarding the same contributor.

After Nabila’s comments, Jane responded by emphasising her take on the Middle East conflict would be something to talk about on another day, since the focus in that edition was instead on the Davos forum.

While it’s clear you would have preferred to hear a counter-argument to the view just expressed, that was not the intended topic. We ensure instead that a range of opinions and perspectives on Middle East politics are entertained over time, when specifically addressing those policies as a group of panellists.

We invite a wide range of contributors on to our programming. The decision to invite these contributors is based on a variety of factors, including their insight on a certain chosen field. The range of tastes and opinions held by our audience is so diverse that it’s inevitable some viewers will disagree with certain guests or the opinions they express.

Our aim is simply to provide enough information for viewers to make up their own minds. This may include hearing opinions or accounts which some people may personally disagree with, but which individuals may be fully entitled to present in the context of a legitimate debate.

We hope this explains our approach.”

It certainly does indeed.