Visitors to the BBC News website’s ‘Middle East’ have in recent days seen two written reports relating to the discovery of cases of Coronavirus in the Gaza Strip and the subsequent lockdown: 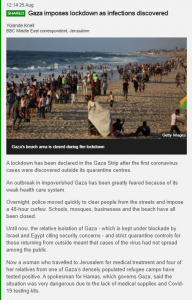 The BBC Jerusalem bureau’s Yolande Knell also produced an audio report on the same subject which was aired (from 21:48 here) on BBC Radio 4’s ‘PM’ on August 26th.

All those reports made references to the blockade imposed on the Gaza Strip by Israel and Egypt without providing a proper explanation of why it was put in place. BBC audiences were not informed that the Gaza Strip has been controlled by a terrorist organisation for the past 13 years following a violent coup or that during that time, thousands of terror attacks have been launched against Israeli civilians from the territory. [emphasis added]

Report 1: “Until now, the relative isolation of Gaza – which is kept under blockade by Israel and Egypt citing security concerns – and strict quarantine controls for those returning from outside meant that cases of the virus had not spread among the public.”

Report 2: “Previously, our correspondent adds, the relative isolation of the territory – kept under blockade by Israel and Egypt – and strict quarantine controls meant that Covid-19 had not spread among the general population.” 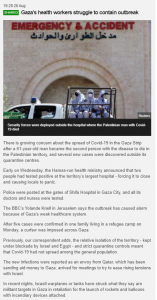 Audio report (Carolyn Quinn, introduction): “There are fears of the first major outbreak of Coronavirus in the impoverished Gaza Strip. Until this week it had seemed that the relative isolation of Gaza, which is kept under blockade by Israel and Egypt, had worked to protect it as cases had been limited to quarantine centres. But today one man died of Covid and cases were found at two hospitals.”

Moreover, in her audio report Yolande Knell implied linkage between the blockade and the state of healthcare in the Gaza Strip:

Knell: “Well there was a sense of panic in Gaza today. This was the scenario that the World Health Organisation had warned about. Gaza has been under a tight blockade since the militant group Hamas took over more than a decade ago and as its 2 million residents know only too well, it has a broken healthcare system. It’s got shortages of drugs, shortages of medical equipment, it only has about 100 ventilators.”

None of those reports informed BBC audiences that the restrictions imposed by Israel on the entry of goods and materials to the Gaza Strip are confined to dual-use items: i.e. those which can be used for the purpose of terrorism.

Report 1: “An outbreak in impoverished Gaza has been greatly feared because of its weak health care system.”

Report 2: “The BBC’s Yolande Knell in Jerusalem says the outbreak has caused alarm because of Gaza’s weak healthcare system.”

However – as is more often than not the case in BBC reporting on that topic – audiences were not provided with any information on how infighting between Hamas and Fatah – along with Hamas’ prioritisation of terror over civilian welfare – has affected services such as water, power and healthcare in the Gaza Strip.

When the Covid-19 pandemic began BBC audiences were told in various reports that there were between 50 and 87 ventilators in the Gaza Strip. Yolande Knell’s statement that there are now “about 100 ventilators” in the Gaza Strip probably reflects the fact that the World Health Organisation has in recent months delivered ventilators, testing kits and additional medical equipment to the territory – unreported by BBC News – with Israel’s cooperation.

Two of the above reports mentioned the visit of the Qatari envoy to the Gaza Strip on August 25th but not the $30 million in cash he brought with him. 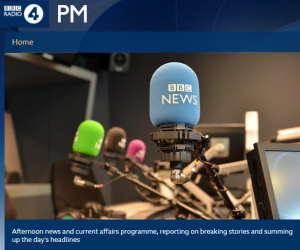 Report 2: “The new infections were reported as an envoy from Qatar, which has been sending aid money to Gaza, arrived for meetings to try to ease rising tensions with Israel.

In recent nights, Israeli warplanes or tanks have struck what they say are militant targets in Gaza in retaliation for the launch of rockets and balloons with incendiary devices attached.”

Audio report: Knell: “Well the new infections come just as tensions have been rising with Israel. In recent successive nights Israeli war planes or tanks have struck what they say are militant targets in Gaza in retaliation for the launch of rockets and also incendiary devices which are attached to balloons. An envoy from Qatar, which has been sending aid money into Gaza, went in despite the strict quarantine rules to see what can be done to calm the situation. But for ordinary people in Gaza who’ve just lived through so much conflict and hardship, there are now these new worries.”

Contrary to Knell’s claim, those “tensions” began three weeks prior to “the new infections” when Hamas decided to renew attacks against Israeli civilians using rockets, incendiary balloons and airborne explosive devices. BBC audiences were not told anything about the link between the renewal of those attacks and Hamas’ reported demand (and associated threats) for an increase in the amount of “aid money” from Qatar.