Most British outlets which covered the death eight-month-old Layla al-Ghandour have failed to publish allegations that Hamas paid the girl's family to tell the media that Israeli tear gas caused her death though the real culprit was a pre-existing blood condition.

UK media outlets have largely attributed the death in Gaza of eight-month-old Layla al-Ghandour on May 15 to tear gas used by the IDF to quell violent border riots. Though serious questions were raised about the Palestinian girl’s death from out outset, most reporters appeared to accept the family’s claim that the girl accidentally ended up at the border clashes and died of asphyxiation as a result of inhaling the commonly used riot control agent.

Most reports included heart breaking photos of the mourning Palestinian mother, like this at The Telegraph. 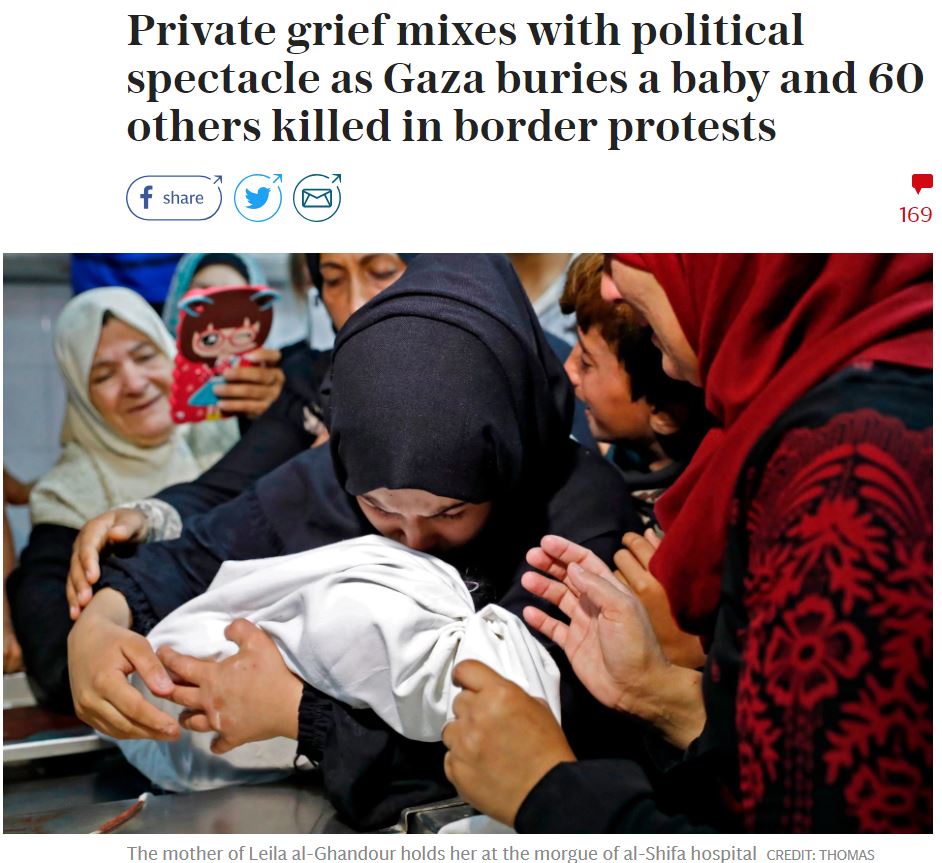 The Independent even seemed to evoke, in an official editorial, some sort of moral equivalence between Bashar al-Assad’s use of chemical weapons against civilians and Israel’s use of tear gas (which they actually referred to as the “gassing” of a baby) in Gaza.  Though most reports didn’t go as far as the Indy in attempting to demonise Israel, the story of the baby’s death, allegedly at the hands of Israel, dominated British media coverage of the border riots at the time.

However, most British outlets – as with Western media outlets more broadly – have ignored a major new development.

According to the indictment of Layla’s relative, Mahmoud Omar, Hamas leader Yahua Sinwar paid the family to tell the media that tear gas caused her death though the real culprit was the same blood condition that killed her brother the year before.

Under interrogation in Israel, Omar, who is Layla al-Ghandour’s cousin, said Hamas leader Sinwar paid the baby’s family 8,000 shekels ($2,200) to accuse Israel of the death of the 8-month-old. The claim came despite the fact that members of the family had previously said that she died of a blood disorder, a condition that the baby’s six-month-old brother apparently also died of last year.

When news surfaced of the claim that Layla al-Ghandour had died from inhaling tear gas, Israeli army officials cast doubt on the allegation, saying that the army had evidence that called the family’s claim into question.

According to the indictment against Omar, on the day that Layla al-Ghandour died, Omar’s mother called him while he was participating in a demonstration near the border fence and told him about the child’s death. Omar is said to have been told on returning home that the baby had died of the same blood disease that took the life of her brother.

Yet, with the exception of the Daily Mail, British outlets which covered the story have failed to publish this new information.  Outlets which reported the original Hamas claims yet have ignored these new revelations include The Guardian*, The Independent, The Telegraph, Times of London,Evening Standard, Sky News, Financial Times, and Metro UK.

We’re currently in contact with these outlets in an attempt to convince them of the need to set the record straight.

(*Whilst The Guardian did publish one follow-up report about the girl’s death on May 24th, noting that the Gaza Health Ministry temporarily removed her from their list of those killed during clashes, they haven’t noted reports that Hamas actually paid the family to blame Israel.)