An article in The Times included, as a bit of historical context on the new US peace plan, a list of "Failed Peace Attempts" going back to 1919. However, the list curiously omits two historically significant peace efforts – in 1947 and 2008:

An article in The Times (Can Jared Kushner sell a peace deal without the Palestinians?, July 5th) by Anshel Pfeffer and Catherine Philp included, as a bit of historical context on the new US peace plan, a list of “Failed Peace Attempts” going back to 1919:

Failed attempts at peace
1919: The Faisal-Weizmann Agreement tried to settle disputes that emerged during the First World War, but the momentary peace was short-lived and the agreement was ultimately unsuccessful.

1949: The Armistice Agreements ended the official conflicts of the Arab-Israeli War of 1948 and established relative peace between Israel and the West Bank until the Six-Day War of 1967.

1978: The Camp David Accords were signed by Egypt’s President Sadat and the Israeli prime minister Menachem Begin and witnessed by President Carter. The Accords led to the Israel-Egypt Peace Treaty of 1979.

1991: The Madrid Conference hosted by the Spanish government, aided by the US and the Soviet Union, was an attempt by the international community to begin a peace process through negotiations involving Israel, the Palestinians and Arab countries including Syria, Lebanon and Jordan.

1993: The Oslo Accords were the first face-to-face agreements between Israel and Palestinian politicians, who publicly acknowledged Israel’s right to exist for the first time.

2000: The Middle East Peace Summit at Camp David in July 2000 between President Clinton, the Israeli prime minister Ehud Barak and the Palestinian president Yasser Arafat was ultimately unsuccessful in attempting to negotiate a “final status settlement” to the Israeli-Palestinian conflict.

2002: The Beirut Summit was held to present plans to defuse the conflict.

2002: The Roadmap for Peace was a plan to resolve the Israeli-Palestinian conflict proposed by international powers: the United States, the European Union, Russia and the United Nations. The plan called for an independent Palestinian state living alongside Israel in peace. The plan reached a stalemate early on in negotiations and was never implemented.

Note that the list omits two historically significant peace efforts – in 1947 and 2008:

In November 1947, UN Resolution 181, the Partition Resolution passed, calling for the creation of a Jewish state and an Arab state. The Palestinians and Arab countries opposed the resolution, voted against it, and threatened war to prevent it from being implemented.  The Jewish Agency, representing the Jewish inhabitants, supported the plan. The Times failed to mention this in their list of “failed peace efforts”.

Ehud Olmert’s widely reported far reaching offer to Mahmoud Abbas in 2008 was also omitted by The Times.  The offer was rejected by the Palestinian leader.  In 2009, The Times’ Middle East correspondent reported on the proposal (“How Ehud Olmert mapped a vision for peace in West Bank”), and noted both Abbas’s rejection and the details of Israel’s offer.  The proposal addressed all the core issues of the conflict and would have created a Palestinian state in Gaza and 97% of the West Bank (with land swaps for the remaining 3%).  The Palestinian state also would have included a capital in east Jerusalem.

Here’s a map of the offer published by Haaretz: 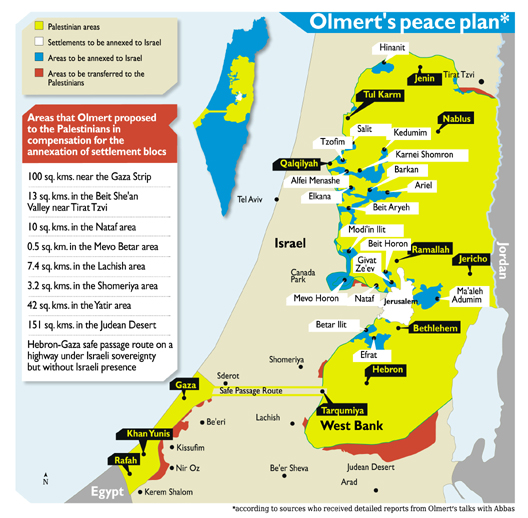 We’ve complained to editors about these omissions.

On a separate issue, the article also reminded readers that Jared Kushner, the President’s son-in-law and a Senior White House Adviser, was an “Orthodox Jew”.

Can Mr Kushner, who ordered that move [the US embassy’s relocation to Jerusalem] and who is himself an Orthodox Jew with deep ties to Israel’s settlement project, bring peace to the Middle East without the buy-in of the Palestinians?

First, it’s absurd to claim that Kushner “ordered” the move to Jerusalem, a decision which was of course made by the President.  Moreover, why is Kushner’s religion relevant to the story? His ties to the settlements are fair game (as they could reasonably be construed as a conflict of interest), but it’s difficult not to read in the sentence the suggestion that an American Jew – or, at least, an “Orthodox” Jew – would be more loyal to Israel than to his own country.

Note that the IHRA Working Definition of Antisemitism includes the following as an example of antisemitism:

Accusing Jewish citizens of being more loyal to Israel, or to the alleged priorities of Jews worldwide, than to the interests of their own nations.

We lodged a complaint, under Discrimination clause of the Editors’ Code, concerning the gratuitous reference to Mr. Kushner’s religion.