In part one of this post we looked at how the story of the UK Labour Party leader’s participation in an event in Tunisia in 2014 that had been the subject of a report in a British newspaper three days earlier was presented to the BBC’s domestic audience on BBC Radio 4 on the evening of August 13th. 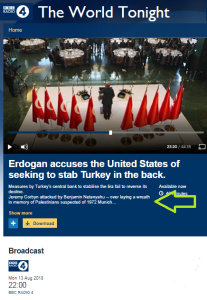 Later the same evening the BBC Radio 4 programme ‘The World Tonight’ also aired a long item on the same story:

“Jeremy Corbyn attacked by Benjamin Netanyahu — over laying a wreath in memory of Palestinians suspected of 1972 Munich massacre.”

In her introduction to the item (from 16:28 here) presenter Ritula Shah managed to twist a story that first emerged in 2017 and was again taken up by a British newspaper in recent days into an ‘accusation’ from the Israeli prime minister. [emphasis in italics in the original, emphasis in bold added]

Shah: “The Israeli prime minister Benjamin Netanyahu has criticized Jeremy Corbyn and accused him of laying a wreath on the grave of one of those behind the Munich Olympics massacre in 1972 in which 11 Israeli athletes died. A photo of Mr Corbyn holding a wreath at the Palestinian Martyrs’ Cemetery in Tunisia in 2014 was published by the Daily Mail. The events of 1972 shocked the world. Here’s a flavour of how the BBC reported the event at the time.”

After listeners had heard an archive recording, Shah went on to read out Corbyn’s Tweet:

Shah: “Well tonight the Labour leader’s responded to the Israeli prime minister’s statement in a Tweet saying ‘at Netanyahu’s claims about my actions and words are false. What deserves unequivocal condemnation is the killing of over 160 Palestinian protesters in Gaza by Israeli forces since March, including dozens of children’.”

Listeners were not provided with any context to Corbyn’s ‘whataboutery’: the fact that a significant proportion of those dubbed ‘protesters’ by Corbyn were linked to terror factions and killed during violent rioting and attacks was not clarified by Shah before she continued.

Shah: “In an interview earlier today Mr Corbyn was asked to respond to the wreath-laying claim.”

Listeners then heard a recording of part of that interview.

Recording Corbyn: “A wreath was indeed laid by some of those who attended the conference for those who were killed in Paris in 1992.

Interviewer: “Were you involved in that wreath laying?”

Shah: And that reference to Paris in 1992 by Jeremy Corbyn refers to the assassination of Atef Bseiso who was a senior member of the PLO who was allegedly killed by the Israeli secret service in revenge for the Munich attack.”

Shah then introduced her sole interviewee – a member of a pro-Corbyn fringe group called ‘Jewish Voice for Labour’ which – despite the fact since its formation last year, BBC audiences have seen its representatives interviewed and quoted in dozens of items of BBC content – just the previous week organised a demonstration outside the BBC’s main London building to protest “the BBC’s failure to report fairly and impartially about the attacks on Jeremy Corbyn’s leadership of the Labour Party”.

Shah; “Well joining me now is Glyn Secker, secretary of the pro-Corbyn group Jewish Voice for Labour. […] do you think that reference to Paris in 1992 is essentially an attempt to distract from Bseiso’s involvement in the 1972 Munich Olympics attack?”

Radio 4 listeners first heard the unsubstantiated claim that the Daily Mail had doctored the photographs.

Secker: “Yes, I mean the commemoration of the Munich…of the deaths in Munich…ahm…when it is reported by the Daily Mail it is quite devious because yes, they have a picture of Jeremy Corbyn holding a wreath and it’s in that cemetery but actually they’ve switched – and you can see from the analysis of the photographs – they’ve switched the graves around. There’s one picture of him standing at a different grave – not the one where they were laying the wreath – and I think that must have been the grave of the terrorist. Jeremy Corbyn is standing there with his hands in his pocket, obviously not being very respectful.”

Next Secker conjured up a hypothetical situation to add to his photo doctoring conspiracy theory:

Secker: “Well he’s not…well he wasn’t…well if you’re with a group of people, you’re there as their guest and they then say please will you walk over to this side of the cemetery and you follow them and then you find that they’re laying a wreath and you can see the wreath on this grave in the photograph but as I say, Jeremy Corbyn is standing there with his hands in his pockets – not a mark of respect for that grave – so I think what’s happened is the photograph of him holding the wreath is actually cropped at the bottom so you can’t see the grave and they’ve taken the picture where he was laying a wreath to the…to all the victims and they’ve switched it and made it look like something other.”

Listeners then heard irrelevant linkage of the issue of the UK Labour Party leader honouring terrorists to the topic of antisemitism.

Secker: “Now as Jews we do not take instruction from the Daily Mail about antisemitism. They backed Mosley in the 1930s…”

Shah: “But – hang on a minute – are you accusing the Daily Mail of antisemitism?”

Secker: “Ah well, I’m accusing them certainly historically of antisemitism – yes. They backed Mosley. They published in 1938 an article saying the country was being flooded by Jews.”

Pointing out that the Daily Mail was not there to reply to Secker’s allegations, Shah tried to drag the conversation back onto topic.

Shah: “I’m quite confused by the answer that you just gave and I dare say other people are. But Jeremy Corbyn is not denying that he was present at this wreath laying, that he was in this cemetery in Tunis. What is the difference between that and actually…he may not physically have literally laid the wreath but he was there.”

Yet again listeners had to listen to Secker’s hypothetical speculations.

Secker: “But if he’s been asked to walk over by his guests [sic] to the other side of the…of the cemetery – which looks very clearly as if that’s what happened – and he goes and stands with them at the grave of this terrorist and he stands there with his hands in his pockets – not marking respect at all to that person – that speaks volumes for what he was thinking.”

Shah: “Why does it matter so much that he had his hands in his pocket? He was there.”

Secker: “Well I tell you, if he was visiting my father’s grave and he stood there with his hands in the pockets I would be very offended.”

Shah: “So you think there is a difference between being present with your hand in your pocket but not actually involved?”

Shah: “Do you think those distinctions are so nuanced as to be almost irrelevant?”

Secker: “No they’re not irrelevant because the way the Daily Mail presents it is that he’s laying a wreath to a terrorist and he wasn’t and he said he wasn’t. That’s a big story and he’s denying it and I think that’s correct.”

After those four minutes of discussion concerning Jeremy Corbyn’s pockets, Ritula Shah then gave Secker the cue to irrelevantly opine on Israel. It would of course at that point have been appropriate for her to clarify to listeners that the speaker they were hearing is not just a member of a “pro-Corbyn group” but also an anti-Israel campaigner who captained an attempt to breach the naval blockade which prevents Hamas smuggling weapons into the Gaza Strip and was briefly suspended by the Labour Party in March due to his membership in a secret Facebook group where antisemitic and anti-Israel content is rife.

Shah: “Benjamin Netanyahu says that this deserves unequivocal condemnation from everyone. Why does Mr Corbyn then say that’s false?”

Secker: “Well because he didn’t do it and therefore there was nothing for him to be condemned for. I would condemn Netanyahu for welcoming eh…the…ah…Orban the president [sic] of Hungary to his…to his country. He’s the leader of an extreme right-wing organization. I would condemn Netanyahu for making a deal with the Polish prime minister that the Poles are no longer responsible for the Holocaust. We lost family in the Holocaust.”

Shah: “Do you understand why this is so difficult for Jeremy Corbyn? It’s simply another, another allegation in a situation where he’s constantly being accused of antisemitism…”

Shah: “…of acts which can be interpreted as antisemitic.”

Secker: “Yes, it’s horrific for him. I’ve spoken on the same platform as Jeremy. I know him personally. There’s not an anti-Semitic or racist bone in his body. He’s a…he’s very strongly anti-racist. And this has been whipped up as a way of silencing criticism of Israel’s human rights violations against the Palestinians and is being used to bring him down politically.”

With that dose of the Livingstone Formulation Ritula Shah ended the item.

However, that was not the last that Radio 4 listeners heard from Glyn Secker: his Livingstone Formulation promotion was also featured two hours later in a report by Tom Barton aired in the station’s ‘Midnight News’ bulletin (from 00:54 here):

Barton: “Saying that he didn’t think he was involved hasn’t satisfied Mr Corbyn’s critics. The Jewish Labour MP Luciana Berger said that being present was the same as being involved. But the labour leader’s supporters say he’s being treated unfairly. Glyn Secker, the secretary of the pro-Corbyn group ‘Jewish Voice for Labour’.

Secker: “Yes, it’s horrific for him. I’ve spoken on the same platform as Jeremy. I know him personally. There’s not an anti-Semitic or racist bone in his body. He’s a…he’s very strongly anti-racist. And this has been whipped up as a way of silencing criticism of Israel’s human rights violations against the Palestinians and is being used to bring him down politically.”

Barton: “As the Labour leadership tries to bring the wider row over antisemitism under control, the intervention of the Israeli prime minister isn’t going to make that task any easier.”

As we see, on a day when the leader of Her Majesty’s opposition – and a potential prime minister – had admitted to having taken part in a ceremony honouring terrorists while participating in a conference together with members of additional terrorist organisations, the best the BBC could do for its British audiences was to present them with nearly seven minutes of discussion about Jeremy Corbyn’s pockets, conspiracy theories about doctored photos and irrelevant anti-Israel smears from an inadequately introduced anti-Israel activist.