The August 25th edition of the BBC Radio 4 ‘Today’ programme included an item relating to the story which had been reported in the same station’s news bulletins the previous evening: that of Jeremy Corbyn’s 2013 remarks concerning British Zionists who he said: 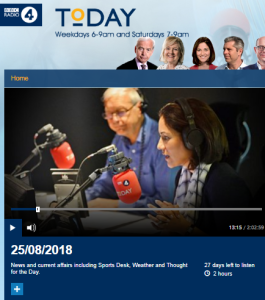 “…clearly have two problems. One is that they don’t want to study history, and secondly, having lived in this country for a very long time, probably all their lives, don’t understand English irony either.”

Co-presenter Justin Webb introduced that item (from 11:39 here) as follows: [emphasis in italics in the original]

Webb: “A statement last night from Jeremy Corbyn on those remarks about British Zionists and their failure to understand irony. Our political correspondent Tom Barton is here. What’s he saying now, Tom?”

Barton: “Well of course for months Jeremy Corbyn’s faced criticism over the way the Labour Party has handled complaints of antisemitism and one of the key issues has been about the words people use and in particular how that term – Zionist – can be used to attack the Jewish people as a whole. And now Jeremy Corbyn has had to defend his own use of that word after a speech in 2013 where he talked about British Zionists who he said may have lived in this country for a very long time, perhaps all of their lives, but – who he said – didn’t understand English irony. Now he was talking in particular about a group of pro-Israel activists who he said had berated the Palestinian representative to the UK following a speech in Westminster a little before that speech that he made in 2013. It drew criticism though from several Labour MPs including Luciana Berger who said the comments were inexcusable. Well last night Jeremy Corbyn published a statement saying that he used the term Zionists – in his words – in the accurate political sense to describe pro-Israel campaigners and not – he said – as a euphemism for Jewish people. He also though said that he is now more careful about how he uses the term Zionist because he says it has been increasingly hijacked by antisemites as code for Jews.”

Justin Webb then apparently tried to raise a relevant point which had been glaringly absent from BBC Radio 4’s previous coverage of the story.

Webb: “But when he said…when he said ‘having lived in this country for a long time, probably all their lives’, that then doesn’t sound as if he’s referring to a group that isn’t in a sense ‘other’.”

Barton: “And this is it, so Labour’s defence of that point is that he was talking in context, very particular, particularly about a group of people, pro-Israel activists who were made up of both Jewish people and non-Jewish people and he was using…”

Barton: “…it to refer to…ah…this particular group of activists and not – they say – to the Jewish community.”

Did Tom Barton bother to fact check that Labour “defence” before regurgitating it on air? Did he ask the Labour Party how exactly it had determined the religion/ethnicity of people it claimed attended an event in Parliament over five and a half years ago? Apparently not.

The person who recorded the PLO envoy’s speech in Parliament in January 2013 was Richard Millett. As i24 News reported:

“Millett says he does not recall “berating” the Palestinian envoy at the end of the 2013 event in Parliament, but is convinced that Corbyn was referring to his blog criticizing Hassassian’s remarks, saying he does not recall any other pro-Israel activists in the audience.” [emphasis added]

In the video of Corbyn’s 2013 speech he does not mention “a group of people” – let alone their ethnic/religious origins – but refers only to “Zionists”.

Moreover, from remarks made by Corbyn before that ‘English irony’ claim – remarks which were edited out of the video – it is obvious that he was indeed talking about Zionist British Jews rather than “this particular group of activists”.

And as Tom Barton’s Twitter feed shows, he knew that video had been edited and was later provided with the transcript of the rest of Corbyn’s speech.

Webb and Barton closed the item by discussing the potential effects of Corbyn’s statement would “make a difference” within the Labour Party itself.

As we see not only were the BBC’s domestic audiences once again not given any explanation as to why Corbyn’s remarks were regarded by many as offensive and antisemitic, but the BBC’s political correspondent quickly quashed that line of discussion with unquestioning repetition of an obviously inadequately checked statement given to him by team Corbyn.

So much for the BBC’s ‘public purposes‘ pledge to its funding public:

“The BBC will provide accurate and impartial news, current affairs and factual programming of the highest editorial standards so that all audiences can engage fully with issues across the UK and the world.”

More promotion of the Livingstone Formulation from BBC News