Stage 2 complaint secures a link to a clarification.

When the BBC issued a clarification last week concerning an inaccurate portrayal of the Christian population in Israel in a BBC Radio 4 programme on December 26th we noted that:

“Unfortunately, however, despite that clarification the programme itself is currently still available online (from 07:24 here) in its original and inaccurate form and with no link provided to the clarification.”

BBC Watch submitted a Stage 2 complaint to the BBC’s Editorial Complaints Unit (ECU) concerning that issue and has received the following reply:

“Thank you for your enquiry, involving the clarification concerning The World at One, broadcast on the 26th December 2018. The ECU have passed this along to our team to send you the response.

We would like to thank you for bringing this to our attention. We have now added the link for the C&C site to the iPlayer page that hosts this edition of the programme: 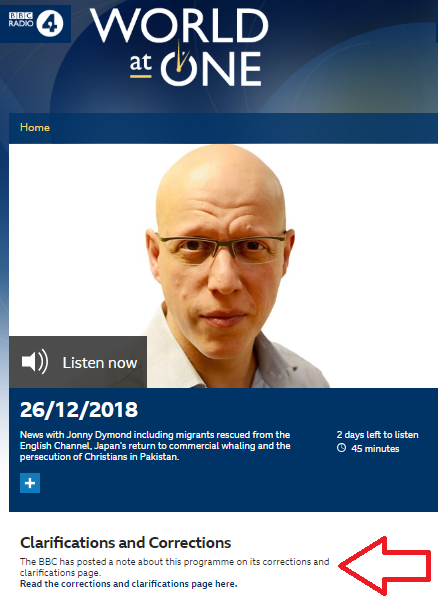 The BBC’s response to a complaint about Christians in Israel