A commission of inquiry investigated the killing of 189 Palestinians between 30 March and 31 December 2018.

It found reasonable grounds to believe that Israeli snipers shot at children, medics and journalists, even though they were clearly recognisable as such.

As has been documented here over the past eleven months, the BBC’s reporting on the ‘Great Return March’ violent rioting has uniformly portrayed the events as “protests” and “demonstrations” and has repeatedly downplayed or erased their violent nature. This latest report continued that framing.

“Palestinians have been taking part in protests along the border since last March as part of a campaign, dubbed “the Great March of Return”, in support of the declared right of Palestinian refugees to return to their ancestral homes in what is now Israel.”

As has been the case in previous BBC reporting, no explanation of the significance of that “declared right” and the fact that the aim of that demand is to threaten the existence of Israel as the Jewish state was provided to readers.

Over the past eleven months we have also repeatedly documented the fact that the BBC has downplayed or erased Hamas’ role in initiating, organising and facilitating the ‘Great Return March’ violent rioting along the border between Israel and the Gaza Strip. In this report, however, the BBC had no choice but reflect the UNHRC’s acknowledgement of Hamas’ role.

“The campaign has been organised by the militant Hamas movement – which dominates Gaza and is designated a terrorist group by Israel – and other groups.”

Hamas is of course also designated as a terrorist group in whole or in part by additional countries and bodies including the EU, the US, Australia, New Zealand, the UK, Japan and Canada.

Obviously this report could not be complete without provision of an overview of both the UNHRC’s longstanding anti-Israel bias and the one-sided mandate of the specific ‘investigation’ which led to the publication of the report which is its subject matter. The BBC however failed to provide readers with that crucial information.

“The commission of inquiry, which was set up by the UN Human Rights Council in May, said on Thursday that more than 6,000 unarmed demonstrators were shot by military snipers at designated protest sites over nine months.

It investigated the deaths of 189 Palestinians at the sites on official protest days and found that Israeli forces had killed 183 with live ammunition. Thirty-five of the fatalities were children, while three were clearly marked paramedics, and two were clearly marked journalists, the commission found. […]

Unless undertaken lawfully in self-defence, intentionally shooting a civilian not directly participating in hostilities is a war crime.”

The BBC’s article continues to quote the UNHRC report and its authors at length, including the following:

The BBC’s article made no effort to explain to audiences that the fact that some of the fatalities were children or “clearly marked paramedics” or “clearly marked journalists” does not exclude the possibility of links to terror organisations.

For example in May 2018 the BBC published a report in which it was claimed that “one paramedic was killed and several others were wounded on Monday as Israeli troops opened fire during the protests.” That same paramedic appeared in a poster released by Hamas showing some of its members killed on May 14th.

Journalists killed during the ‘Great Return March’ rioting have also been shown to have links to terror groups:

“An examination of Ahmed Abu Hussein’s identity revealed that in addition to being a media person, he was also a PFLP operative. The PFLP’s military wing issued formal death notices for him on its website. […]

According to Israeli security sources, Yasser Murtaja had served for years as an officer with the rank of captain in the Hamas security services in the Gaza Strip. The same sources added that he was an active operative in the security services and greatly assisted them in their activity on a daily basis.”

Among the under-18s killed were those with direct links to Hamas who were sent to sabotage the border fence while others – such as Ahmad al-Sha’ar [also al Shaer] who is named on page 9 of the UNHRC report – were terror operatives (see page 20 here). 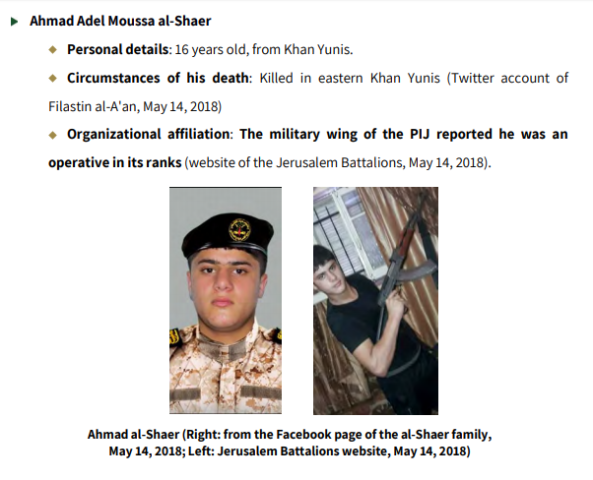 In fact around 80% of those killed during the ‘Great Return March’ have been shown to be affiliated with terror factions – a fact totally ignored by the BBC in its unquestioning amplification of this UNHRC report.

Thus BBC audiences were denied the ability to judge for themselves the UNHRC’s preposterous claim that the violent rioting is “civilian in nature”.

“…it [the commission] concluded the demonstrations were “civilian in nature”, with clearly stated political aims, and that despite some acts of significant violence they did not constitute combat or military campaigns.”

So much for the BBC’s public purpose obligation to “provide accurate and impartial news, current affairs and factual programming of the highest editorial standards so that all audiences can engage fully with issues across the UK and the world.”

Why did the BBC News website erase an accurate statement?

UK government’s UNHRC statement not newsworthy for the BBC