A Palestinian described by Tom Bateman as the uncle of one of his interviewees turns out to be a member of a terrorist organisation.

The May 11th edition of BBC Radio 4’s ‘From Our Own Correspondent’ was titled “Airstrikes and Sirens”. As listeners would soon learn, the word ‘airstrikes’ refers to the Gaza Strip and the word ‘sirens’ (rather than ‘rocket attacks’) refers to Israel. A photograph depicting damage at an unnamed site in the Gaza Strip was used to illustrate the programme’s web page. 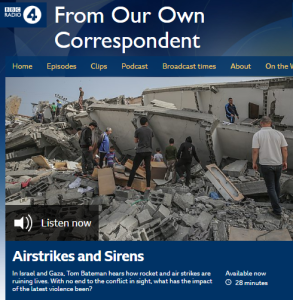 The synopsis to the programme’s lead report by Tom Bateman reads as follows:

“In Israel and Gaza, Tom Bateman hears how rocket and air strikes are ruining lives. With no end to the conflict in sight, what has the impact of the latest violence been?”

Adie: “But first, a ceasefire between Israel and militants in the Gaza Strip has been holding, after one of the worst flare-ups in recent years. Two days of fighting erupted after a Palestinian sniper shot and wounded two Israeli soldiers at the perimeter fence. In the intense military exchanges that followed, at least 25 Palestinians and four Israelis were killed. Our Middle East correspondent Tom Bateman has been hearing from some of those caught up in it.”

Four days before this programme was aired the ITIC had published a report showing that the majority of the Palestinians killed were terrorist operatives or members of terrorist organisations. The BBC chose to ignore that information, instead creating a false sense of equivalence between the Israelis killed in attacks targeting civilians and the Palestinian terror operatives killed in attacks on terror related targets.

Bateman opened his report with an emotive description of events at one site in the north of the Gaza Strip.

Bateman: “When Rafat Nasser [phonetic] ran into his apartment block he feared the worst. Masonry dust rained down in the darkness. The building, in a packed neighbourhood of the northern Gaza Strip, had partially collapsed. In the wreckage he looked hard and shouted out. There, among the rubble calling back, were his two teenage daughters Amira and Yaara [phonetic]. They were covered in debris, grey and unrecognisable, but they were alive. Rafat told me the block had just been targeted by an Israeli war plane. Its missiles struck the fifth floor, he said, completely destroying two apartments. Outside, Anas Abu Jidiyan [phonetic] raced to the scene. His uncle and aunt and their eleven-year-old son lived on the fifth floor. Anas used his bare hands to search through the rubble. He found the boy’s body lying in the street. He said it wasn’t until the morning after that other people found the remains of the child’s parents. ‘It is hard to describe’ says Anas – and he speaks more slowly – ‘that’s why we pray that no-one else will have to experience what we are going through’.”

While Bateman refrained from providing the name of the building and its exact location, we can obviously conclude that he is referring to a strike in northern Gaza in which a couple and their 11-year-old son were killed. The ITIC’s report includes casualties answering that description.

“Talal Atiya Muhammad Abu al-Jadyan, 46, killed in an attack on the Sheikh Zaeid Towers in the northern Gaza Strip (al-Quds, May 6, 2019). The PFLP issued a mourning notice for him, indicating he was member of the organization (PFLP website, May 6, 2019). […]

In other words the man described by Bateman merely as the “uncle” of one of his interviewees was in fact a member of the Popular Front for the Liberation of Palestine terror group.

Bateman however went on to tick the ‘impartiality’ box using the BBC’s classic ‘Israel says’ qualification and dutifully avoiding the word terrorist.

Bateman: “Israel said it targeted only legitimate military sites in Gaza. There were more than 300 strikes over the two days. Buildings were levelled, usually after being emptied. Where targets were residential blocks the army said this was because they were being used for militant activity. The escalation was sparked when two Israeli soldiers were shot and wounded, apparently by a gunman from Islamic Jihad. The militant group has been growing more audacious in Gaza, with a new leader seeking perhaps to carve out an even more hard-line image against that of the dominant force there, Hamas. At the funerals of the two militants killed by Israel in response there was a wave of anger and a barrage of rockets.”

Listeners were then given a misleading time frame for the rocket attacks by Palestinian terrorists which have been a regular occurrence for almost two decades, with Bateman claiming that the latest barrage was “fired at Israel” rather than at civilians.

Bateman: “The scream of the air-raid sirens in southern Israeli towns has become frequent in the last year. In the city of Ashdod I met Ephraim Cohen who lives in a six-storey block in a busy ultra-orthodox Jewish neighbourhood. ‘Look’ he said, showing me the blown-out window in his children’s room ‘how can kids grow up like this?’. Glass cracked underfoot as we walked through his ruined flat. Some 700 rockets were fired at Israel over the two days. Ashdod is about 20 miles north of the Gaza Strip. Ephraim described hurrying his children into the shelter. They sat inside reciting psalms as the sirens wailed. Six alarms went off and they sang more loudly each time. After the final one, he said, they chanted at the highest pitch and then there was a huge blast. A neighbour – 21-year-old Pinchas Pashwazman – had tried to run from the building to shelter. He was hit by shrapnel and killed. ‘Forget the politicians’ urged Ephraim ‘they are full of slogans’. ‘We just want results’ he said, ‘an end to this’.”

Failing to mention that in addition to the homes of civilians the terrorists also struck a hospital treating many of those injured in the attacks, educational facilities and a synagogue, Bateman returned to his main topic – Gaza – but avoided telling listeners why the general population there has “no shelters”.

Bateman: “In Gaza you can almost become numb to the cycle of destruction. The Israeli air strikes when they get close send shockwaves through surrounding buildings and create a feeling of total vulnerability. The drones buzz incessantly in the sky, searching out targets. There are no air-raid sirens or shelters for ordinary residents of Gaza; only the militants, it is said, can escape to their underground bunkers.”

Bateman then returned to his usual practice of describing the ‘Great Return March’ violent rioting as “protests”. He failed to clarify that what he described as “a series of…flare-ups” have in fact been exclusively the result of the decision by Gaza Strip based terrorists to attack Israeli civilians with military grade projectiles.

Bateman: “I have been in and out of the Strip over the past year as one story of Palestinian protests at the fence evolved into another; a series of ever more intense military flare-ups. While Israel and Hamas exchanged blows, they have also exchanged demands. Israel wants quiet. Hamas wants the blockade eased. These are old enemies: they don’t talk. So the head of Egyptian intelligence tries to broker calm one day and cash from Qatar via Israel to help relieve Gaza’s appalling poverty the next. The situation feels as desperate as it is lethal and there are few realistic political solutions on the horizon. Some say Islamic Jihad calculated that Israel wouldn’t go to war in the days leading up to the Eurovision Song Contest being held in Tel Aviv. So the moment was chosen to extract maximum concessions.”

Failing to mention the fact that the Palestinian Islamic Jihad is backed by Iran and choosing to ignore statements and threats made by its leader days before his report was broadcast, Bateman went on to tell listeners of ‘ominous’ warnings from Israel’s prime minister.

Bateman: “The Israeli prime minister Benjamin Netanyahu has warned ominously that Israel’s campaign is not over. Few can feel optimistic. Rafat Nasser, struggling to find work, told me he had taken out a mortgage to buy his apartment in Gaza. Now he no longer has a home but he still has the loan to repay. In Ashdod I asked Ephraim Cohen, in his wrecked apartment, whether the ceasefire would hold. ‘It will hold’ he told me. ‘It will hold when the messiah comes’.”

Tom Bateman’s main messaging in this report was obviously a false sense of equivalence between events in Israel and events in the Gaza Strip. That was achieved by the use of euphemisms such as “flare-ups” and avoiding the fact that all the recent rounds of conflict have been sparked by rocket attacks by terror groups in the Gaza Strip. In addition Bateman failed to adequately clarify to listeners that while Israel targets terror related sites in its response to rocket attacks, the Palestinian terrorists’ rocket attacks are aimed at civilian targets. Moreover, he failed to inform BBC audiences that while all four Israeli victims of the latest round of conflict were civilians, some 74% of those killed in the Gaza Strip were members of terror factions.