A public opinion poll contradicts a claim from the BBC's Jerusalem bureau.

Shortly after Binyamin Netanyahu returned the mandate to form a government to Israel’s president on the evening of October 21st, the BBC News website published a largely reasonable report headlined “Israel PM Netanyahu fails to form government ahead of deadline”. 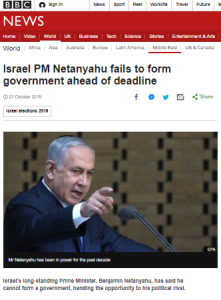 Readers of two versions of that report were however informed that: [emphasis added]

“BBC Middle East Correspondent Tom Bateman reports that Israel’s president has suggested a so-called unity coalition of the two main parties. That could see Mr Gantz as de facto prime minister, while Mr Netanyahu holds onto the position in name only.

But many in Israel believe a third election may be the only way to break the deadlock.”

“Mr Rivlin has suggested the two main parties form a national unity government. That arrangement could see Mr Gantz as de facto prime minister, while Mr Netanyahu holds onto the position in name only.

Many in Israel believe a third election may be the only way to break the deadlock.”

BBC audiences are not informed who “many in Israel” are or on what basis Tom Bateman deemed that unattributed – and highly questionable – speculation worthy of promotion.

As reported by the Times of Israel, a recent survey suggests that Bateman’s claim lacks factual basis.

“With politicians warning that yet another election could be on the horizon amid ongoing political deadlock, a television poll published Tuesday evening predicted that very little would change in the event of a third round of ballot-casting.

According to the Channel 13 survey, Benny Gantz’s centrist Blue and White would remain as the largest party if new elections were held, growing from 33 to 34 seats in the 120-member Knesset. Prime Minister Netanyahu’s right-wing Likud would also see a one seat bump, rising to 33 seats. […]

Overall, Likud and its religious allies would have 56 seats, the same number as the center-left and Arab parties would receive. Liberman would retain his status as kingmaker, holding the balance of power between the blocs.”

The introduction to the BBC’s editorial guidelines on accuracy states that:

“…all BBC output, as appropriate to its subject and nature, must be well sourced, based on sound evidence, and corroborated. We should be honest and open about what we don’t know and avoid unfounded speculation. Claims, allegations, material facts and other content that cannot be corroborated should normally be attributed.”

One seriously doubts that Tom Bateman met those basic requirements before promoting his inaccurate and misleading claim that a large number of Israelis believe that a third election could result in a significantly different outcome.