A Guardian article on a new Human Rights Watch report vilifying Israel didn't even feign objectivity or professionalism. In the 475 word piece by their Middle-East correspondent Michael Safim there isn't even one sentence quoting someone critical of the report - neither an Israeli official nor NGO Monitor.

A Guardian article on a new Human Rights Watch report vilifying Israel didn’t even feign objectivity or professionalism. In the 475 word piece by their Middle-East correspondent Michael Safi (“Israeli military law stifles Palestinian rights, watchdog says”, Dec. 17) there isn’t even one sentence quoting someone critical of the report – neither an Israeli official nor NGO Monitor.

The main thrust of the HRW report (based largely on research by long-time BDS activist Omar Shakir) is the claim that Israel relies on broad provisions of military law in order to ban peaceful associations by characterising them as ‘hostile organizations’”.

In fact, NGO Monitor published a response to the charge, refuting the HRW narrative on such ‘peaceful’ groups.  They pointed out that “HRW’s primary examples are individuals who are members of terror groups or closely linked to these groups and who’ve been convicted of incitement, terror financing and membership in terror organizations”, such as Hamas, Hezbollah, and the PFLP.

Here are NGOM’s examples of this whitewashing:

Hezbollah: HRW claims Hafez Omar was indicted primarily for “peaceful activities” and “the only charge of a non-peaceful nature” was throwing stones at soldiers. HRW quotes a Jerusalem Post article about the Al-Harak Al-Shababi (Movement of Youths), to which he belonged, which was banned by Israel  because it “acted under the instructions and funding of [the Lebanese party and military group] Hezbollah and Iran” (brackets added by HRW; emphasis added by NGO Monitor). Except, HRW deliberately ignores the crucial continuation of the article: “In the past two years, [two organizational operatives] transferred hundreds of thousands of shekels to promote the organization’s goals and fund terror activities” (emphasis added). Elsewhere in the article, we learn that Al-Harak Al-Shababi “acted under Hezbollah and Iranian instructions to carry out terrorist attacks against Israelis and set off a wave of violence targeting Israel and the Palestinian Authority” (emphasis added).

HRW refers to Hafez Omar as an “artist,” and according to the publication “His brother Mohammad told Human Rights Watch that Hafez designed posters on Palestinian rights issues, especially as they relate to prisoners, which he posted on Facebook.”  The link provided by HRW of Omar’s art includes posters promoting terrorist leaders and featuring the logos of terror groups and weapons. Some of the images also specifically refer to terror attacks that killed numerous Israelis.

HRW repeatedly describes Hezbollah as a “Lebanese Shi’ite Islamist group.” With regards to the Jerusalem Post article mentioned above, HRW inserts an extraneous description into a quote, which appears to be aimed at denying Israel’s insistence that Hezbollah is a terror group.

Hamas: HRW cites the case of Najwan Odeh, Qatar Charity’s “head of administration, [who] received an 18-month sentence for affiliation with an ‘unlawful association,’ namely with Qatar Charity, under the Defense (Emergency) Regulations of 1945, and a one-year prohibition on ‘commit[ing] the offense of which she was convicted,’ effectively a ban on returning to her job.” HRW blindly and without corroboration repeats her claim that “Qatar Charity’s money did not go to Hamas or the Hamas-led government in Gaza, but rather to administrative costs related to Qatar Charity’s office there and to private companies to carry out development projects.” However, a publicly available indictment of a senior Qatar Charity official describes how the charity provided funds to two banned organizations in Gaza, one of which has ties to Hamas.

PFLP: The PFLP is consistently labelled “a group that includes both a political party and an armed wing that has attacked Israeli soldiers and civilians”; this distinction regarding the PFLP is arbitrary and irrelevant, and is rejected by the US, EU, Canada, and Israel, which treat the PFLP in its entirety as a proscribed terrorist group.

Also of note, the Guardian article mentioned that the planned HRW press conference to launch the report in Amman was cancelled on Tuesday after Jordanian authorities failed to give the event approval.  However, what the Guardian journalist didn’t tell you is where HRW ended up holding the press conference. 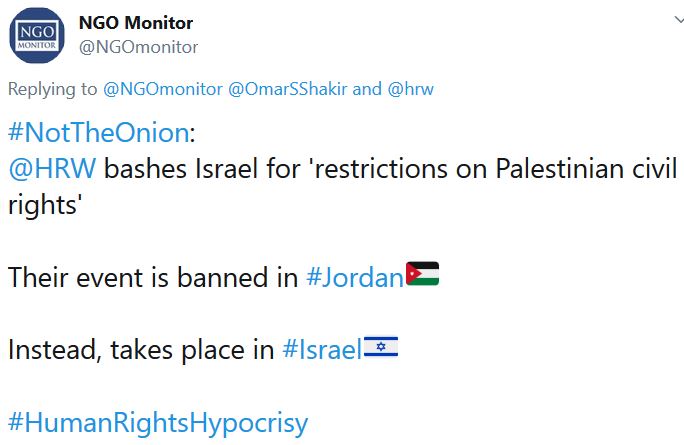 That’s right.  Authorities in Amman were less hospitable to a human rights group holding a press conference to promote a report highly critical of Israel than authorities in Jerusalem.