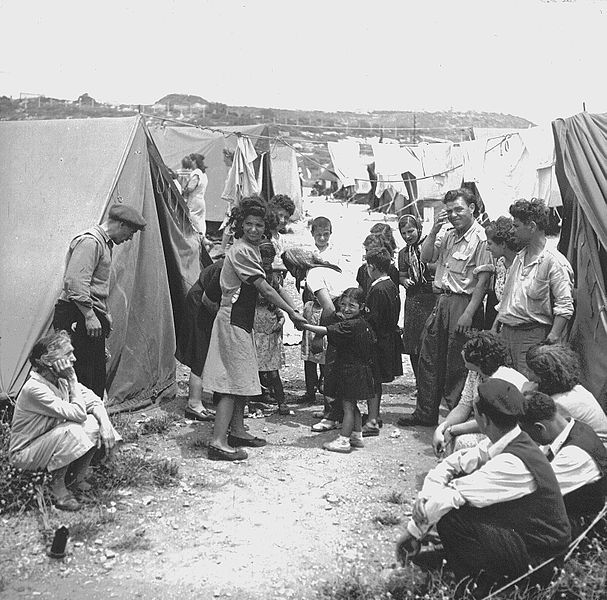 This is the fourth in a series of posts by CAMERA Arabic (part 1, part 2, part 3) showing how Arabic language news networks, including those affiliated with Western media outlets, frame the topic of Jews who originate from or live in the Middle East and North Africa, by attempting to distinguish between ‘loyal’ Jews and ‘treacherous’ Zionists.  (All translations, emphasis and in-bracket remarks are by CAMERA Arabic unless otherwise specified. Almost all links lead to English websites, unless no reliable translation was found.)

In previous posts we sought to reveal how some Arabic-speaking journalists and commentators frame the existence (or more commonly, lack thereof) of Jewish communities in Arab states. Through an analysis of three news items, originating in Egypt and Tunisia, we demonstrated that they approached this volatile topic in the following ways:

Of course, these can be considered neither acts of unbiased reporting nor attempts to honestly confront the conditions Middle Eastern Jews must face when residing in, or merely visiting, countries their families used to call home for hundreds (in some cases – thousands) of years.  More than anything, they reflect the journalists’ own resentment towards Israel and Zionism, as well as their need to express this animosity whenever Judaism is discussed, even absent an Israel angle.

But what happens when it’s no longer possible to deny the fact that modern Israel is where most of these Jews now live, and moreover, that Israel is the only country that has ever brought their story of dispossession and expulsion to the international stage? This particular case, as we’re about to see, called for a whole different level of misinformation and propagandistic language – of the kind that would fit a random online comment rather than a serious news report.

Throughout 2019, the Israeli government has been increasingly airing its demand that Arab states and Iran must compensate Jews who were forced out of them – as well as their descendants (partly as a counter-balance against Palestinian ‘refugees’ demands of compensation); the most recent development in this process occurred just last week.

Last January, upon learning that Israel has assembled a team of lawyers to estimate the total value of property lost by Jews who immigrated their from across the Middle East and North Africa, Sky News Arabia – a joint venture between the UK-based Sky News and the UAE-based Abu Dhabi Media Investment Corp. – published the following report (all translations, emphases and in-bracket remarks are by CAMERA Arabic):

“As usual, Israel demands rights it neither deserves nor grants. Here it is today, aspiring to obtain enormous amounts of money from Arab states as compensation for the Jews who emigrated thence long ago. However, it [Israel] does not recognize its own role in this displacement, to wit “intimidation [and] encouragement” operations carried out by officials in its intelligence service (the Mossad), in order to force the Jews of the Middle East to depart to their “new state”.

“Quoting Israeli television [programme] ‘HaHadashot’, American website Bloomberg has reported that the Israeli government seeks to obtain an estimated 250 billion dollars as a compensation for the property which the Jews left behind after they fled Arab and Middle Eastern states and immigrated to Tel Aviv [sic].

“The report indicated that Israel had hired an international accounting company, [whose name] it won’t disclose, to estimate the damages that the Jews had suffered prior [sic] to the establishment of their state.

“By this move, Israel pretends to forget that it itself was a reason for the Arab Jews’ displacement from their [native] states to the nascent state [of Israel. This occurred] under the pretense of ‘eradication’ and ‘extermination’ which the founders of the Jewish state had hyperbolicallyy evoked when discussing [the topic].

“Israel carried out several operations to force the Jews in the Arab states to immigrate to it. One of the most famous was [Operation] ‘Ezra and Nehemia’, which drove Iraq’s Jews to seek asylum by orchestrating bombing attacks targeting Jewish synagogues, [as well as] stores and cafes which Iraqi Jews either owned or frequented.

“Then it spread rumors throughout [Iraq] in order to incite Jewish panic, eventually forcing one hundred and twenty-three thousand Iraqi Jews to immigrate to Israel in 1951.

“In Yemen, meanwhile, Mossad agents sowed strife and unrest that ensured the success of the ‘Magic Carpet’ mission, thanks to which the transfer of fifty thousand Yemenite Jews to Israel was carried out throughout 1950.

“The situation wasn’t very different in Egypt, where rumors that the then president Gamal ‘Abd an-Nasser was an anti-Semite and forced the Jews to emigrate are still widespread. [In truth,] bombing attacks targeting Jewish businesses [in addition to] lurid and intimidating rumors played a role in driving the Jews of Egypt to move out. This culminated with the 1956 tripartite aggression against Egypt [i.e. the Suez crisis].”

Regardless of the unprofessional, editorialising and, at times, hysterical tone that characterises the Sky Arabia report (“As usual”, “neither deserves nor grants”, “pretends to forget”, “Israeli plans of terrorization”), the factual basis of the “cross countries Mossad operations forcing Jews to flee to Israel” hypothesis is dubious at best:

There was nothing clandestine or violent in ‘Ezra and Nehemia’ as the report suggests. Rather, it is simply the official Israeli name given to the governmental operations which facilitated the immigration of between 120 and 130 thousand Iraqi Jews to Israel, regardless of the circumstances that inspired the exodus.

Regarding the series of attacks against Iraqi Jewish targets, all carried out in Baghdad between April 1950 and June 1951, their perpetrators and their influence on the Jews’ exodus, all are a matter of a heated historical debate to this day. Apart of the usual “Israel did it” allegation, always a classic of Arab mainstream propaganda that has recently been promoted by “critical theorists” and “new historians”, other more probable suspects have been floated, either by interested parties or scholars. Among the suspects are Iraqi nationalists (based on the only recorded admission of two perceived culprits ever made), Muslim Brotherhood Islamists, as well as local Jews who – albeit members of the Zionist underground – were operating outside Israeli directives.

Allegedly, the Iraqi Zionists initiated several attacks after the only fatal attack, the Messouda Shemtob synagogue bombing of January 1951, was already carried out (they were certain that the synagogue attack was the work of the Muslim Brotherhood). This was done to prove the innocence of their fellow underground members, arrested by the Iraqi authorities shortly after the synagogue bombing. At that point most Iraqi Jews were already registered for emigration, so Israel didn’t even have an interest in rushing them out of Iraq.

Moreover, two independent commissions found no connection between Israeli intelligence and the events: the first secretly assembled in 1960 by David Ben Gurion’s instructions; the second openly convened as a part of a libel lawsuit filed in 1977 by a former intelligence agent against an Israeli journalist. Eventually, the trial concluded in 1981 with the journalist apologising and retracting his accusations as a part of a settlement.

Currently, the theory about Israeli involvement in the bombings relies heavily on quite oblique pieces of evidence, none of which can be considered substantial:

In conclusion, to unconditionally assign responsibility for the attacks to the Israeli government, as Sky News Arabia did, reflects absolutely no fact checking on the reporter’s behalf.

The first intelligence-related Israeli operations in Yemen date back to the mid-1960s, when Israel sought to interrupt the Egyptian intervention in the Yemenite civil war by providing weapons and funding to the side who fought the Egyptians. This happened more than a decade after Operation On Wings of Eagles (“Magic Carpet”), which was completed in 1950 – notably, before the Mossad even existed as an intelligence agency that was permitted to operate independently outside Israel.

Admittedly, some researches suggest that Israel, not oblivious to the humanitarian crisis some Yemenite Jews were facing, secretly colluded with Yemen’s monarch, influencing his decision in favor of allowing Jews wishing to depart his kingdom to do so. However, this can’t possibly be considered a conspiracy of Israeli intelligence agents to “sow strife and unrest” in Yemen. All the more absurd is the suggestion that the political turmoil, economic difficulties and antisemitic hostilities of the late 1940s – generally perceived as the immediate factors which drove the Jews of the Kingdom of Yemen and the Aden British Protectorate to leave for Israel – are a part of such a conspiracy. This has no historical basis whatsoever.

The identities of most of the 1950-1951 Iraq bombing perpetrators are still unknown. In contrast, an examination of the Egyptian case leaves little doubt that those who orchestrated what the Sky report referred to as “bombing attacks targeting Jewish businesses” – a series of deadly attacks which targeted Jews in Cairo in 1948 – belonged to ranks of the Muslim Brotherhood, agitated by Egypt’s losing war effort against Israel. Not a single English or Hebrew source seriously debates the possibility that Israel, still waging its War of Independence at the time of attacks, would divert its limited resources to engage in such an operation, killing dozens of Egyptian Jews in the process. Additionally, it is unclear why the Sky report mentioned the attacks in the context of Gamal ‘Abd an-Nasser’s rule, since he led the military coup against King Farouq only in 1952.

As for Nasser, his direct responsibility for the many thousands of Jews forced out of Egypt during the 1950s and 1960s is undeniable. Furthermore, while Nasser himself publicly rejected the “anti-Semite” label and insisted that he opposed Zionism alone, in practice his official policies and propaganda did next to nothing to distinguish the two. In other words, even if Nasser himself wasn’t openly anti-Semitic, his regime definitely was.

What was the contribution of Israeli policy to the Egyptian decision-making process that produced the mass persecution of local Jews? Indeed, the 1954 espionage affair and 1956 Suez crisis, to which Israel was responsible, has considerably worsened the relations between the Jews of Egypt on the one hand and the Egyptian government and Muslim majority on the other.

However, these Israeli moves never intended to encourage Jewish immigration: the Lavon affair attacks were conceived as false flag, and Operation Musketeer/Sinai Campaign of 1956 had strategic objectives that went far beyond the concerns of Egypt’s small Jewish minority. It is also debatable to what extent local Jews would be persecuted had Egypt not been in a conflict with Israel. Judging by the fate of Egypt’s Greeks, Copts, Armenians, Italians and Levantine Christians under Nasser’s nationalist regime, all ethnic and religious minorities who lived in the country for generations and were never involved politically with a foreign power hostile to Egypt, it seems very likely that Jews would have been targeted nonetheless, in one way or another.

Once again we’re amazed at how most Arabic-speaking media outlets, purporting to present themselves as “Western” via their brand names, engage in the same kind of baseless, hateful propaganda that (non-Western) Middle Eastern media channels have perfected, often at the order of their local governments.

Specifically, the fabricated story about Mossad agents intimidating Mizrahi Jews into emigration out of their Arab homelands is nothing more than the other side of the “Jewish-Muslim pre-Zionism harmony” myth – a rhetorical stunt aimed at absolving Arab and Middle Eastern states and peoples of responsibility for what they did to peaceful Jewish minorities who once lived amongst them.