Why does the BBC continue to promote a map which does not reflect reality?

The article includes a map which was previously seen in a BBC report published last November. As noted here at the time, that illustration informs readers that “changes agreed” under the JCPOA included Fordo being “converted from fuel enrichment to technology centre”. 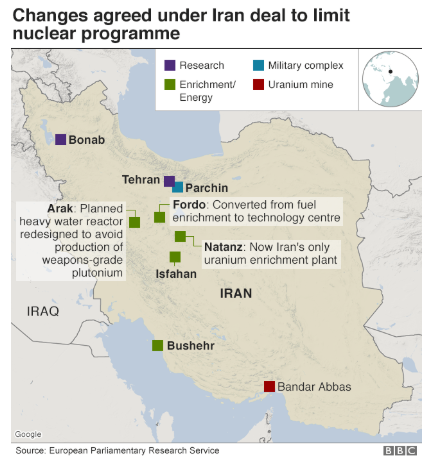 Iran did not comply with that requirement (as documented in this report) but nevertheless the BBC continues to promote a map which tells audiences of “changes agreed” but does not provide any information concerning the reality of Iranian compliance with those agreements.

A report published by the Institute for Science and International Security in November states:

“Iran has rendered defunct the JCPOA’s provision that the Fordow plant be converted to a nuclear, physics, and technology research center. Instead, as we warned in our previous analysis, Iran retained its enrichment plant at Fordow four years into the JCPOA’s implementation. [Iran’s Atomic Energy Organization (AEOI) spokesman, Behrouz] Kamalvandi recently emphasized that reality, stating on November 9, “In fact, we can say that we have abandoned a number of clauses of the JCPOA, including the 44th, which stipulates that Fordow should be transformed into an international nuclear and physical center.””

One must therefore ask why the BBC continues to use a map which does not reflect the situation on the ground and hence misleads audiences.