We're not arguing that peace isn't possible, nor that, over time, such regressive Palestinian views couldn't change.  But, the polling does clearly indicate - at least to those who genuinely care about "what Palestinians think" - that Palestinian attitudes, as they exist today, represent a major impediment to a peaceful solution to the conflict.

A Feb 2nd Guardian op-ed on the new US peace proposal by Diana Buttu, former legal advisor for the PA negotiating team, was predictably loaded with anti-Israel vitriol, smears, half-truths and outright lies about Israel and the history of the peace process.

However, she did, quite inadvertently, get one thing right in the headline:

Whilst this headline is inspired by a passage in the op-ed arguing that, for Donald Trump, what Palestinians think doesn’t matter, these words can be taken another way – one that Buttu clearly didn’t intend, but which accurately reflects the truth, at least insofar as media coverage is concerned.  What we’re referring to is a dynamic eloquently expressed by former AP Jerusalem correspondent Matti Friedman in his essay at Tablet (“An Insider’s Guide to the Most Important Story on Earth”, Aug. 26, 2014).

A reporter working in the international press corps here understands quickly that what is important in the Israel-Palestinian story is Israel. If you follow mainstream coverage, you will find nearly no real analysis of Palestinian society or ideologies, profiles of armed Palestinian groups, or investigation of Palestinian government. Palestinians are not taken seriously as agents of their own fate. The West has decided that Palestinians should want a state alongside Israel, so that opinion is attributed to them as fact, though anyone who has spent time with actual Palestinians understands that things are (understandably, in my opinion) more complicated. Who they are and what they want is not important: The story mandates that they exist as passive victims of the party that matters.

Freidman’s point resonates in the context of British media coverage of the US proposal, and, of course, Buttu’s op-ed in particular.  The question we posed in a previous post, ‘what can Palestinian leaders do now to advance peace, regardless of their disagreement with the Trump plan?’, has not really been asked by media outlets we’ve monitored since the Jan. 28th announcement in Washington.  Indeed, we have consistently argued that perhaps the most egregious pattern of media bias demonstrated by journalists covering the region involves their failure to impute agency to Palestinians, framing them as merely victims.

Buttu’s Guardian column continues in this pattern. In a more than 1000 word piece, she fails to devote even a sentence to addressing the question of what Palestinian leaders can or should do now to advance peace, or what kind of counter-proposal they should make to advance talks.  Her entire op-ed is a diatribe condemning the Trump proposal, and US, and Israeli actions in general.  Further, Butto doesn’t provide a glimpse into her own views on how to advance peace.

Of course, Buttu, and the Palestinian leadership, likely don’t want you know what they think, as it completely contradicts the desired narrative.

Further, a plurality of Palestinians, in a Pew study in 2016, chose “armed resistance” when asked how they should achieve statehood. 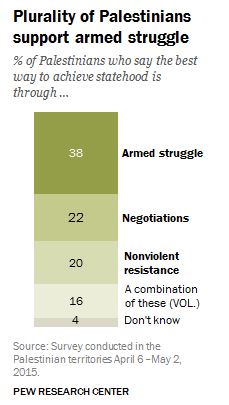 This doesn’t mean that peace isn’t possible, nor that, over time, such regressive views couldn’t change.  But, it does clearly indicate – at least to those who genuinely care about “what Palestinians think” – that Palestinian attitudes, as they are today, represent a serious obstacle to a peaceful solution to the conflict.