Radio 4 dedicates two weeks of radio broadcasts to a novel with a tidy narrative about peace.

This week BBC Radio 4 has been airing a serialised reading of a book published on February 25th in ten episodes which will continue next week. The synopsis to the first episode describes the novel as follows:

Bassam and Rami inhabit a world of conflict that colours every aspect of their daily lives, from the roads they are allowed to drive on, to the schools their daughters, Abir and Smadar, each attend, to the checkpoints, both physical and emotional, they must negotiate. Their worlds shift irreparably after ten-year-old Abir is killed by a rubber bullet and thirteen-year-old Smadar becomes the victim of suicide bombers. When Bassam and Rami learn of each other’s stories, they recognise the loss that connects them and attempt to use their grief as a weapon for peace.

In Apeirogon – named for a shape with a countably infinite number of sides – Colum McCann creates an epic novel inspired by the real experiences of Palestinian Bassam Aramin and Israeli Rami Elhanan who, after each losing a child, came together to promote peace.”

Media interviews are of course a significant part of the marketing of any new novel and McCann gave a lengthy interview (from 00:18 here) to BBC Radio 4’s ‘Open Book’ – presented by Mariella Frostrup – on February 23rd. 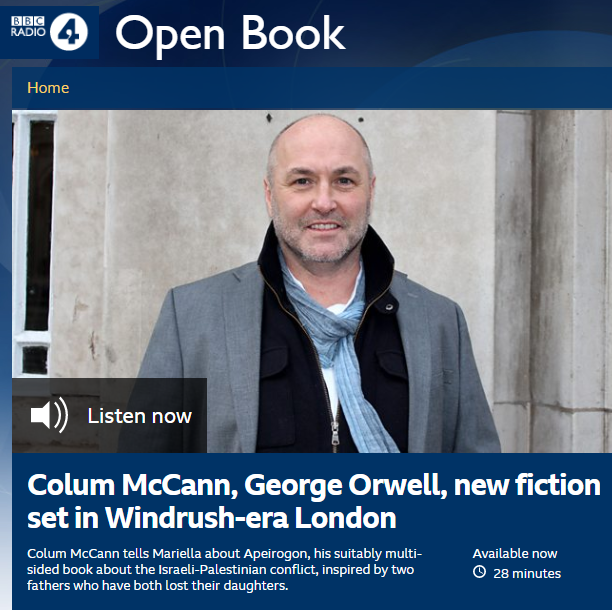 “Colum McCann tells Mariella about Apeirogon, his suitably multi-sided book about the Israeli-Palestinian conflict, inspired by two fathers who have both lost their daughters. A soaring mixture of reportage, mythology, poetry and ornithology, among many other things, McCann makes the case for it as a “novel” with a universal message.”

Near the beginning of the interview Frostrup tells listeners that:

“The two bereaved fathers came together through an organisation called Combatants for Peace, their experiences having made them less certain about the polarised world views they once both held in youth.”

Listeners are however told nothing about the agenda of that political NGO or the organisation with which the two men are currently associated.

In other interviews McCann has stated that before he spent a week in Israel and the Palestinian controlled territories in 2015 he was “completely ignorant of what was going on there” and at 11:29 listeners hear a little about his learning process, which apparently included consultation with “one of my great heroes” the political activist Raja Shehadeh and reading Mahmoud Darwish.

Perhaps the most revealing part of the interview concerns McCann’s view – exaggerated in the opinion of this reviewer – of the importance of the conflict between Israel and the Palestinians.

“I think it is one of the central questions as to who we are and where we are and I think we all identify with it in some way, in a way that’s different to other conflicts. There’s something about Jerusalem, there’s something about that being the birthplace of so many things that we’re drawn to and confused by and we’re wondering why all this is happening.”

The Guardian’s review of the novel states:

“For all its grief, Apeirogon is a novel that buoys the heart. The friendship of Bassam and Rami is a thing of great and sustaining beauty. There’s a picture of the two of them, asleep together on a train in Germany, travelling from one speaking engagement to the next. They lean against each another, Rami – the older man – supporting the smaller Bassam as he sleeps. This, the novel suggests, is the solution to the conflict: something as simple and easy as friendship, as the acknowledgement of a shared experience, as love.” [emphasis added]

The reassuring notion that “something as simple as friendship” and “love” are the solution to the conflict of course avoids the basic fact that Smadar Elhanan was murdered – along with two other teenage girls who are not mentioned in this programme – by Hamas suicide bombers in an attack intended to kill human beings simply because of their Israeli identity.

The reduction of the Israeli-Palestinian conflict to the tidy and appealing narrative promoted in McCann’s book perhaps explains why the BBC – itself no stranger to the promotion of simplistic narratives concerning that issue – decided to dedicate two weeks of radio broadcasts to a novel which frames that conflict in terms far more palatable and comfortable to its audiences than actually exist.