Following the election in Israel at the beginning of March we documented the BBC’s provision of brief descriptions of various competing parties’ locations on the political map, with the exception of one list.

As efforts to form a coalition government proceed, that practice continues.

Listeners to a news bulletin aired on BBC Radio 4’s ‘Today’ programme on March 16th heard a report from Tom Bateman (from 2:09:05 here) about the president of Israel having tasked the leader of the Blue & White party with forming a government after he received the most endorsements from members of the Knesset.

Newsreader: “Benny Gantz, the main political rival to the Israeli prime minister Benjamin Netanyahu, has been given the chance to form a government after winning the support of two key parties. There have been three inconclusive elections in Israel in the last 12 months. Here’s our Middle East correspondent Tom Bateman.”

Bateman: “The backing for Benny Gantz is a blow to Benjamin Netanyahu but it does little to break the deadlock that has paralysed Israeli politics. Most MPs supported Mr Gantz for the first go at putting together a coalition but their appetite to dislodge Mr Netanyahu is all some of them really agree on. The groups backing Mr Gantz include the Arab Israeli parties who won record support in the election and a nationalist, hawkish former defence minister who turned on Mr Netanyahu a year ago. The under pressure prime minister is seeking, among other options, to forge an emergency government to deal with the Coronavirus outbreak.”

In other words, while BBC audiences heard Avigdor Lieberman – leader of the Yisrael Beitenu party – described as “nationalist, hawkish”, no political categorisation was given for the Joint Arab List.

A written report on the same story appeared on the BBC News website’s ‘Middle East’ page on March 16th under the headline “Israel election: Gantz vows to form ‘broad’ unity government within days” and with the tag “Coronavirus pandemic”. There readers found the following: 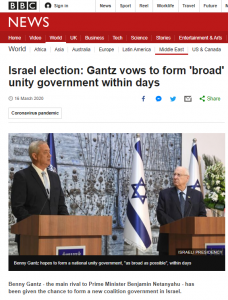 “The election on 2 March was Israel’s third in less than a year. Neither of the main party leaders was able to command a majority following the last two rounds.

This time, Likud won 36 seats, and allied right-wing and religious parties another 22. But that left Mr Netanyahu three short of a majority in the 120-seat Knesset.

Once again we see that while the BBC apparently thinks it useful to provide audiences with tools to navigate the Israeli political map, it does not provide any such signposting regarding the Joint Arab List. Instead, that list is portrayed as “representing Israel’s Arab minority” – the 16% of the Israeli electorate that the BBC inevitably chooses to portray as one monochrome group.

Information about the politics and ideologies of the four parties that make up the Joint Arab List is however crucial for members of the BBC’s audience who wish to understand both this story about Gantz trying to form a coalition government and another alternative apparently on the table but not adequately explained by the BBC – an emergency government. As Haviv Retting Gur notes at the Times of Israel:

“The Arab factions united in the Joint List are a diverse collection of liberals, Islamists, progressives and ultra-nationalists. Most are openly anti-Zionist and some have expressed proud and open support for ruthless terrorists responsible for some of the most infamous atrocities ever inflicted on Israelis. […]

One signal of a political faction’s seriousness can be found in its willingness to soberly prioritize its many goals and to sacrifice less-important ones for those that matter more. That may sound obvious, but a party like Balad, one of the four factions that make up the Joint List, had proved over the years that it could not look past its obeisance to radical Palestinian nationalism. Its members have joined the 2010 Turkish flotilla to Gaza, praised a murderer of Israeli children, and even spied for the Lebanese terror group Hezbollah.”

So while the BBC is capable of identifying “religious” parties allied to the Likud and describes Yisrael Beitenu as “nationalist”, it refrains from informing its audiences that, for example, one of the parties making up the Joint Arab List (Ra’am) is also a religious group and another (Balad) is no less nationalist.

Another point worthy of note in this BBC report concerns the following statements:

“Meanwhile, Mr Gantz also criticised what he said were “the illegitimate efforts by the current prime minister to evade justice”.

Mr Netanyahu had been due in court on Tuesday to face charges of bribery, fraud and breach of trust in connection with three separate cases. But the hearing has now been postponed until at least 24 May because of the Covid-19 outbreak.”

Readers trying to make up their own minds about that statement from Gantz would have benefited from the knowledge that the court session originally scheduled for March 17th was postponed by the judges assigned to the case.