Readers may recall that in September 2020 multi-platform promotion was given to various versions of “an investigation by BBC News Arabic”.

A filmed report appeared on the BBC News website on September 21st 2020 under the headline “The settlers’ billionaire backer” and with the title “Israeli settlers’ Chelsea boss backer”. Visitors to the BBC Arabic website found a version of the same film which is three times longer than the one originally promoted on the English language website, together with a written report on the same story. An English language version of the longer film also exists (and was later also posted on the BBC news website) and the topic was the subject of an audio report by BBC Arabic’s Murad Shishani aired on the September 21st 2020 edition of the BBC World Service radio programme ‘Newshour’.

Those various versions of the report were discussed here:

“An investigation by BBC News Arabic has found that Russian oligarch, Roman Abramovich, controls companies that have donated $100m to an Israeli settler organisation.

Elad operates in occupied East Jerusalem. By allowing settlement activity in the area Israel is considered to be in breach of international law. Israel disputes this view.

Analysis of the bank documents leaked to Buzzfeed News who shared them with the International Consortium of Investigative Journalists and the BBC has revealed that Chelsea football club owner, Abramovich, is the biggest single donor to the organisation. Elad also runs the City of David and other archaeological sites, visited by a million tourists each year in Jerusalem. There are arguments that Israel is breaking international law by allowing exploratory archaeological digs to be carried out in occupied land.” 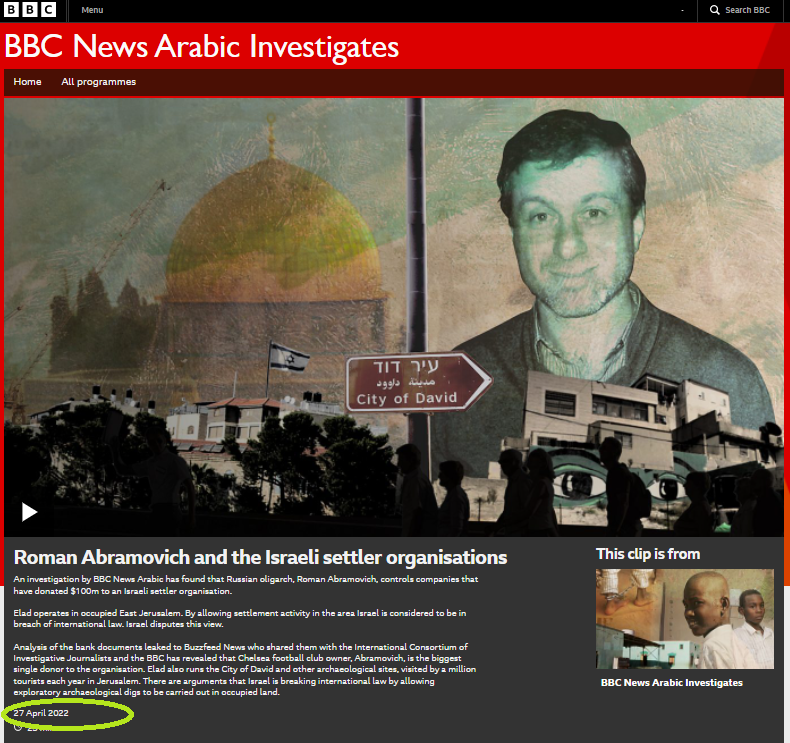 The report has not been updated to avoid anachronisms such as the description of David Friedman as the US ambassador to Israel or the closing statement that “the Supreme Court in Israel has said it will hear the Sumarin family’s appeal in April 2021”. Neither have any of its many problematic aspects been addressed.

Since the original appearance of this filmed report, the BBC has continued to promote a cross-platform uniformly one-sided narrative on the topic of Silwan.

ANOTHER CHAPTER IN BBC CAMPAIGNING ON SILWAN

The recycling of this BBC Arabic ‘investigation’ clearly in no way contributes to providing BBC audiences with much needed accurate and impartial information on that topic and others.