Previously we noted that reports on BBC radio and the BBC News website relating to cell phone tracking of Coronavirus carriers in Israel had in all cases failed to inform audiences of the parliamentary and legal oversights of that step taken by the government but did choose to  amplify the claims of political NGOs.

Earlier this month we documented a BBC News website report’s unsatisfactory portrayal of the postponement of Binyamin Netanyahu’s court case.

“Readers […] would have benefited from the knowledge that the court session originally scheduled for March 17th was postponed by the judges assigned to the case.” 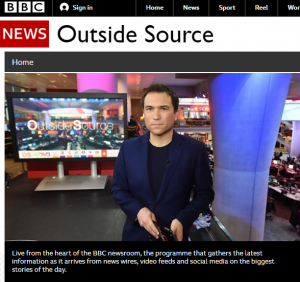 Both those topics came up again in the March 30th edition of the BBC News Channel programme ‘Outside Source’.

Following an item concerning steps taken by the Hungarian parliament, presenter Kasia Madera told viewers (from 14:13 in the video below):

Madera: “But Hungary’s government is not the only one in fact to increase its powers during the outbreak of Covid 19. We are in fact seeing stronger measures being implemented around the world.”

Having told audiences of media censorship, curfews and deployment of the military in Thailand, she went on:

Madera: “While compare that to Israel. Prime Minister Benjamin Netanyahu there saying that…who was…he was set to stand trial on corruption allegations but in fact now he’s shut down the courts. He’s also permitted the tracking of Israeli citizens’ phones and the prime minister says that the move will help track individuals who’ve come into contact those who contract Covid 19 but critics argue that this could lead to a Big Brother-style society.” [emphasis added]

Once again the BBC failed to inform its audiences that the surveillance measures are in place for a period of 30 days, that there is a Knesset sub-committee overseeing them and that the High Court has conditioned the measures on legislation. Moreover, while failing to provide that highly relevant information, the BBC once again amplified the therefore context-free claims of “critics”.

As for the claim that the Israeli prime minister – and he alone – “shut down the courts”: it was in fact the Justice Minister who cut back the activity of the courts on March 15th.

“Justice Minister Amir Ohana declared a 24-hour “state of emergency” in Israel’s court system early Sunday morning, “as part of the national effort to prevent the spread of the coronavirus.”

The decision means that courts can only sit for urgent hearings on arrest and remand orders, administrative detention orders, offenses under legislation “relating to the special emergency” and certain interim relief in civil matters.”

On March 21st the Supreme Court Justice Esther Hayut published a press release in which she clarified that the courts continue to function throughout the country, providing essential services to the public. Her statement emphasized that the courts are not closed and that they would continue to provide services while observing the emergency restrictions issued by the Ministry of Health. She clarified that any current – and, if necessary, future – reduction in the activity of the courts due to the Corona pandemic was in accordance with her decisions as President of the Supreme Court.

In other words, the BBC’s claim that Netanyahu has “shut down the courts” is completely inaccurate and misleading to BBC audiences.

That failure to adhere to BBC editorial guidelines on accuracy would of course be egregious at any time but it is all the more reprehensible at a time when the BBC is promoting itself as the ‘trusted’ antidote to Fake News concerning the Covid 19 pandemic.