On March 30th the BBC announced that:

“Some of BBC News’ best-known voices are reading their favourite poems of comfort and hope as part of a series on Radio 4’s Today programme.”

On April 3rd it was the turn of the BBC’s Middle East editor Jeremy Bowen (from 2:28:42 here) and, as he himself Tweeted, he used that opportunity to bring up the Gaza Strip. 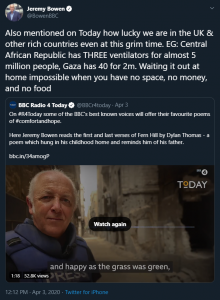 Bowen: “And, you know, I’m going to be as cheerful as possible because this is a very hard time and is miserable for so many and people are dying. But you know we’re gonna get through it. Ahm…there have been some comparisons made with this fight against the virus and a war and I think that’s valid, without the bullets. Now a reason why this is so shocking is because usually in this country and in most other developed countries we have pretty secure – most of us – and stable lives and in wars that mass security gets taken away. I’ve seen it all over the world many times and that’s what the virus is doing. Now it’s not a competition of course but many people around the world never have that kind of safety and security that usually we’re used to. Untimely death is always part of it for them. And so think about all that and the fact that, you know, we have the NHS and many countries don’t and figures I’ve seen lately: 40 ventilators in Gaza for 2 million people, 3 ventilators in the Central African Republic for 5 million. So it’s a time to count our blessings I suppose is what I’m saying.” [emphasis in italics in the original]

As of the day on which those statements by Bowen were aired, over 3,600 people had died of Covid 19 in the UK. In the Gaza Strip there had been no fatalities.

On March 13th and 14th listeners to BBC Radio 4 and BBC World Service radio were told by a World Health Organisation representative that there are “between 50 to 60 ventilators” in the Gaza Strip.

On March 25th BBC Radio 4 listeners were informed by a doctor in the Gaza Strip that “throughout Gaza we have 63 ICU beds fully equipped with ventilators and respirators and the health professionals to serve on these units”.

On March 26th listeners to BBC World Service radio heard the UNRWA director in the Gaza Strip say “what I’ve been told is we have at maximum 60 ICU beds”.

On March 31st listeners to the same radio station heard from an Oxfam representative that “the number of ICU beds are hardly 87 if we count the private and the public hospitals”.

So with the BBC having reported for weeks that there are between 50 and 87 ventilators in the Gaza Strip (the head of the regional WHO mission says 87 – i.e. 43.5/million people), where did Bowen get the considerably lower number of 40? That is unclear because he refrained from providing a source for the claim he promoted on prime-time BBC radio.

In mid-March it was reported that NHS Scotland had about 190 “Level 3 Intensive Care Unit beds with ventilatory support in addition to other organ support” for that country’s population of 5.5 million – i.e. 34.5/million. While efforts have been made to improve that ratio, ITV reports that in the Hebrides, where three cases of Coronavirus have been diagnosed:

“There are no Intensive Care Unit (ICU) beds with ventilators on the islands, it’s a long, long way to the nearest hospital, and any medical evacuation to the mainland could be weather-dependent.”

Nevertheless, Jeremy Bowen thought it appropriate to promote his unsupported chosen political narrative while telling the BBC’s domestic audiences to count their blessings.