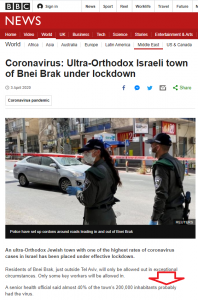 Readers of the report were told that:

“A senior health official said almost 40% of the town’s 200,000 inhabitants probably had the virus.”

“Bnei Brak is only second to the much larger city of Jerusalem in terms of the total number of coronavirus cases.

On Thursday, the head of a health service used by about half the population of Bnei Brak said about 38% of residents were likely to have the virus, and that there were probably tens of thousands of cases which had not been officially confirmed.”

That health service is called Maccabi and – as reported by the Times of Israel – the BBC’s portrayal of its CEO’s statement is inaccurate.

“Bnei Brak has become widely known as the city where one in three people has coronavirus, but the medical experts behind the figure say it is based on a misunderstanding.

Ido Hadari, senior executive director at Maccabi Healthcare Services, told The Times of Israel on Sunday that his organization actually has “no idea” how many Bnei Brak residents have coronavirus, despite it having become the source for the figure that is being discussed across media and social media. […]

Ran Saar, CEO of Maccabi, the HMO [health maintenance organization] for one in two Bnei Brak residents, was widely quoted on Thursday [April 2nd] telling a Knesset committee that 38 percent of people in the city are infected with coronavirus. But Hadari said that Saar wasn’t giving numbers for the general population of the ultra-Orthodox city, but rather discussing a very different statistic: what percentage of people there who felt unwell and went for a test in recent days actually had coronavirus.”

The Times of Israel also notes that the day before the BBC published its article, Ha’aretz had already reported that:

“…the Health Ministry had revised the numbers with Maccabi and discovered that the figure was erroneous.

While indeed some 35% of the virus tests in Bnei Brak had been positive, those who were tested had mostly been people with symptoms of the illness, and cannot be seen as a representative sample of the city’s population.

Therefore, the report said, while the true number of virus patients in Bnei Brak was significantly higher than in most of the country, it was likely far from the one cited by Saar, and could be ten times lower.”

In other words, by the time the BBC News website published this report, the statements it attributes to the CEO of Maccabi had been shown to be inaccurate but the BBC published them nevertheless.

BBC Watch has contacted the corporation on this issue.