The lead item on the BBC News website’s ‘Middle East’ page on the morning of April 7th was a filmed  report titled “Coronavirus: ‘Gaza has no resources to fight this virus’”. 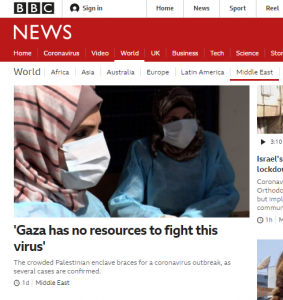 “In Gaza, people are bracing for a coronavirus outbreak as more than 10 cases of infection have been confirmed in the small enclave.

Everything is shut, including vital food aid centres, and people are being asked to stay at home.”

The declaration the BBC chose to promote so prominently in the report’s headline and on its website in fact comes from one of the interviewees who is only identified by her ‘kunya’ teknonym. BBC audiences are not informed of her real identity or her qualification to make such a pronouncement – other than “Palestinian refugee”.

That video is based on a filmed report which was aired on April 6th in the BBC News Channel’s “BBC News Special Coronavirus Daily Update”. Presenter Clive Myrie introduced the item (from 1:57:50 in the video below) as follows: [emphasis in italics in the original, emphasis in bold added]

Myrie: “In Gaza people are bracing for a Coronavirus outbreak with 12 cases confirmed so far. Everything is shut including vital food aid centres and people are being asked to stay at home. The health system in the Strip, which is home to nearly 2 million people, has been shattered by an Israeli blockade lasting more than a decade.”

While 12 cases had indeed been confirmed in the Gaza Strip as of the date of this broadcast, six had already recovered. Although UNRWA did close its food distribution centres in late March as a precautionary measure, it soon began delivering food to the homes of its clients. As we have all too often had cause to note here in the past, the state of healthcare in the Gaza Strip is not attributable to Israeli – and Egyptian – counter-terrorism measures but to the financial priorities of the ruling Hamas terror organisation and the rift between it and the Palestinian Authority which is responsible for health services in the Gaza Strip.

In other words, not one line of Myrie’s three-sentence introduction gave BBC viewers an accurate portrayal of the situation in the Gaza Strip.

The report began with the inaccurate claim that residents of the Gaza Strip live under “lockdown and isolation” – a claim which is especially interesting given that the BBC knows that the first two people in the territory diagnosed with Covid 19 had just returned from abroad.

Reporter: “There is a place where lockdown and isolation are the norm. But never before with a deadly pandemic. Gaza, a small enclave of nearly 2 million people, is bracing for an outbreak of Coronavirus. And people here know that they are far from ready for it.”

Later on viewers were once again fed the myth that the state of healthcare in the Gaza Strip is attributable to Israel’s counter-terrorism measures but with no mention of the terrorism that brought them about.

Reporter: “The World Health Organisation’s medics are warning of a catastrophe if Gaza sees wide spread of the virus. The health system is just too fragile after nearly 14 years [sic- actually since 2007] of blockade and cross-border conflict with Israel. One group, Physicians for Human Rights in Israel, warns that Gaza has only about 70 ICU beds, some of which are already occupied. A drop in the ocean of what people here would need.”

Viewers were told nothing about the agenda of the political NGO which issued the statement quoted by the BBC reporter.

Although UNRWA had already begun distribution of food aid to the homes of those classed as refugees several days prior to the broadcast of this report, viewers were once again given a false impression of the situation.

Reporter: “The pandemic has already taken its toll on other basic aspects of life in Gaza like food aid. The UN’s Palestinian refugee agency UNRWA has closed aid centres for fear of potential outbreak.”

The report closed with a reference to a “siege” which does not exist and never has.

Reporter: “People here like Um Shadi normally take it one day at a time, with worries of war, siege and dire poverty. Now a deadly pandemic that’s sneaked into their lives will add to their many woes.”

Since the onset of the Coronavirus pandemic the BBC has produced numerous reports about the Gaza Strip (see ‘related articles’ below) which, like this latest one, have all erased the issue of Hamas’ terrorism and mismanagement of the territory it seized in a violent coup thirteen years ago. Many of those reports have directly or indirectly blamed Israel for the state of healthcare in the Gaza Strip while failing to inform audiences of the real background to the situation. Most of those reports have completely ignored the topic of Israeli coordination of the entry of supplies – medical and other – to the territory.

It is embarrassingly obvious that the BBC is far more interested in using the pandemic to promote simplistic narratives and agendas it embraced years ago rather than in providing its audiences with accurate and impartial information about a part of the world which, fortunately, is to date not one of the locations most badly affected by the Coronavirus.