Listeners to the BBC Radio 4 programme ‘The World Tonight’ on May 14th heard an item (from 36:51 here) concerning the postponement of the swearing-in of Israel’s new unity government which was supposed to take place that evening.

Presenter Razia Iqbal interviewed Israeli journalist Noga Tarnopolsky and towards the end of the item (from 39:58) listeners heard the following: [emphasis added]

Iqbal: “And just briefly…err…what will that all mean for the plans to annex part of the occupied West Bank as early as the 1st of July?”

Tarnopolsky: “At this moment honestly I can’t see a path towards the annexation and right now it appears as if Netanyahu has no choice but to leave that at a kind of declarative stage and not change anything physically on the ground. But beyond that we don’t know.”

If one is wondering where Iqbal got the idea that Israel intends “to annex” parts of what is currently defined as Area C on “the 1st of July”, one distinct possibility is that she read a report headlined “Israel’s new unity government delayed by dispute over cabinet posts” which appeared on the BBC News website’s ‘Middle East’ page on May 14th. 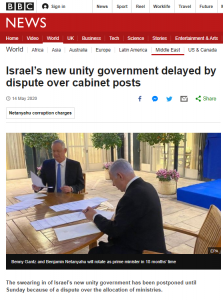 “The two men [Netanyahu and Gantz] have said the new government’s priority will be tackling the economic crisis resulting from the coronavirus pandemic.

Mr Netanyahu has said it will also press ahead with a controversial plan to annex part of the occupied West Bank as early as 1 July.” [emphasis added]

Behind that badly phrased and misleading BBC News presentation lies the fact that the coalition agreement between the Likud party and the Blue & White party includes the date July 1st:

“According to the deal, Netanyahu can advance legislation to annex parts of the West Bank starting July 1, on the condition that the move is supported by the U.S. administration.”

“Gantz and Netanyahu […] agreed that Netanyahu would be able to bring a proposal for annexing parts of the West Bank to a cabinet vote this summer, but only if the United States backs the move and if it is done in coordination with other international players.

Once approved by the cabinet, a proposal to apply Israeli sovereignty over parts of the West Bank would also require approval by the Knesset’s Foreign Affairs and Defense Committee, and then the full Knesset.”

In other words, July 1st is the earliest date that such a process can commence rather than the date – as asserted by Iqbal – on which Israel plans to ‘annex’ parts of Area C. However, as Anshel Pfeffer pointed out at the Jewish Chronicle:

“The coalition agreement between Likud and Blue and White stipulates that Mr Netanyahu can bring the issue of annexation to the cabinet and Knesset from July 1. But it does not say he has to.”

And the Times of Israel reported that:

“Ahead of the swearing-in ceremony, Likud and Blue and White on Wednesday evening released the policy principles of the new government, as instructed by the High Court of Justice. […]

The principles did not specifically mention the annexation of parts of the West Bank, a step that under the coalition deal between Likud and Blue and White can be set in motion as early as July.” 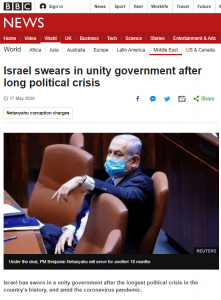 “Israel has sworn in a unity government after the longest political crisis in the country’s history, and amid the coronavirus pandemic.

Under a power-sharing deal agreed in April, right-wing PM Benjamin Netanyahu will serve for another 18 months.

His centrist rival Benny Gantz will serve as deputy PM, before taking over.

The two politicians have agreed to press ahead with a controversial plan to annex part of the occupied West Bank area as early as 1 July.

Palestinian leaders reject the legitimacy of the move.

Mr Netanyahu, who leads the Likud party, and Mr Gantz of the Blue and White party, have also said the new government’s priority will be tackling the economic crisis caused by the coronavirus pandemic.”

Contrary to the impression given by the BBC, the issue of application of Israeli law to parts of Area C was in fact fifth on the list of the new government’s declared priorities rather than first.

Whether or not that issue will be brought to the cabinet on or after July 1st remains to be seen but it is certainly not the case – as suggested in these three BBC reports – that Israel plans to “annex part of the occupied West Bank” on that date.