Previously we have looked at the BBC’s preemptive framing of the as yet theoretical application of Israeli civil law to Israeli communities in Area C – or as the BBC chooses to call it, ‘annexation of parts of the occupied West Bank’.

On May 13th that topic dominated a radio report ostensibly about the visit of a US official to Israel:

On May 14th and 17th the BBC News website inserted that topic into coverage of domestic Israeli politics:

Additional promotion of that topic in the last week was seen a May 14th BBC News website article written by the corporation’s diplomatic correspondent Jonathan Marcus titled “A world in crisis even without the pandemic: Five looming problems”. Among the five potential crises which Marcus claimed have been “forced…off the news agenda” because of the Covid-19 pandemic are a nuclear arms race, climate change and “Israel’s annexation bid in the West Bank”. 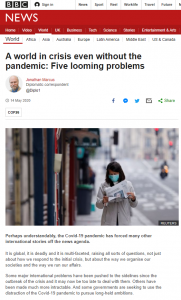 Providing no evidence to support his own speculations concerning linkage between Netanyahu’s legal cases and the potential application of Israeli civil law to parts of Area C, Marcus told BBC audiences that:

“Despite the legal cases that are pending against him – indeed, possibly in part because of them – Mr Netanyahu is proposing a controversial nationalist agenda which includes a desire to annex areas of the Israeli-occupied West Bank, effectively making them a permanent part of Israel.”

Downplaying the fact that the US ‘Peace to Prosperity’ plan proposes the creation of a demilitarised Palestinian state in 70% of Judea & Samaria (a 30% increase in the territory there controlled by the Palestinian Authority) as well as in the Gaza Strip and with compensatory land swaps, Marcus went on to predict the end of the two-state solution.

“Arguably, this would end once and for all any chance of a “two-state solution” – despite provisions for one in Donald Trump’s peace plan – that has been the waning hope of many who want to see a lasting peace between Israel and the Palestinians.”

Marcus failed to clarify that the relevant clauses in the coalition agreement between the Likud and Blue & White specify that:

“With regard to President Trump’s declaration [on the peace plan], the Prime Minister and the Alternate Prime Minister will act in full agreement with the United States, including with the Americans in regard to the maps and with international dialogue on the subject.

They will do “all of this while pursuing the security and strategic interests of the State of Israel, including the need for maintaining regional stability, the preservation of peace agreements and the pursuit of future peace agreements,” it stated.”

Ignoring the fact that the Palestinians rejected the US proposal even before it was published, Marcus went on:

“The Palestinians themselves are already crying foul and several governments in Europe and elsewhere are urging caution, in some cases talking about potential sanctions if this policy goes ahead. As ever, the Trump administration’s position will be crucial. Will it effectively give a green light for the move or will it counsel constraint?

It certainly appears that Mr Netanyahu has been emboldened by President Trump’s decisions to back Israel’s annexation of the occupied Syrian Golan Heights and to move the US embassy to Jerusalem. The current US position is ambiguous, with suggestions that it will make its support of annexation in areas of the West Bank conditional on Israel agreeing to negotiate over a Palestinian state.”

Some analysts believe that having used the issue of annexation to mobilise nationalist support during the election season, Mr Netanyahu may find some way to back down. Maybe the Americans will help, since there is no way hard-line Israeli nationalists want to see any kind of Palestinian state.

But it’s going to be a bumpy period ahead.” 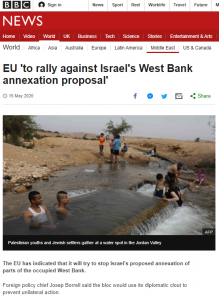 Although no such proposal has yet been presented, readers were informed that:

“The EU has indicated that it will try to stop Israel’s proposed annexation of parts of the occupied West Bank.

“Israel’s incoming unity government has agreed that the process of annexing West Bank settlements and the Jordan Valley could begin as early as July.”

Only in the fourteenth paragraph did readers learn that what may – or may not – “begin as early as July” is the necessary legislative process:

“The terms of the agreement say the legislative process can begin from 1 July and that Mr Netanyahu and Mr Gantz will act “in full agreement with the US… and in dialogue with the international community”.”

“Gantz and Netanyahu […] agreed that Netanyahu would be able to bring a proposal for annexing parts of the West Bank to a cabinet vote this summer, but only if the United States backs the move and if it is done in coordination with other international players.

Once approved by the cabinet, a proposal to apply Israeli sovereignty over parts of the West Bank would also require approval by the Knesset’s Foreign Affairs and Defense Committee, and then the full Knesset.”

Readers of this report were told that:

The same framing appeared in additional reports published the day before and two days later. As usual BBC audiences heard nothing of alternative legal opinions or of the status of that territory before the Jordanian occupation of 1948 – 1967. The failure to provide that information is particularly relevant given the BBC’s use of the term ‘annexation’ which is defined as:

“…a unilateral act of a State through which it proclaims its sovereignty over the territory of another State.”

The territory currently defined as Area C is of course not “the territory of another State” but the BBC evidently has no interest in providing its audiences with the full background information which would enhance their understanding of the topic, preferring instead to produce report after report promoting uniform but partial preemptive framing of an event which has yet to happen.