The BBC has shown significant interest in a number of recent incidents at various sites in Iran and the July 10th edition of the BBC World Service radio programme ‘Newshour’ opened (from 0:22 here) with an item about what presenter James Coomarasamy described as “a string of fires and explosions at sensitive locations”. 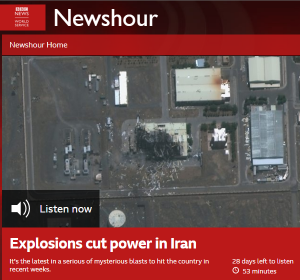 Naderi: “Unfortunately what is happening in Iran have many things to do with the fact that the government is incompetent and at the same time, those in charge of these important places are not doing their jobs properly.”

Coomarasamy, however, had another theory:

Coomarasamy: “You’re talking about incompetence there. Do you think the people think that’s what this is or do they suspect that there are other issues at play here?”

Naderi spoke of “sanctions and the fact that we can not get the spare parts” and claimed that “people don’t care about safety” in workplaces. In response to a question from Coomarasamy about what political leaders say, he noted that they were “blaming the outside powers”, including the US government and sanctions.

Coomarasamy: “If though you look for example at the images coming from Natanz where there was an explosion on the 2nd of July, you see that the aerial shots and it certainly would appear potentially that there was some kind of attack – missile attack [sic]. Is the government not potentially justified in blaming outside powers for at least some of this?”

Naderi noted that with regard to Natanz “our officials are not ruling out the, you know, cyber-attack or some kind of, you know, bombing”, adding that he thinks “there was some kind of attack by foreign forces” at that particular site but insisting that the authorities are “not competent enough to take care of these sensitive places”.

The rationale behind Coomarasamy’s line of questioning became clearer when he introduced (at 4:56) his second interviewee, BBC diplomatic correspondent Jonathan Marcus.

Coomarasamy: “So, is this a string of coincidence or could something else be going on? Today the Iranian foreign ministry spokesman said it was premature to say that the country’s main regional adversary Israel might be responsible for that nuclear plant explosion. […] Jonathan, could Israel or someone else be responsible for this?”

Having mentioned “ailing infrastructure, inefficiency” and “all sorts of reasons why things could go wrong”, Marcus went on to state that in his opinion the incident in Natanz looks “the most likely one of these attacks [sic] to have been carried out by some kind of external actor”.

Marcus: “But then of course this is part and parcel of a kind of war that is going on in the region between Israel – and perhaps to an extent the United States but certainly Israel – and Iran. And it’s a battle that’s being fought out on a number of fronts…ah…efforts to constrain Iran’s nuclear programme, cyber attacks by Iran against Israel and by Israel against Iran and of course actual kinetic…eh…eh…heavy metal attacks if you like, with the Israelis regularly striking at Syrian forces…eh…Iranian forces in Syria.”

Coomarasamy: “Yes and the Israeli foreign minister asked about the incident said ‘our actions in Iran are better left unsaid’. But if it were to be the case that Israel had been behind at least that particular explosion, what would be the logic of the timing? What would be the impact of doing that now mean?”

Marcus merely expanded on the points he had made previously:

Marcus: “…Well much depends on the timetable of Iran’s nuclear programme and how much the Israelis know about what’s going on, if indeed it was them. They may feel they have a more compliant American administration under which to do this at the moment although I think this is a matter that the Israelis clearly see as being an issue of vital national security so I’m not sure that the American view necessarily counts for much. As I say, look there is a full-scale battle being waged between Israel and Iran. The air attacks by the Israelis on Iranian forces in Syria have not stopped. There were quite significant attacks again quite recently. That’s intended both to prevent the implantation of Iranian forces in Syria but also to prevent this project that the Iranians are pursuing to increase the accuracy of the long-range missiles that they’re supplying to their proxies and allies in the region, so it has two dimensions. The cyber thing is very interesting because back in April the Israelis say that there was a cyber attack aimed at their water distribution system. It wasn’t tremendously effective but they saw the Iranian Revolutionary Guard as being behind it and a few weeks later, in May, there was a very significant cyber attack against a port in Iran. That was…computers went down, there was chaos for the best part of a week, ships queuing, trucks queuing and so on. And that is widely seen as quite a clear warning to the Iranians from the Israelis that if they want to pursue this cyber dimension of their…their conflict and their rivalry then the Israelis can give back in spades whatever it may be the Iranians are proposing to do.”

Of course the BBC has no factual and complete information concerning the explosion in Natanz or the other incidents elsewhere in Iran. Nevertheless we see that BBC World Service listeners were provided with four whole minutes of pure guesswork on the topic of who was behind the event and why, with that speculation focusing on one sole possibility.

That editorial choice is all the more remarkable when one considers that four days earlier the BBC News website had published an article by Jiyar Gol of BBC Persian which opened as follows: 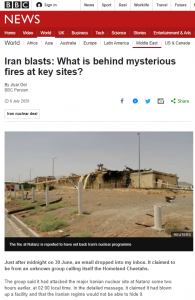 “Just after midnight on 30 June, an email dropped into my inbox. It claimed to be from an unknown group calling itself the Homeland Cheetahs.

The group said it had attacked the major Iranian nuclear site at Natanz some two hours earlier, at 02:00 local time. In the detailed message, it claimed it had blown up a facility and that the Iranian regime would not be able to hide it.

The group said it was composed of dissidents within Iran’s military and security forces and that they had been behind numerous attacks that the Iranian authorities had so far concealed from the public.”

However that article (and a subsequent one) also closed with the promotion of conjecture:

“In a rare acknowledgement, Iran’s state news agency Irna said the fire at Natanz could have been the result of sabotage “by hostile countries, especially the Zionist regime [Israel] and the US”.

Iran’s civil defence chief has vowed to “respond” if it turns out Iran was the victim of a cyber attack.

On Sunday, an unnamed “Middle Eastern intelligence official” told the New York Times Israel had caused the blast at Natanz. Just a day earlier, Israel’s foreign minister responded obliquely when asked if Israel was behind the incident, saying “our actions in Iran better left unsaid”.

Israel does not normally take responsibility for these kinds of “attacks”, and Iranian officials have avoided blaming Israel directly. But it seems the cyber war between the two countries has already started.”

Notably, the guesswork-based ‘analysis’ provided by Coomarasamy and Marcus did not mention the Iranian dissident group that had contacted BBC Persian or indeed any additional possibilities other than Israel.