Most of the BBC’s reporting on the security incident which took place on the afternoon of July 27th at Har Dov in northern Israel was produced by Tom Bateman of the corporation’s Jerusalem bureau.

As we noted in a previous post relating to coverage of that incident, the BBC had not reported an incident in Syria a week earlier (which was attributed to Israel by foreign sources) or the subsequent announcement by Hizballah of the death of one of its members in that incident and threat of a revenge attack.

Listeners to the news bulletin aired in BBC Radio 4’s ‘PM’ programme on July 27th (from 03:15 here) would hence be unlikely to have any idea of what newsreader Zeb Soanes and Tom Bateman were referring to in their context-free portrayal of the death of a member of the terrorist organisation. [emphasis in italics in the original, emphasis in bold added]

Soanes: “Israel says it has thwarted an attempted attack by Hizballah militants in a border area with Lebanon. Tensions have been rising since the group said Israel killed one of its fighters last week. From Jerusalem, here’s our Middle East correspondent Tom Bateman.”

Bateman: “Israel says a militant squad armed with assault rifles crossed a few meters into its territory, planning to carry out an attack. Israeli troops aimed tank and gunfire at the group, who fled back towards Lebanon while exchanging fire. Their condition isn’t clear while Israel says none of its troops was harmed. The border between Israel and Lebanon is combustible. A flare-up appeared inevitable after an air strike attributed to Israel in Syria last week killed a Hizballah fighter. The group has previously vowed to avenge the deaths of its members.”

BBC World Service radio audiences also heard a report from Bateman on July 27th in the evening edition of ‘Newshour’ (from 30:08 here).

Presenter Tim Franks was notably careful to disassociate the BBC from the word ‘terrorists’, despite Hizballah being widely designated as a terrorist organisation.

Franks: “The Israeli authorities have said that they’ve repelled an attempt by the Lebanese…ah…militant group Hizballah to infiltrate across the border. The Israeli army first said that – in its words – the terrorists fled back to Lebanon after being shot at. This evening the prime minister Binyamin Netanyahu appeared on TV to warn that the Islamist group were, in his words, playing with fire. For its part Hizballah has denied engaging in any operation on the border. Tom Bateman is our Middle East correspondent in Jerusalem.”

Bateman made no attempt to clarify to listeners that the Shebaa Farms (Har Dov) area is part of the Golan Heights, as confirmed by the UN, rather than – as claimed by Hizballah – Lebanese territory.

Bateman: “Well there was clearly an incident and it seems pretty clear that it involved Hizballah militants in this disputed area of Shebaa Farms between Lebanon and across the line in the Israeli-occupied Golan Heights. Israel says that this group of between three and five men armed with assault rifles was tracked by its field intelligence cameras, that it followed them using its cameras and watched as they crossed, they said, several meters over the line into Israeli-controlled territory, at which point it says that its troops used small arms and tank fire against them and also launched artillery shells to create a smoke screen as a defensive tactic, they say. But the bottom line from the Israeli military is they say they clearly had hostile intent and were going to carry out an attack.”

Bateman continued with ‘he said/she said’ amplification of the terrorist organisation’s spin.

Bateman: “Now Hizballah after a couple of hours said that this was not the case, that its men didn’t fire on the Israelis because Israel said there was an exchange of fire as the Hizballah men then fled. It accuses Israel of lying over this incident and says that it will still retaliate or respond to the death of one of its fighters allegedly at the hands of Israel in Syria last week. It says that retaliation will inevitably come.”

Interestingly, Bateman had nothing to tell audiences about UN Security Council resolution 1701 or the supposed role of the UN peacekeeping forces in Lebanon in preventing such incidents along the border. Neither did he or Franks adequately clarify that the threats to ‘retaliate’ against Israel come from a foreign-backed terrorist organisation which is part of Lebanon’s government.

In response to Franks asking “what do we know for sure” about the July 20th strike on military sites south of Damascus, Bateman replied:

Bateman: “Well I mean Israel routinely carries out airstrikes in Syria. Its intention is to roll back the influence of Iran in Syria and also of weapons transfers from the Iranians to Hizballah which is fighting in Syria on the side of President Assad. Now that is a red line for Israel, particularly the development by Hizballah, or its plans for precision guided missiles. Now what happened last week according to Hizballah when Iranian backed militants were targeted, one of its fighters died in those Israeli strikes close to Damascus airport. Israel doesn’t confirm that, hasn’t confirmed that, but Hizballah has said previously that it will avenge any of these strikes and so the Israelis were clearly expecting something; a flare-up on the border. They were beefing up infantry troops over the last few weeks and also missile defence systems.”

Hizballah has in fact said that it would retaliate if its members were killed in such strikes rather than to the strikes themselves and the increased military activity on Israel’s side of the border took place over the last week – rather than weeks – following Hizballah’s threats after the July 20th incident.

Franks: “I guess the concern in both Israel and in Lebanon is that sometimes these sorts of apparently small-bore clashes can mushroom into something much bigger.”

Bateman closed with promotion of equivalence between a sovereign country and a terrorist organisation.

Bateman: “This is one of the most combustible borders in the region. And remember in 2006 that Israel and Hizballah fought a war after the killing of Israeli troops over that border. And we’ve seen how close conflagration has come. There was a similar incident in the autumn: two Hizballah fighters killed in Syria and then the group fired an anti-tank missile, narrowly missing Israeli troops across the border. And the point is, I mean, there is a prevailing wisdom – and I think it’s true – that neither side seeks a clear escalation into war, particularly with health and economic and political crises in both countries. However the balance of power between the two is such that they always need to be seen by their own constituents to respond to these kind of events and you can see how very easily things can slip out of control.”

Tom Bateman also contributed ‘analysis’ to a report which appeared on the BBC News website’s ‘Middle East’ page on the evening of July 27th under the interestingly punctuated headline “Israel ‘thwarts Hezbollah infiltration from Lebanon’”. 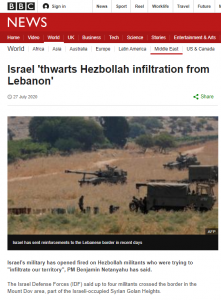 Bateman appeared to be unsure about the intentions of armed members of a terrorist organisation who infiltrated a border.

“Exactly what these militants had in mind when they crossed a few metres from Lebanon into Israeli-controlled territory isn’t clear.”

In the article itself readers found a ‘he said/she said’ account of events as well as the inaccurate claim that the July 20th incident took place “in the early hours of last Monday” rather than on the evening of Monday, July 20th.

“The area has been tense for days after the death of a Hezbollah fighter.

He was killed in an alleged Israeli air strike in Syria. Israel, which has neither confirmed nor denied it carried out the strike in the early hours of last Monday, had warned Hezbollah not to retaliate.”

“Hezbollah, which is heavily armed and funded by Israel’s arch-foe Iran, is the most powerful armed force in Lebanon alongside the Lebanese army. It operates predominantly in the south of the country and along with its political allies is an influential force in the government.”

Once again BBC audiences were told nothing of the UN Security Council resolution intended to prevent Hizballah from ‘operating’ in southern Lebanon or the failure of UNIFIL to enforce that resolution. The writer of this report also had no comment to make about “an influential force in the [Lebanese] government” issuing threats to a neighbouring country.

“However, the [Hizballah] statement warned that a response to the death of its fighter was “definitely coming”.”

“Israel and Hezbollah are bitter enemies who fought a month-long war in 2006 after Hezbollah killed eight Israeli soldiers and abducted two in a cross-border raid.

The ensuing conflict killed some 1,191 people – mostly civilians – in Lebanon, and 121 soldiers and 44 civilians in Israel.”

Last year, following a complaint from CAMERA UK, the BBC amended three separate reports which made the same highlighted claim. As we noted at the time:

“While the Lebanese authorities did not differentiate between civilians and combatants during the 2006 war, Lebanese officials did report even before the conflict was over that some 500 of the dead were Hizballah personnel and UN officials gave similar figures while Israeli estimates stand at around 600 (of whom 450 were identified with certainty: see page 55 here).

In August 2006 the BBC News website acknowledged that “there are no reliable figures” for the number of Hizballah combatants killed in the war that had just ended at the time.”

Notwithstanding those three corrections, that misleading statement is now being promoted once again.