Residents in the Western Negev region of Israel have seen the renewal of attacks from the Gaza Strip using airborne explosive devices in recent days. 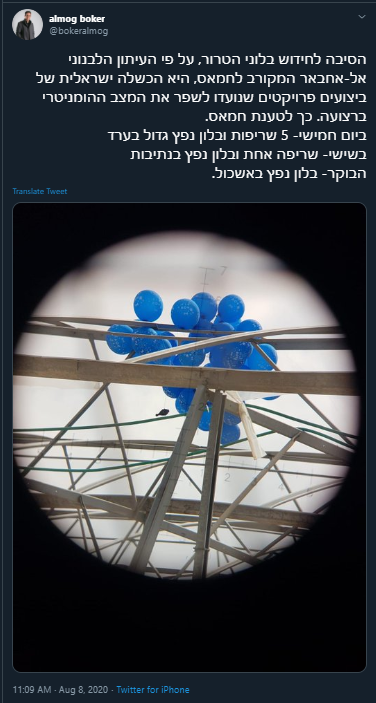 “A bunch of balloons bearing a suspected explosive device launched from the Gaza Strip into Israel was found by residents of Kibbutz Nir Oz in a nearby agricultural field, the Eshkol Regional Council said on Saturday morning. No injuries were reported.

The council said police sappers were on the scene to neutralize the device, which appeared to be some sort of grenade. […]

At least three brush fires were ignited in southern Israel on Thursday by balloons carrying incendiary devices that were launched from Gaza, the fire department said, sparking concern over a possible return of the phenomenon. […]

Throughout the day, several blazes were reported in the Hof Ashkelon and Eshkol Regions, northeast and east of the Gaza Strip, respectively. The fires were quickly brought under control. No injuries were reported as a result of the blazes.

An investigation into the cause of the fires determined that they were sparked by balloon-borne incendiary devices, the southern division of Fire and Rescue Services said.”

As has been the case in the past, the those events appear to be connected to the transfer of funds from Qatar to the Gaza Strip. Kan 11 reported that the Lebanese newspaper Al Akhbar had quoted anonymous sources as saying that tensions along the Israel-Gaza Strip border would increase, citing among other things the fact that the monthly instalments of Qatari aid will come to an end this month and the Gulf state has shown no intention of extending it for another half year.

Ha’aretz reported having been told by a “senior Hamas official” that “the balloons carrying explosives or incendiary materials that have been launched into Israel in recent days are meant to send a message to Israel and to international bodies” and that “payment of $100 to poor families, financed by Qatar, […] was insufficient”.

If BBC audiences are wondering why they have heard nothing about those distinctly transparent threats, the renewal of attacks using incendiary balloons and the fires they have caused, it is worth noting that since such attacks began nearly two and a half years ago, the corporation’s Jerusalem bureau staff have produced very little  reporting on the subject of the arson attacks and no coverage at all of the attacks using airborne explosive devices.

A ‘GREAT RETURN MARCH’ STORY BBC AUDIENCES HAVE NOT BEEN TOLD