Back in 2018 we documented how it took the BBC three months to get round to producing one short report about the arson attacks perpetrated by Palestinians in the Gaza Strip within the framework of the ‘Great Return March’ which resulted in the destruction of thousands of acres of nature reserves, woodland and farm land in nearby Israeli communities.

In 2019 we noted that the BBC had ignored a new threat to Israeli civilians living in the Western Negev – airborne explosive devices. 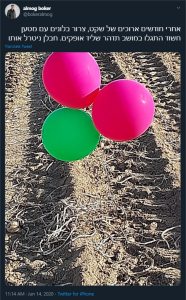 A ‘GREAT RETURN MARCH’ STORY BBC AUDIENCES HAVE NOT BEEN TOLD

On June 14th such a device was discovered near Moshav Tidhar.

“A cluster of balloons carrying a suspected explosive device that was apparently launched from the Gaza Strip landed outside the southern Israeli community of Tidhar on Sunday morning, local officials said.

A police sapper was sent to the scene to remove the suspicious object, a police spokesperson said. […]

It was the first such balloon-based cross-border attack in several months, though a small number of balloons without suspected explosives attached to them have been flown over the border during that time.”

The Times of Israel also noted that:

“The incident came against the backdrop of growing threats by groups associated with terrorist organizations in the Strip to resume the practice of these airborne explosives and arson devices into Israel, having stopped in February as Israel and the Gaza-ruling Hamas terror group began negotiating a long-term ceasefire and prisoner exchange.

In an interview with Palestinian television on Saturday, leading Palestinian Islamic Jihad member Ahmed al-Modallal indicated that terror groups were giving the practice a green light, saying the balloons were being launched by “youths who are letting out their emotions and responding to their distressed lives in Gaza that have no horizon.””

Notably, BBC audiences have still not seen any meaningful reporting on the issue of the Israeli civilians being held by Hamas.

The context to that green light apparently has more to do with cash than “emotions”.

“If Israel does not allow Qatari aid money to reach the Gaza Strip, Hamas could soon act to end the calm which has prevailed in recent months and renew nightly operations as soon as next Friday, Palestinian sources told Kan news on Saturday.

The source further told Kan that if the condition was not met in two weeks, Hamas would start sending units to “penetrate” the Gaza border fence and potentially enter Israeli territory. […]

It was not immediately clear why Hamas was blaming Israel for the delay in the funds’ arrival.

Mohammed al-Emadi, the head of the Qatari Gaza Reconstruction Committee, had been anticipated in the Gaza Strip this week to distribute $150 million in financial aid, Ynet reported last week. Al-Emadi had not traveled to the Strip since late February, citing health concerns linked to the ongoing coronavirus pandemic.”

Kan 11’s Palestinian affairs correspondent Gal Berger cited a Palestinian website’s report according to which the Qatari envoy clarified that the reason for the delay of the cash transfer is the Covid-19 pandemic rather than the target of the threats made by Hamas, Israel.

Unsurprisingly given their record, the BBC’s Jerusalem-based staff have to date shown no interest in reporting the return of the use of balloons to terrorise Israeli civilians or the threats made by Hamas.

WHAT CAN BBC AUDIENCES EXPECT IF THE ‘GREAT RETURN MARCH’ RETURNS?