The Israel Security Agency’s report on terror attacks (Hebrew) during August 2020 shows that throughout the month a total of 120 incidents took place: 67 in Judea & Samaria, 39 in Jerusalem and inside the ‘green line’ and 14 in the Gaza Strip sector.

One civilian was murdered during August and six people (two civilians and four members of the security forces) were wounded. 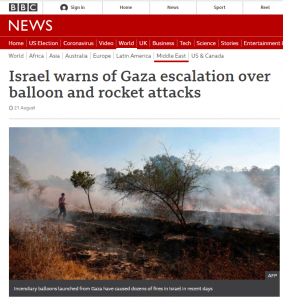 On the evening of August 21st the BBC News website reported that:

Since last week, a number of rockets have been launched from Gaza along with hundreds of balloons with explosives and incendiary devices attached that have caused dozens of fires in southern Israel.”

The “number of rockets” mentioned by the BBC included one on August 2nd, two on August 16th and one on August 18th which were not reported when those attacks took place. After the publication of that BBC report mentioning the twelve rockets launched in two incidents late on August 20th and early on August 21st, another rocket attack took place and on August 28th a further six rockets were fired from the Gaza Strip. Neither of those attacks received coverage on the BBC News website.

In other words, BBC audiences learned of less than half of the 25 rockets launched from the Gaza Strip during August that were recorded by the ISA.

Since the beginning of the year visitors to the BBC News website have seen coverage of 5.2% of the terror attacks against Israelis which actually took place and reporting of 50% of the resulting fatalities. BBC coverage of rocket attacks launched from the Gaza Strip in 2020 stands at 14.8% as of the end of August. Six of the first eight months of 2020 saw no BBC reporting on Palestinian terrorism at all.